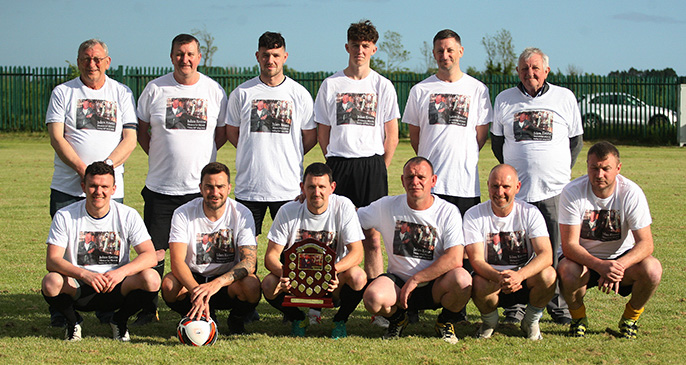 In front of a huge attendance at St. Martins Park on Friday night, the Johnville/Keane Selection just edged out the Blues Legends in an eight goal thriller.
The game was in memory of the late Jakes Keane a man who gave so much of his time to the Schoolboy section of Johnville FC. With the sun shining down on a wonderful occasion, both teams lined up to be greeted by former Blues star Alfie Hale and Mayor of Waterford Cllr Joe Kelly. The Blues Legends were out in force with Kyle Cooke putting in a wonderful display between the posts. Paul Cleary, Alan Barry, David Breen and Mock Reid made up the back four. In midfield Paul Cashin, Rocky Maher, John Frost and Paul Deveraux kept things ticking over. Up front Daryl Murphy hit two cracking goals and his strike partner Paul Quilty scored The Blues Legends third goal. 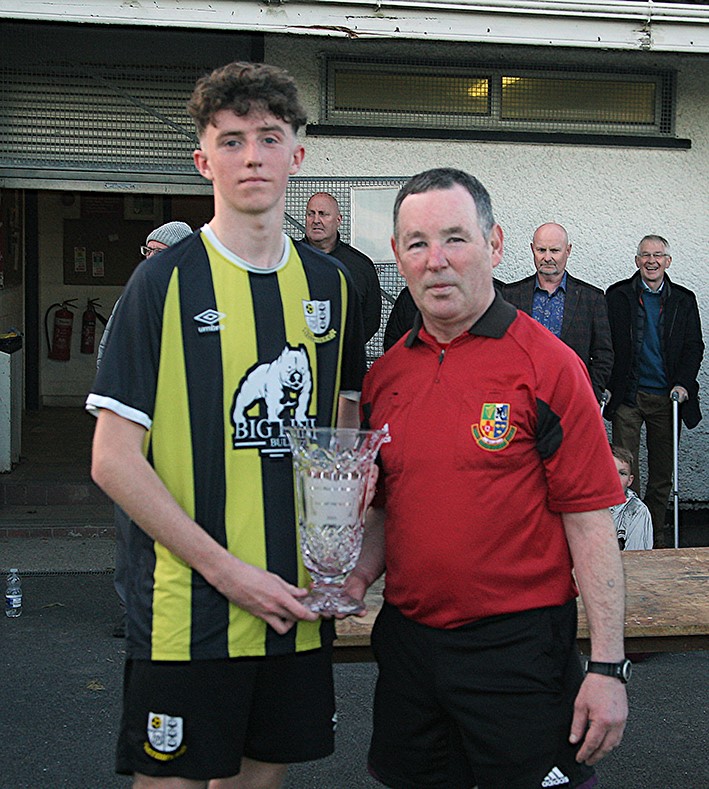 Jake Keane is presented with his MOTM Award by referee Noel Purcell.

The Johnville/Keane Selection did of course feature all of the late Jakes Keane’s family. Gary Keane partnered Kenny Browne at the back with Simon and Johnny playing at full back. In the middle, John Lacey, Jason and Craig Keane played some exciting football. Former Blues star Paschal Keane thrilled the crowd with some neat and clever touches showing many of his skills. Gary Kelly and Michael McDonagh (2) hit three cracking goals for the Johnville/Keane Selection and Adam Murphy knocked home goal number four.
Special praise must go to Jake Keane, who played the game of his life in honour of his dad. Young Jake won the Man Of The Match Award which was presented by referee Noel Purcell. Jake also captained the Johnville/Keane Selection and his mum Nuala made that presentation. It was also fitting that Jake scored the last goal of the game in memory of his late father. It was indeed a fantastic tribute to a great football man the late Jakes Keane. May He Rest In Peace.

The Blues Legends squad that played the Johnville/Keane team in the Jakes Keane Memorial fixture.