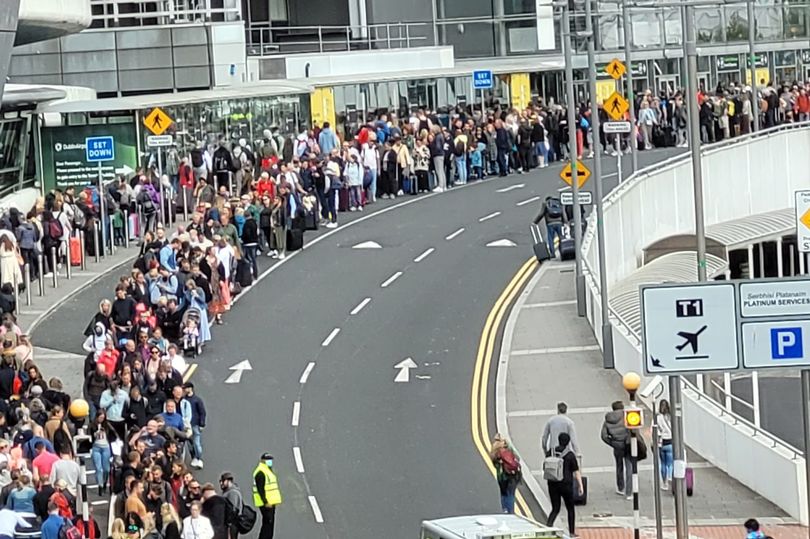 THOUSANDS of people queued up outside Dublin Airport at the weekend, just to get access to check-in and security desks. I watched the videos online and couldn’t help but feel devastated for all of them, but especially those with small children. Nobody likes queuing but I’ll tell you who hates it more than anyone – toddlers. They are not used to it. They cannot understand why they are standing under a blistering sun (it was quite hot in Dublin on Sunday), moving at a snail’s pace. They have been promised the time of their lives. More than likely they will have been looking forward to this day for weeks and months, buoyed by the thoughts of beaches, swimming pools and kids discos. And now, according to Dublin Airport, over 1,000 people missed their flights because they never got next to near an airport. I know there are worst things happening in the world but I just can’t stop thinking about that family, giddy with excitement, getting up at four in the morning, packing the car and heading off to the big smoke filled with hopeful anticipation, only to end up putting the bags back in the car and driving home again. It’s a disgrace and it’s all down to the fact that Dublin Airport left so many staff go during Covid-19 and have been unwilling or unable to replace them.

I was walking past an office in Waterford City last week and saw two people queuing outside. A sign on the door said that the company were “working behind closed doors” and would not be able to facilitate a waiting area “because of Covid-19”. It doesn’t take a behavioural psychologist to know that this company got used to not having to deal with so many members of the public and are choosing to keep the Covid restrictions going. It doesn’t matter that even the Department of Health has stopped issuing updates on coronavirus cases. History will look back at this period of Irish history as the “Covid Hangover”.

Our entire lives were put on hold for two years and unfortunately restarting them is a lot like getting a factory furnace going again – it takes time. Hospital waiting lists have doubled and trebled, which has undoubtedly put lives in danger and children in dire need of support services have been put even further back down the list.

I’d call for a Covid-19 inquiry except I know that reviews and inquiries in this country are just an excuse to put a load of people on a public funded gravy train. The amount of inquiries that have started – to great expense – and then have never seen the light of day would genuinely make you shake with anger. Still, when you look back at some of the things that went on during Covid, you have to wonder what kind of people are leading us at all.

Remember the days when you could go into some shops, but not others. Did we ever stop to think about the actual madness of that or were we all blinded by fear? I’m not saying that Covid-19 wasn’t something to be fearful of but the inconsistencies of the restrictions were just mind-numbing. We could pack into Aldi but the shop selling bikes around the corner had to close – even though they would never have more than five or six people in the premises at a time anyway.

What was even more dumbfounding was being in a shop, but only being allowed to buy certain things. There are times when I’m walking down the street that I’ll be stopped in my tracks by the image of tape covering toys and Christmas decorations. It was absolutely insane. And, listen, I know we all happily drank our way through the lockdowns but nobody has ever been able to tell me why Off Licences were deemed to be essential services and allowed to stay open, while clothes shops and shops selling electrical items etc were forced to close.

Skipping back to today, though, there’s nobody that can persuade me that the prices of goods and services are shooting up because of the war in Ukraine. Covid is still messing with our heads and our pockets. Remember, prior to March 2020, we were able to get an early bird in a restaurant? That seems to be a thing of the past now. Everything has gone up in price, and nobody can give me a definitive answer as to why.

For the record, as most readers of this column will know, I was never an anti-vaxxer or an anti-masker. I always had respect for the virus but with a healthy amount of scepticism about how our Government and our hospitals were dealing with it. Last month, a friend of mine was attending University Hospital Waterford with his partner, who was having an important operation. He went down to get a coffee while he waited and was spotted by security. Imagine that, a non-medical professional walking around the hospital. He was told to leave the hospital and wait for his partner outside. All because of an illness, which nobody seems to care about anymore.