A wonderful weekend of GAA festivities in Dunhill 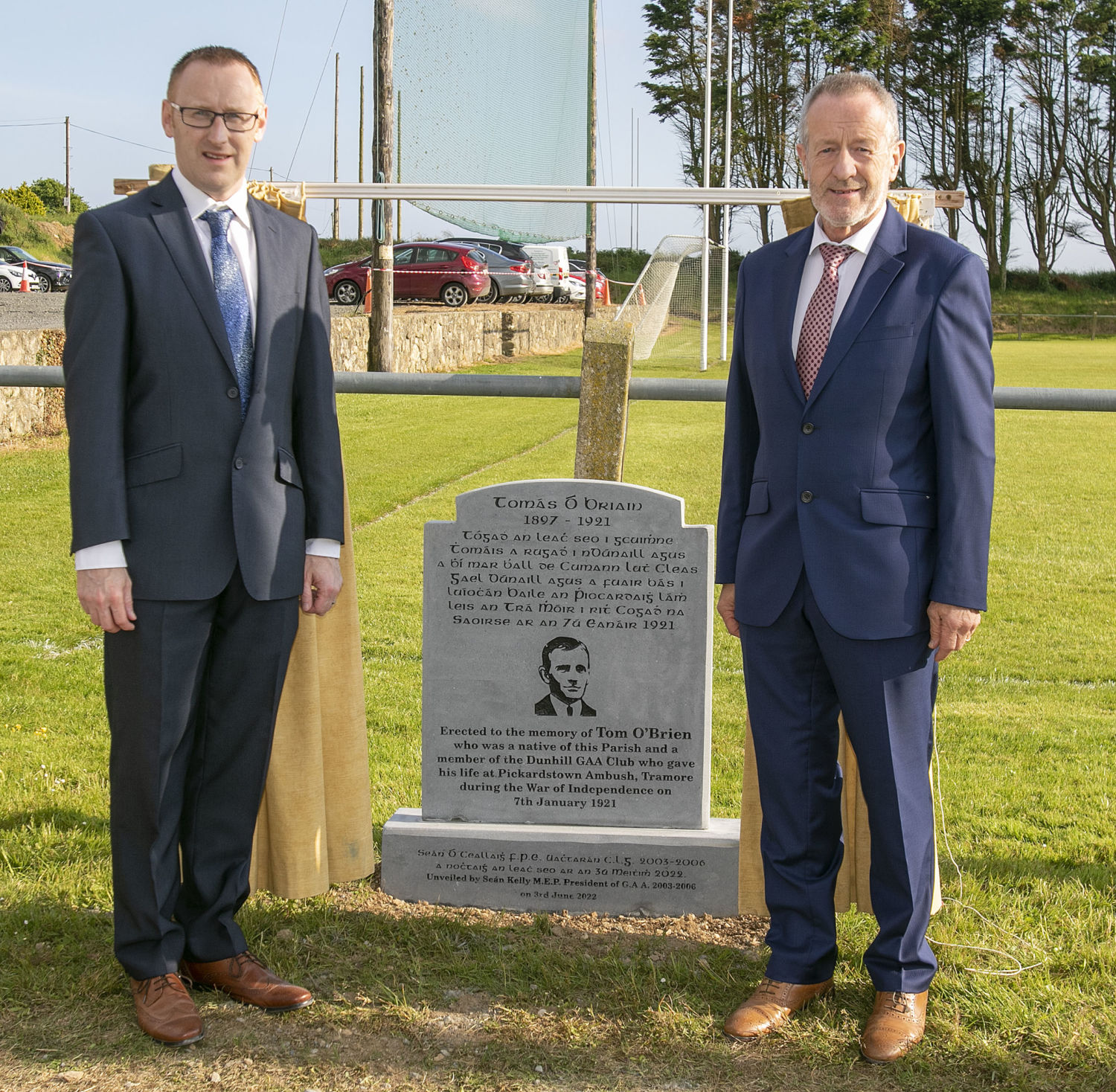 A weekend of festivities took place in Dunhill over last weekend to mark the 100 years since the death of local club man and patriot Tom O’Brien in the Pickardstown Ambush outside Tramore coinciding with the launch of the splendid publication by Senan Cooke of The History of Dunhill GAA Club.
The events of the weekend were a huge undertaking by a club with a great tradition stretching back to the founding years of the GAA and has always been to the fore in the development of its grounds and facilities for the sporting and cultural needs of a thriving rural community.
The celebrations got under way on Friday evening with the launch of Senan Cooke’s impressive publication of over 400 pages of intensely researched, written and pictorial, material from the earliest days of Dunhill GAA to the present time. 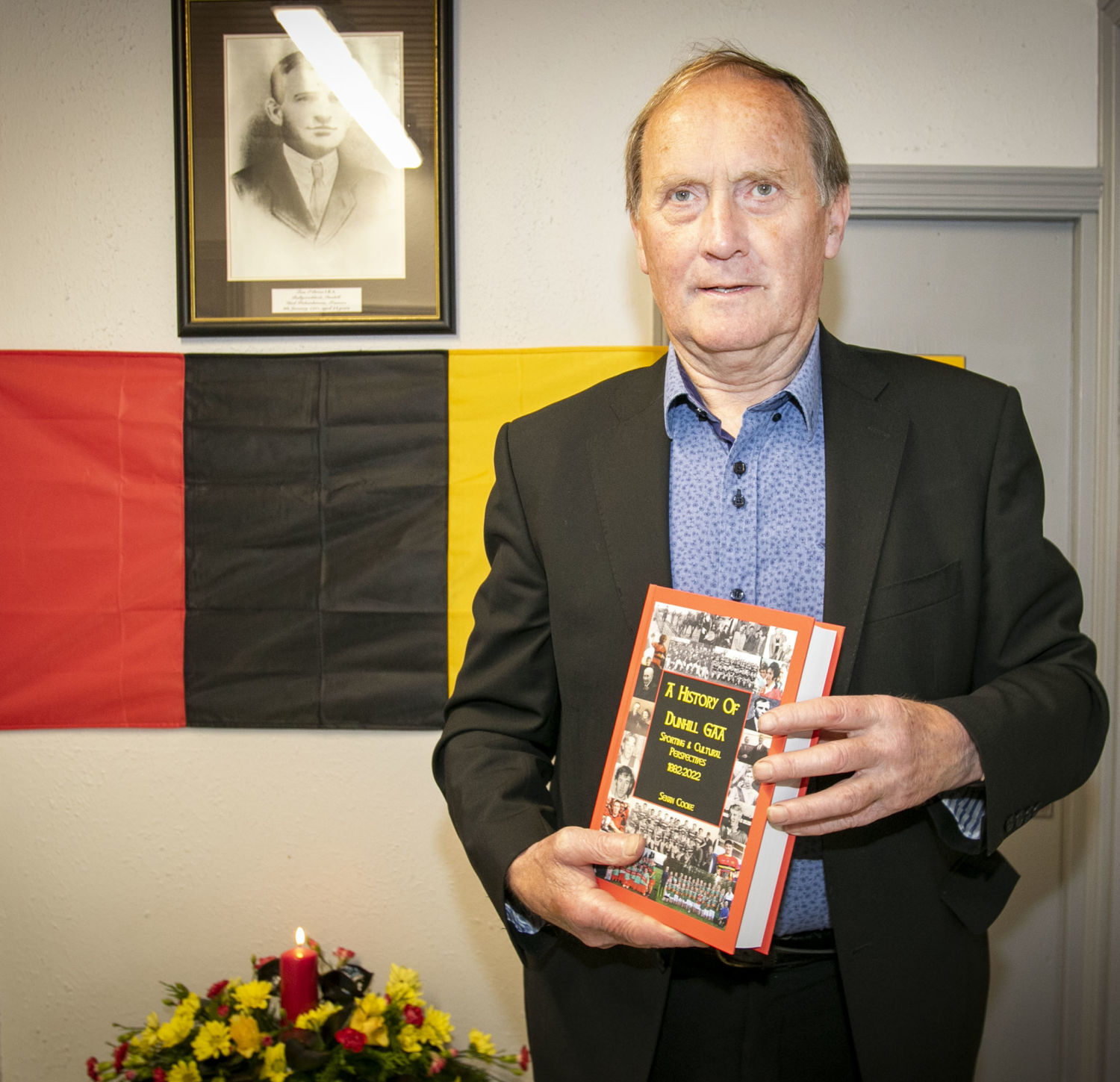 Senan Cooke at the launch of his book, A History of Dunhill GAA.

There was a great gathering of guests and club members at the splendidly appointed GAA Centre where stories of the halcyon days of the great Dunhill Hurling Tournament of the late fifties and early sixties were recalled by players of that generation such as Jim Treacy of Kilkenny and Bennettsbridge, Noel Lynam former player and present President of Glen Rovers GAA and Martin Og Morrissey and Larry Guinan of Mount Sion.
The Tom O’Brien Commemoration Plaque was unveiled by former GAA President Sean Kelly MEP and will later be given a permanent place at the entrance to the club grounds named after O’Brien.
After some refreshments and live music the company adjourned to the main hall where well known historian and Barker Street native Pat McCarthy, an outstanding authority on the War of Independence and the Civil War, gave a riveting presentation on the history of the East Waterford Brigade IRA and the details leading up to, and surrounding, the Pickardstown Ambush and the deaths of Tom O’Brien and Micheal McGrath, the latter being the person after whom the Tramore GAA club is named. 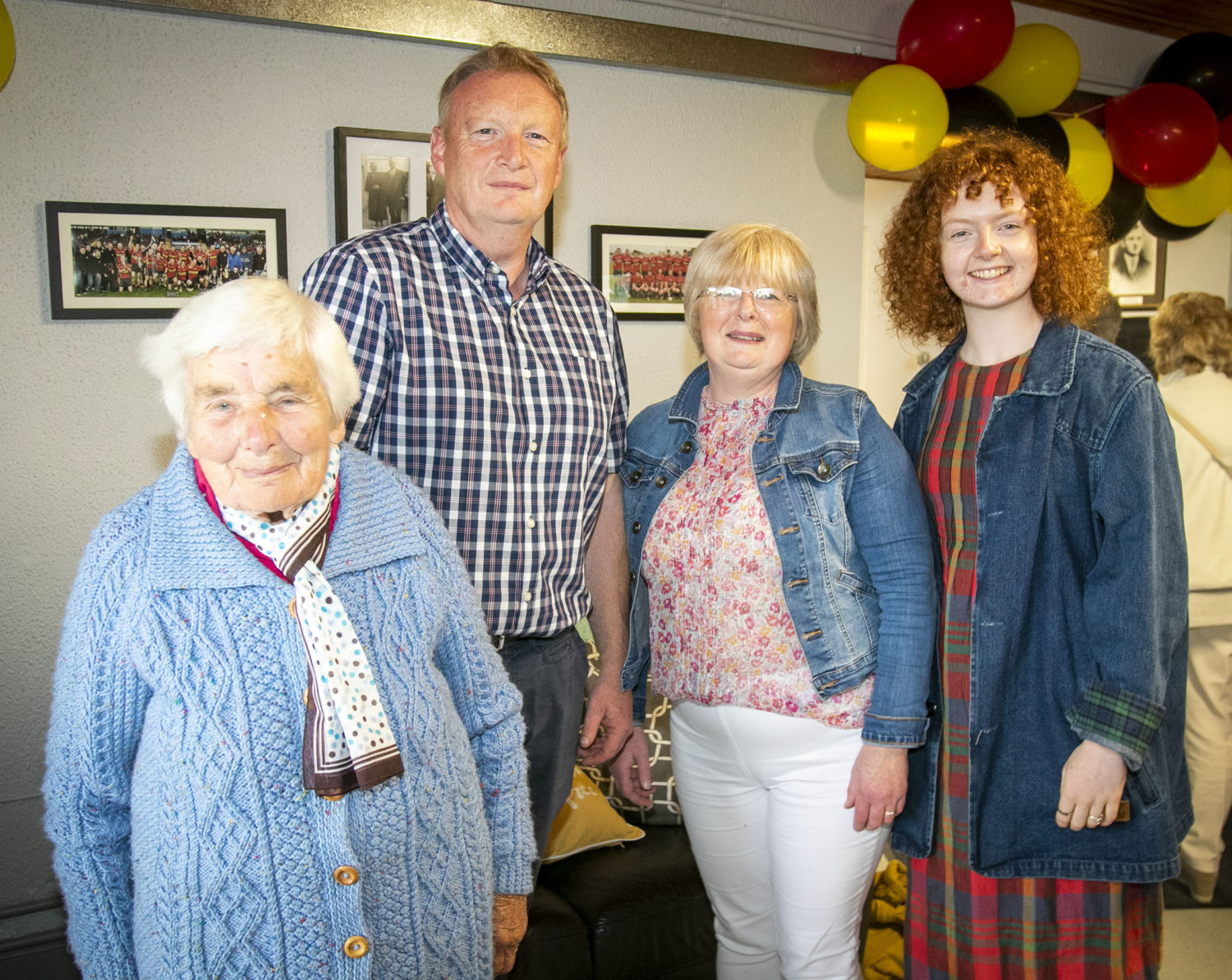 Mary Power, Joe Power, Catherine Kavanagh and Eimear Power at the launch of A History of Dunhill GAA.

Other guest speakers included County and City deputy Mayor Jim Power of Rathgormack and County Board chairman Sean Michael O’Regan. Author Sean Cooke gave a detailed account of his research for the book and thanked the many people who had assisted him along the way.
The book was then officially launched by Sean Kelly who was fulsome in his praise of Senan Cooke and his work. It was, he said, a great achievement on his part and that of the Dunhill club whose achievements on and off the field down through the years showed just what a small club in a rural community could achieve. He said all clubs should have such a history written and Senan’s publication was one of the finest he had seen.
The evening concluded with an address by Dunhill Chairman Niall Dunphy who thanked all for their attendance and paid tribute to Senan Cooke for his work in compiling such a detailed club history and his contribution to the Dunhill Club and community down through the years.
Saturday was a day of celebration across the community with numerous events including a senior hurling tournament game between Dunhill and Carrick Davins as well as juvenile activities in hurling, camogie and football. 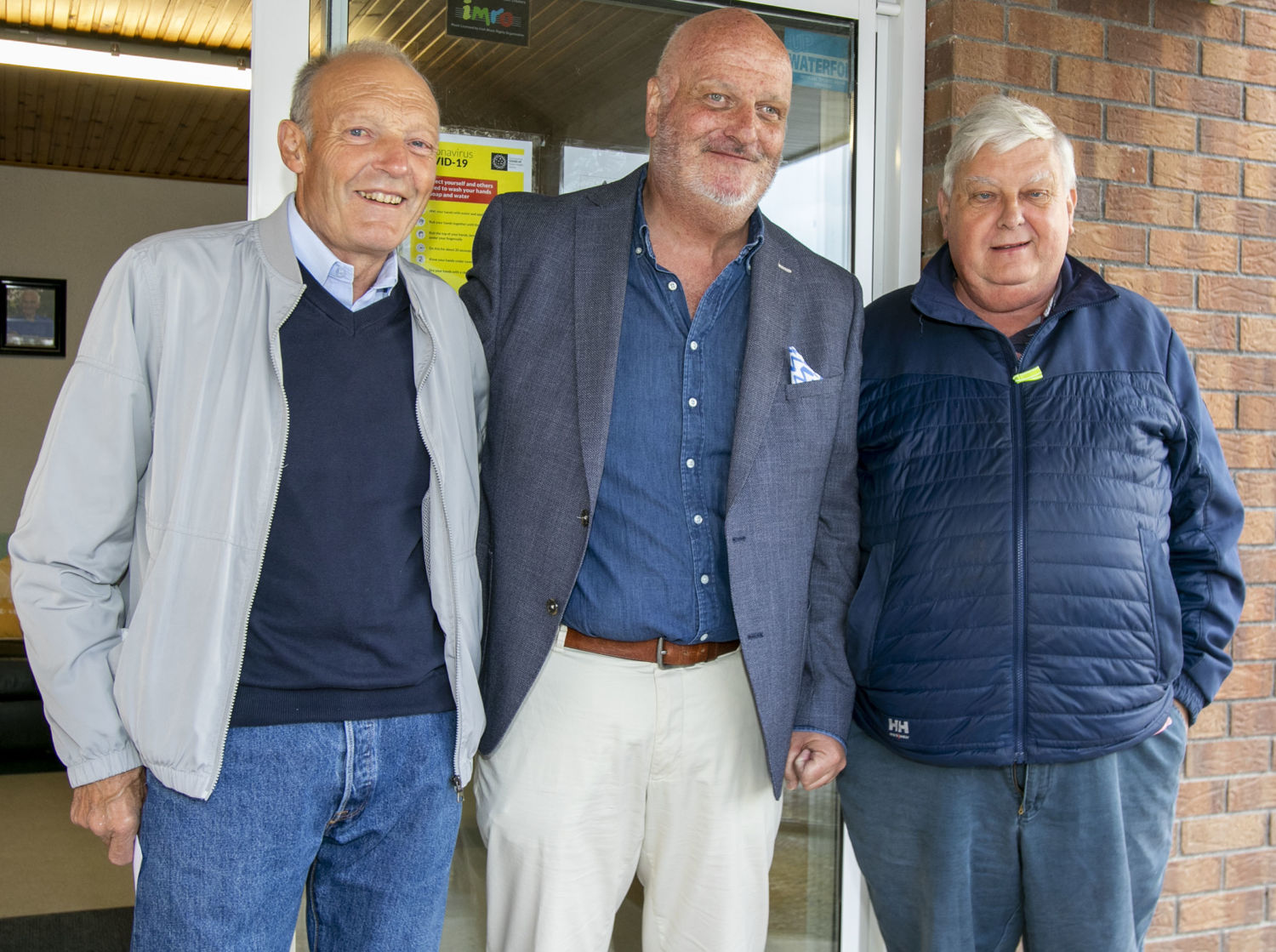 John Drohan, Padraic Dolan and Donal Lehane at the launch of A History of Dunhill GAA. 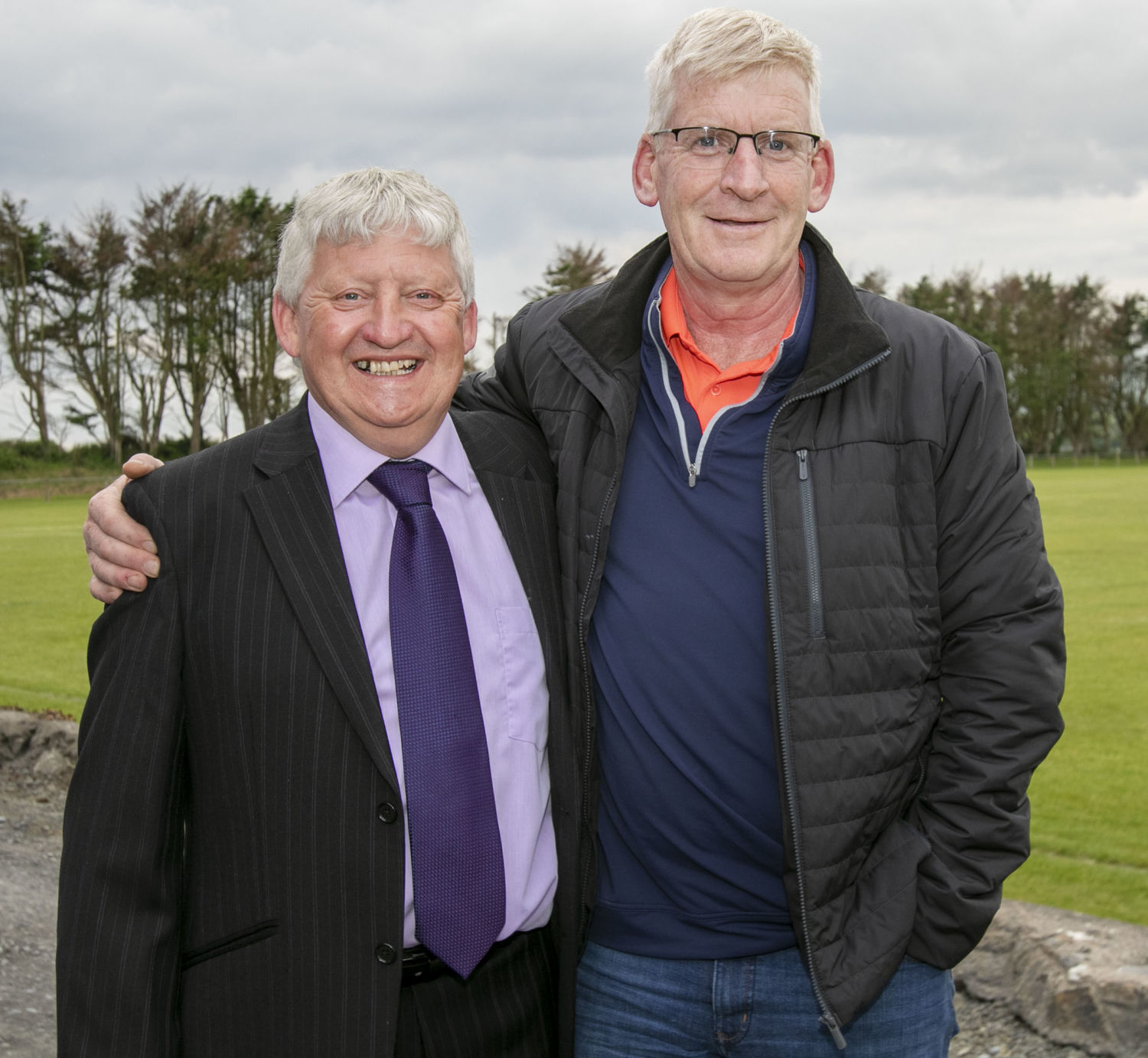 Michael Veale and Don McMahon at the launch of A History of Dunhill GAA.