The Waterford team that beat the DDSL this evening in Limerick to reach tomorrow’s Kennedy Cup Final.Kennedy Cup Semi-Final 2022

For only the second-time in Kennedy Cup history, the Waterford Schoolboy League have defeated hot tournament favourites the Dublin District Schoolboy League to book a place in Friday’s final where they’ll face Munster rivals Cork.
Waterford Crystal player and team captain Gavin Mitchell was the hero for the Blues as his magnificent free-kick ensured a famed victory for Paul Cleary’s side, who had keeper Henry Kirby to thank for a brilliant save to deny a late equaliser.
After having a goal ruled out for a foul with only two minutes played, Waterford took the lead with a stunning goal two minutes later. Luke McCarthy was fouled 25-yards from goal by Dublin defender Rhys Cullen, and captain Gavin Mitchell arrowed an unstoppable right-footed free-kick to the top left-hand corner of the net.
There was a big chance for Waterford to double their lead on 17 minutes when goalscorer Mitchell cracked in an effort from the right-side that fell to Muhammad Oladiti, but DDSL keeper Hayden Cummins made a great save with his feet.
The second-half was delayed for a lengthy period after a DDSL player received treatment for a medical emergency before he was transferred from the pitch by ambulance, and after a spell of uncertainty to whether the game would continue, it did.
With both sides cancelling each other out in terms of possession, chances were certainly at a premium with Waterford having a rare glimpse on 49 minutes, but Gavin Mitchell’s free-kick was caught underneath the bar by DDSL keeper Hayden Cummins.
As the game entered the final minute, Henry Kirby produced a stunning save when he brilliantly turned a cracking effort from Jan Biero around the posts when the ball looked destined for the far corner.
The final whistle from Cork referee Craig Noonan brought great celebrations from the Waterford faithful as the dream of landing a fourth title will come down to one final game – Waterford v Cork on Friday at 3.30pm. 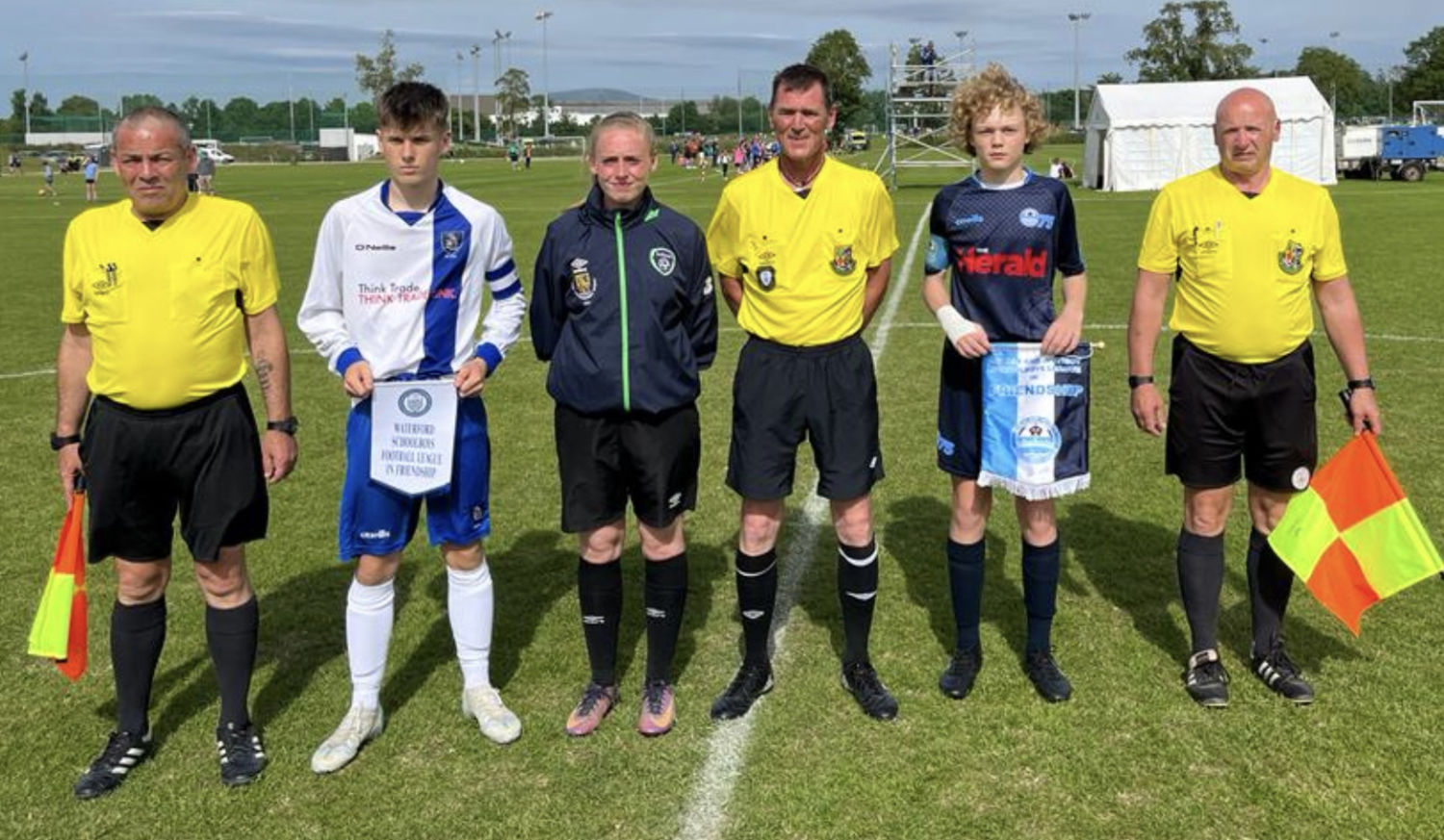 Waterford captain Gavin Mitchell the match winner with the DDSL captain and officials before the game.