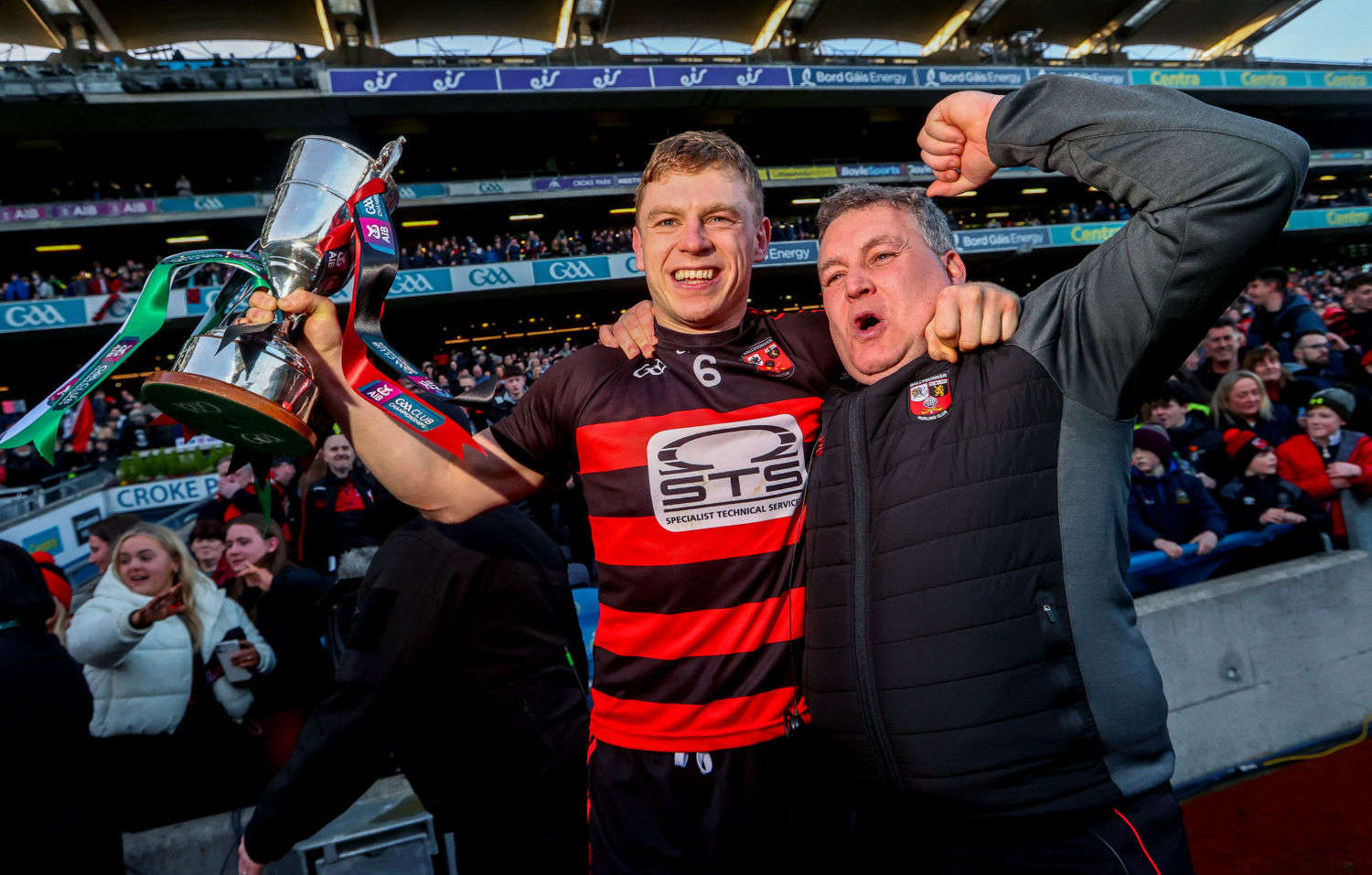 Darragh O’Sullivan (pictured here with Philip Mahony after Ballygunner won the All-Ireland Club in Croke Park in February) is back in charge of the Gunners for 2022. Photo: Inpho.

Darragh O’Sullivan will stay on as manager of All-Ireland champions Ballygunner for 2022 as the men in red and black go in search of nine county titles in a row this summer. It will be his fourth season at the helm.
The Gunners became the first Waterford club to lift the Tommy Moore trophy with that late, late win over Shamrocks Ballyhale back in February at Croke Park.
The 2022 championship will start on the last weekend of July. O’Sullivan’s side begin their defence of the News & Star Cup against neighbours Passage. The county final is pencilled in for September 11.
Ballygunner are only one title away from matching the record jointly held by Erins Own and Mount Sion. They are 43 games unbeaten in Waterford. Their last championship defeat was against De La Salle on June 23, 2015. Former Offaly hurler David Franks will remain as coach.

WHAT OF THE REST?
Peter Queally is back in charge of 2021 runners-up Roanmore for the third year in a row. The former Déise hurler guided the Sky Blues to their first county final in 31 years last October. He will also act as coach to Cork side Sarsfields.
Ian Flynn will lead De La Salle into this year’s championship. He captained the Gracedieu outfit to county and Munster glory in 2010. Former Waterford camogie boss Donal O’Rourke from Cappoquin will assist him as coach. He trained the Galway camogie team to All-Ireland success last year. Brian Phelan and Allen Dillon will serve as selectors. Salle stayed in the senior ranks with a big win over Ballysaggart in the relegation play-off last October.
Another new manager on the local scene is Pat ‘Paco’ Curran who will take charge of the Abbeyside hurlers and the Ballinacourty footballers this season. He helped Stradbally to the Conway Cup in 2015. He has been part of the Gaultier backroom team in recent years. Michael Ryan also has dual commitments as he will steer the Fourmilewater hurlers and The Nire footballers again this year. Fourmile lost to Ballygunner in the quarter-finals in 2021.
Dunhill are back in the senior ranks after a ten year wait. Tom Casey will wear the bainisteoir bib with Paddy Mullally from Glenmore as coach. Casey won two senior titles with Dunhill in 1978 and 1979 and lined out in two Munster finals for Waterford in 1982 and 1983.
John Meaney will manage Mount Sion for the fifth year in a row. Ger Cunningham, Darren Ryan and Jim Greene will also be part of the set-up. The Monastery men have lost three semi-finals in a row to Ballygunner, Passage, and De La Salle. 2006 was the last time they lifted the News & Star Cup.
Former Wexford hurler Paul Carley has signed up for a second season with Passage. The 2013 champions lost to Mount Sion in last year’s quarter-finals. Darragh Duggan will continue as Clonea boss. Coach Gary Morahan will assist the former Waterford minor manager with Anthony Power and Frannie Halpin in as selectors.
Dave Barry will walk the line again with Lismore alongside Robbie O’Sullivan and Fintan O’Connor. Lismore lost a thrilling county quarter-final to Roanmore last time out. In neighbouring Tallow, former Cork boss Denis Walsh has been reappointed.
Midleton man Peter Smith is still Dungarvan bainisteoir. The Blues beat De La Salle, Mount Sion and Abbeyside last year before they went out to Roanmore in the semi-finals.