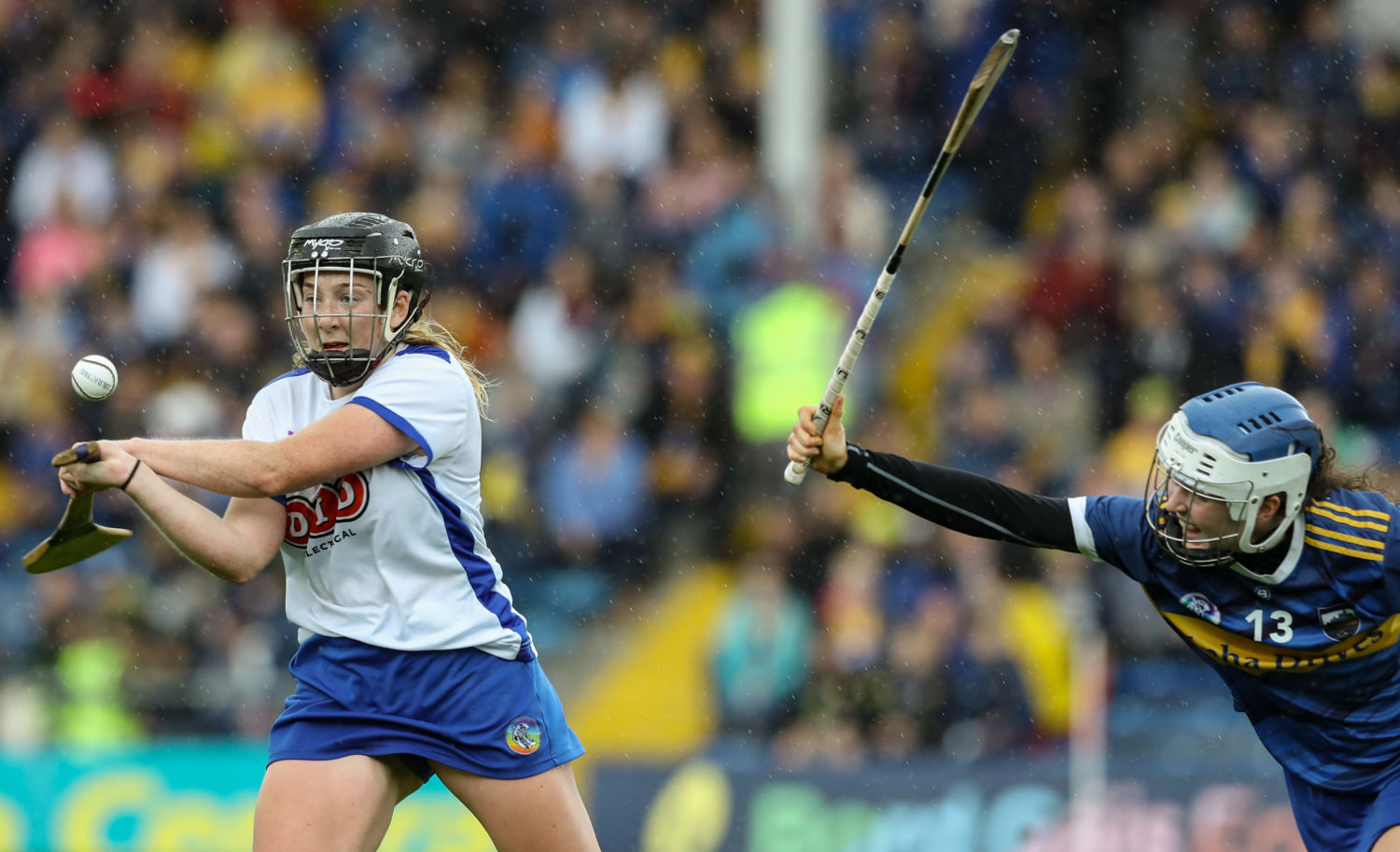 Player of the Match, Clara Griffin under pressure from Tipperary’s Claire Hogan during their Glen Dimplex All-Ireland Senior Camogie Championship Round 3 game in FBD Semple Stadium last day out. Next up for the Déise is Cork this Saturday. Photo: Inpho/Lorraine O’Sullivan.

One more win would send Waterford into the knockout stages of the All-Ireland camogie championship for the fifth year in a row.
After toppling Tipperary last time out, another traditional powerhouse of the game will visit Walsh Park on Saturday evening. Waterford have lost ten matches to Cork across league and championship since they earned promotion in 2015. Only four points separated the teams two months ago when they met in the Munster championship at Páirc Uí Rinn.
This is a top of the table clash. An opening round defeat to Dublin left Derek Lyons’ side under pressure to qualify in the top three but they got back on track with wins over Wexford and Tipperary. They lie in second place with two games remaining. Three points at home to Cork or away to Clare will put the Déise through to the latter stages.

ALL STARS SHOW THEIR CLASS
Waterford’s three All Stars have led the revival. Captain Lorraine Bray has been their leading light at midfield with 2-7 from play in three championship outings. Beth Carton has accounted for 22 points. She was unerring on placed balls last time out after missing an early 45. Niamh Rockett was a constant threat against Tipperary and shot six points from play against Wexford. These three have racked up 2-38 of Waterford’s 4-46 so far.
Róisín Kirwan has been a revelation in the full forward line. The St Annes’ target woman got two points and two assists in the first half against Tipperary and made an immediate impact as a sub against Dublin. Kirwan and Rockett operate as Waterford’s front two. Another attacking weapon Abby Flynn is realising her underage potential. She struck the crucial goal in Semple Stadium and notched three points against Dublin.
The Déise are hard to break down as they defend in numbers. Clodagh Carroll gives the full back line extra protection as sweeper. They have only conceded one goal in three games and that was penalty from Dublin’s Aisling Maher. Goal getters Amy O’Connor and Katrina Mackey will test that defensive solidity on Saturday. O’Connor has netted four times in the 2022 championship.

CORK A TOUGH NUT TO CRACK
2021 All Star Hannah Looney is back on the Cork panel after a spell in New York. They have beaten Wexford, Clare and Dublin already in Group 1. Another victory would send them through to the All-Ireland semi-finals as group winners.
Matthew Twomey’s team are serious O’Duffy Cup contenders. They lost the league decider to Galway in Croke Park before they defeated Clare in the Munster final after extra time. Davy Fitzgerald will be back on the Walsh Park sideline as he is serving as Cork coach this year.
Despite Waterford’s upturn in form, the ladies in red should make it four wins from four.