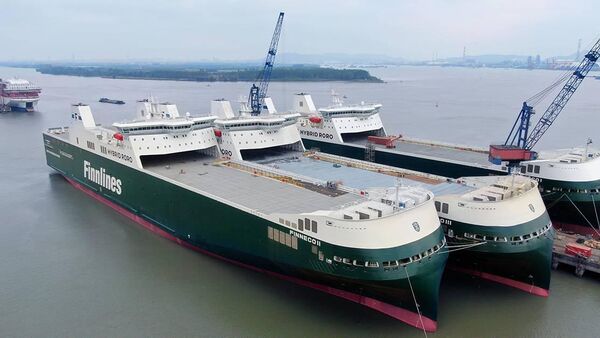 MANAGEMENT at Rosslare Europort has confirmed that a new freight route between Rosslare and Zeebrugge, Belgium is set to be established next month as Finnlines launches a twice weekly service between the two ports.

The new service not only provides a new direct link between Ireland and Continental Europe, but through Zeebrugge – one of Europe’s busiest RoRo ports – it will also open up further European and global routes for Irish industry.

The route, which commences on July 23, will be operated by the ro-ro vessel, Finnpulp, which has the capacity to carry 3,259 lane metres of cargo, equivalent to around 225 trailers. There will be two departures per week from each direction, and it’s hoped to expand the service further.

Said Rosslare Europort General Manager Glenn Carr: “The growth of Rosslare Europort’s direct connections to and from the European continent continues apace. Having established ourselves as Ireland’s leading port for direct European RoRo services in 2021, the announcement by Finnlines will bring to 34 the number of direct services between Rosslare and the continent next month.”

Mr Carr continued: “The substantial increase in volume at the port clearly demonstrates the shift in demand for services out of Rosslare from other hubs, we are the closest port to Europe and easily accessible to all major cities and industrial sites throughout Ireland. As major ports such as Dublin grapple with future constraints and congestion, Rosslare Europort will be further developed to help alleviate these challenges and offer real viable, efficient and sustainable alternative services and connectivity for the greater good of the wider economy.”

Said Finnlines Line Manager Antonio Raimo: “We are delighted to support the growing post-Brexit Irish trade to the Continent and provide transport operators with an important alternative route, which will greatly benefit all stakeholders and the Irish economy. Finnlines provides cost-efficient and high frequency liner services to its customers with the lowest CO2 emissions per transported cargo unit.”