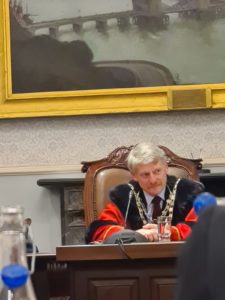 AT the AGM of the Metropolitan District of Waterford City and Council Council, Cllr. Seamus Ryan’s term came to an end. Receiving a standing ovation from all Councillors present, he was applauded for the dignity with which he held the office of Mayor through the past year.

The election was finalised in the second round, with the first round seeing the votes split three ways between Cllr. Donal Barry, Cllr. Jason Murphy, and Cllr. Jim Griffin.

In his acceptance speech, Jason acknowledged the enormous role his parents had in shaping his journey. Jason was elected first in 2014, and retained his seat in 2019.

He said this evening marked a ‘great show of democracy,’ and he thanked those who contested the role because they have contributed to a fair and just election in local government.
His pledge for the year ahead is to work with all parties for the betterment of Waterford city.