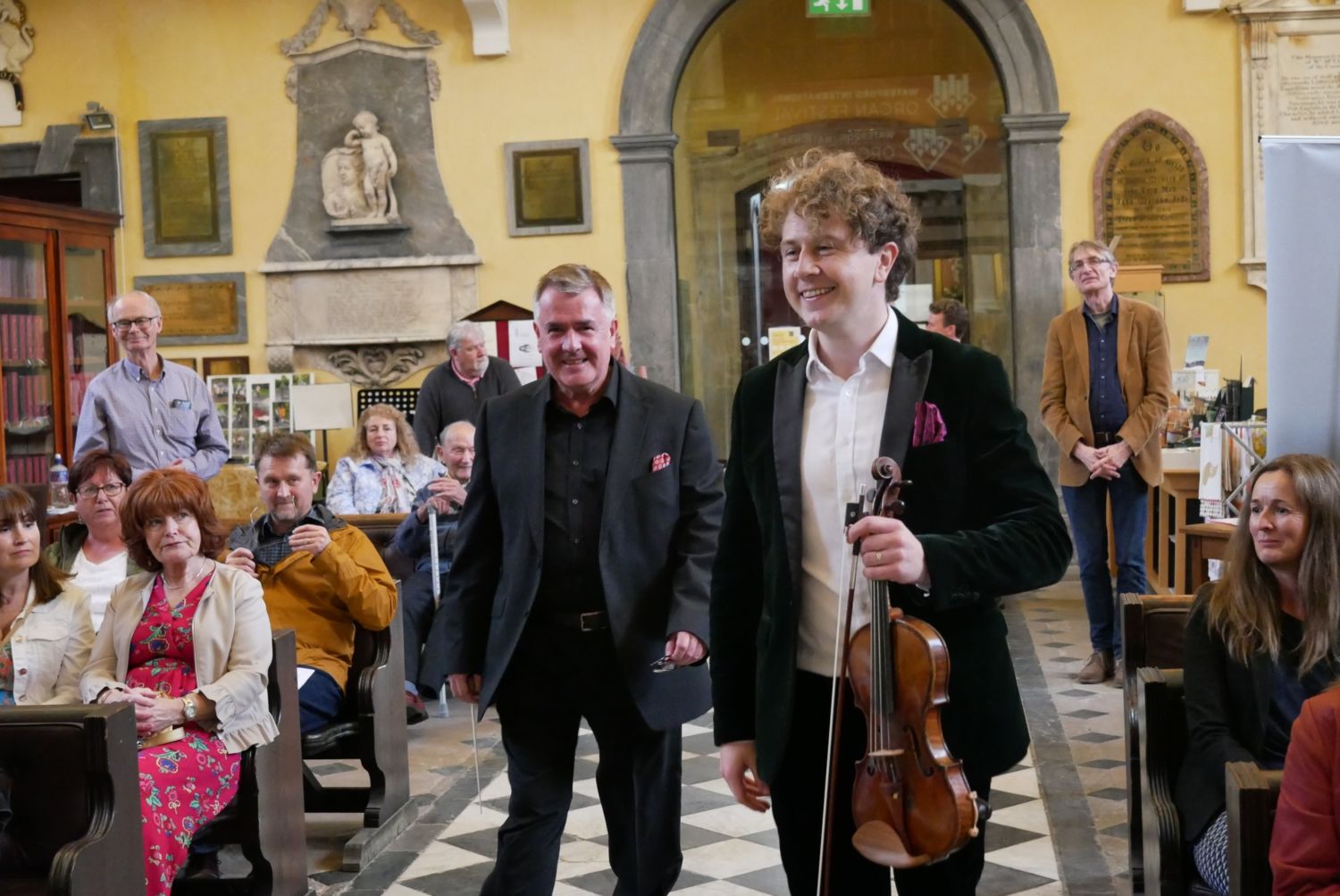 Other events include a workshop introducing children (and maybe interested adults too!) to the organ and featured excerpts from Saint-Saëns Carnival of Animals.

The festival highlight is the return of The Hibernian Orchestra to Christ Church as part of the second Waterford International Organ Festival. The Saturday evening concert “All stops out” is led by the Hibernian Orchestra with conductor John Finucane, Patrick Rafter (violin) and Simon Harden (organ), and includes Saint-Saëns’ much-loved “Organ Symphony”.

There’s a dynamic to tonight’s concert that is simply breathtaking. The opening prelude from Die Meistersinger von Nürnberg is typically Wagner – big, busy, brassy and breathless with the strings working at a rate of knots, while the reeds glide along between the main movements. The opening themes are broad and expansive before a moment of gentle lyricism for master-singer Walthar’s prize song. The overture ends with a rabble-rousing wall of music as the apprentice master-singers get going. It’s hard to believe that Wagner composed this Prelude during a train trip in March 1862 before he actually began work on the rest of his opera.

Patrick Rafter – beaming smiles and oozing confidence before losing himself in the performance moment – is soloist extraordinaire for Tchaikovsky Sérénade mélancolique. Written in 1875, it was the composer’s first work for violin and orchestra, and Rafter’s magnificent playing does the serenade justice. Sérénade mélancolique is alive with expression and character, and is a real showpiece for the violin. Unlike the usual bravura of a violin concerto, the violin carries the sadness of the main melody. The atmosphere is overwhelmingly dark, although Tchaikovsky’s signature rich orchestrations shine through in the livelier middle section of the Serenade before the piece slows down and almost fades away with Rafter’s Alpine notes that are surely a gift from the Gods.

Three pieces from the orchestra’s “Schindler’s List” with soloist Patrick Rafter bring tears in the old cathedral as the poignancy of the piece hits home. The score of the drama, set in the middle of a barbaric conflict, allows for quite a divergence of composition. The rich ethnicity of Jewish life is captured perfectly in a lament for what might have been in the stillness of “Jewish Town”. The sweeping melody of “Remembrances” seems to capture the lost soul of a generation of Jewish victims in a cri de coeur against the inhumanity of what has happened. Rafter’s playing of the main theme is a haunting and moving showstopper that brings sustained applause for Patrick’s playing.

The Saint-Saëns Organ symphony is a blast. Saint-Saëns said, “I gave everything to it I was able to give. What I have here accomplished, I will never achieve again.” The composer seemed to know it would be his last attempt at the symphonic form, and he wrote the work as a “history” of his own career: virtuoso piano passages, brilliant orchestral writing characteristic of the Romantic period and the sound of a pipe organ suitable for a cathedral or the largest of concert halls. The symphony was commissioned by the Royal Philharmonic Society in England, and the first performance was given in London on May 19, 1886, at St James’s Hall, conducted by the composer. After the death of his friend Franz Liszt on July 31, 1886, Saint-Saëns dedicated the work to Liszt’s memory.

One of its most outstanding and original features is Saint-Saëns’ ingenious use of keyboard instruments – piano, scored for both two and four hands at various places, and the pipe organ – Saint-Saëns was already a legend as the organist at La Madelaine Cathedral in Paris.

There’s an energy and a buzz about this symphony that makes us sit up in our seats. The constant repetition of the four-note theme, that seems to act as a motto throughout, is repeated constantly in various guises around the four sections of the band. The strings sometimes manage to take a breather, although the constant counting of the tacet players really brings home the difficulty of the symphony. Everything happens here at a rate of knots as Saint-Saens throws everything into the mix – including the kitchen sink. When organist Simon Harden – who appears on a rear screen above the altar – pulls out all the stops on the organ, you just know that you’re in for a rollercoaster finale. Huge organ chords, blasting brass and reeds, electrifying attack from the strings, clashing cymbals and a timpanist exploding ba-ba-booms like the Roman drummer on the slave galley in Ben Hur all made for the most magnificent of finales.