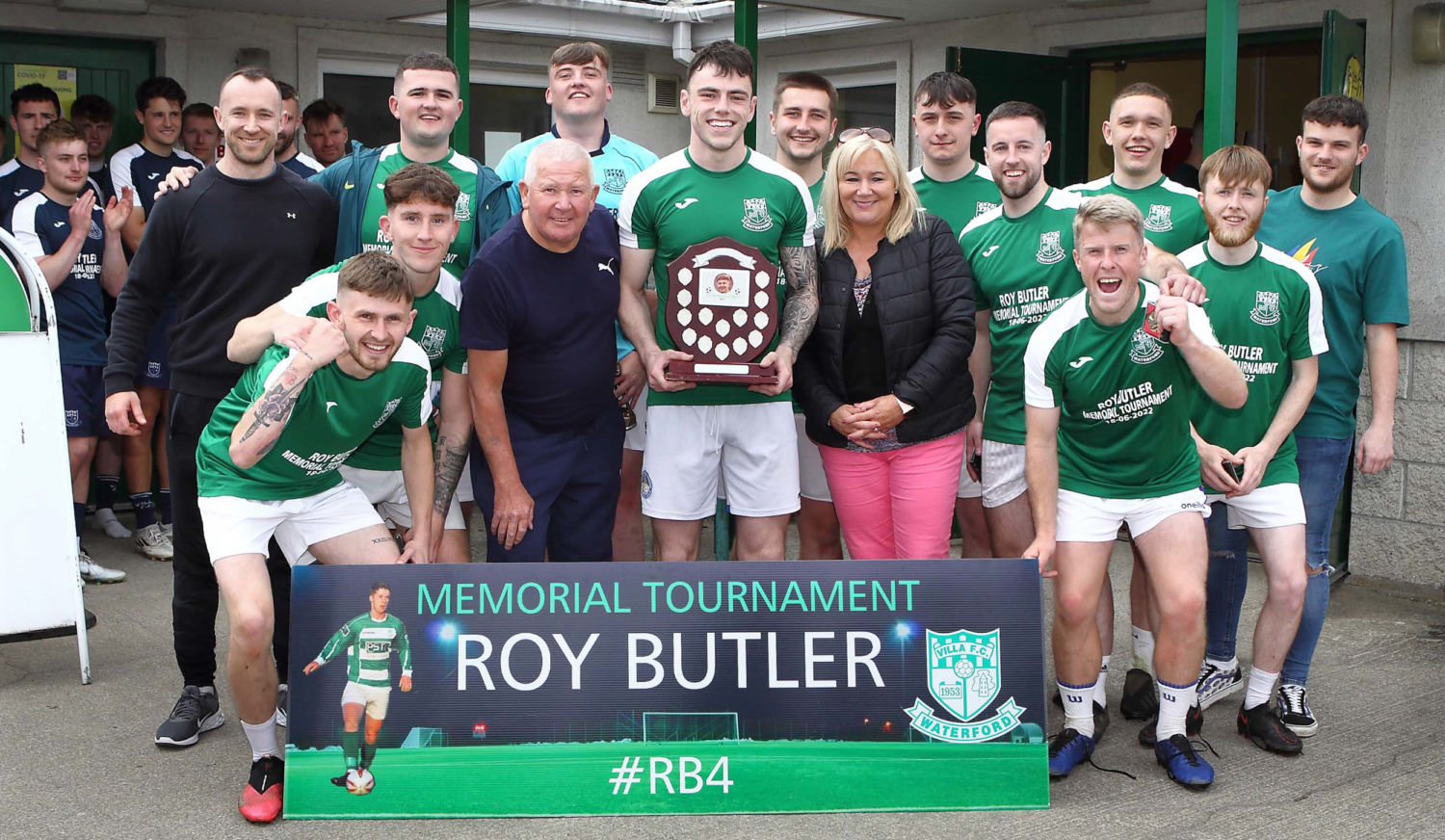 Martin, Angela and Aaron Butler are pictured with the winning Get Your Jeans On FC team and captain Darragh Corcoran after they won the inaugural Roy Butler Memorial Tournament on Saturday at Connors Park. Photos: Noel Browne.

It was an emotional day at both Connors Park and Ozier Park on Saturday as the family and friends of Roy Butler came together to remember the former Villa and Waterford player for a very competitive seven-a-side tournament.
The tournament, which was the idea of Roy’s good friend Kieran Doheny, was organised in conjunction with the Villa club, and after a day of great entertainment and drama, it was Get Your Jeans On FC, captained by Darragh Corcoran that came out victorious.
16 teams set out in battle early on Saturday morning and by the time final referee Derek O’Brien blew the full-time whistle in the decider, it was the brilliance of keeper Darragh Sheridan in the final that was all the rage after a brilliant day.
With the support of the Waterford Junior League committee and the registered referees across the Schoolboy and Junior platforms, it was a day to remember as the footballing community came together to remember a much loved young lad.
The early battles in the group stages was there for all to see across the eight pitches, and when it came down to the quarter-finals, it was still hard to predict the winners with Loophole FC, Columbia, Get Your Jeans On FC and Farmleigh reaching the final four.
A late Danny Ahearne goal saw Loophole FC secure a win over Farmleigh, while a Darragh Corcoran brace secured a win for Get Your Jeans On FC with the latter getting the better of his brother captained Columbia. 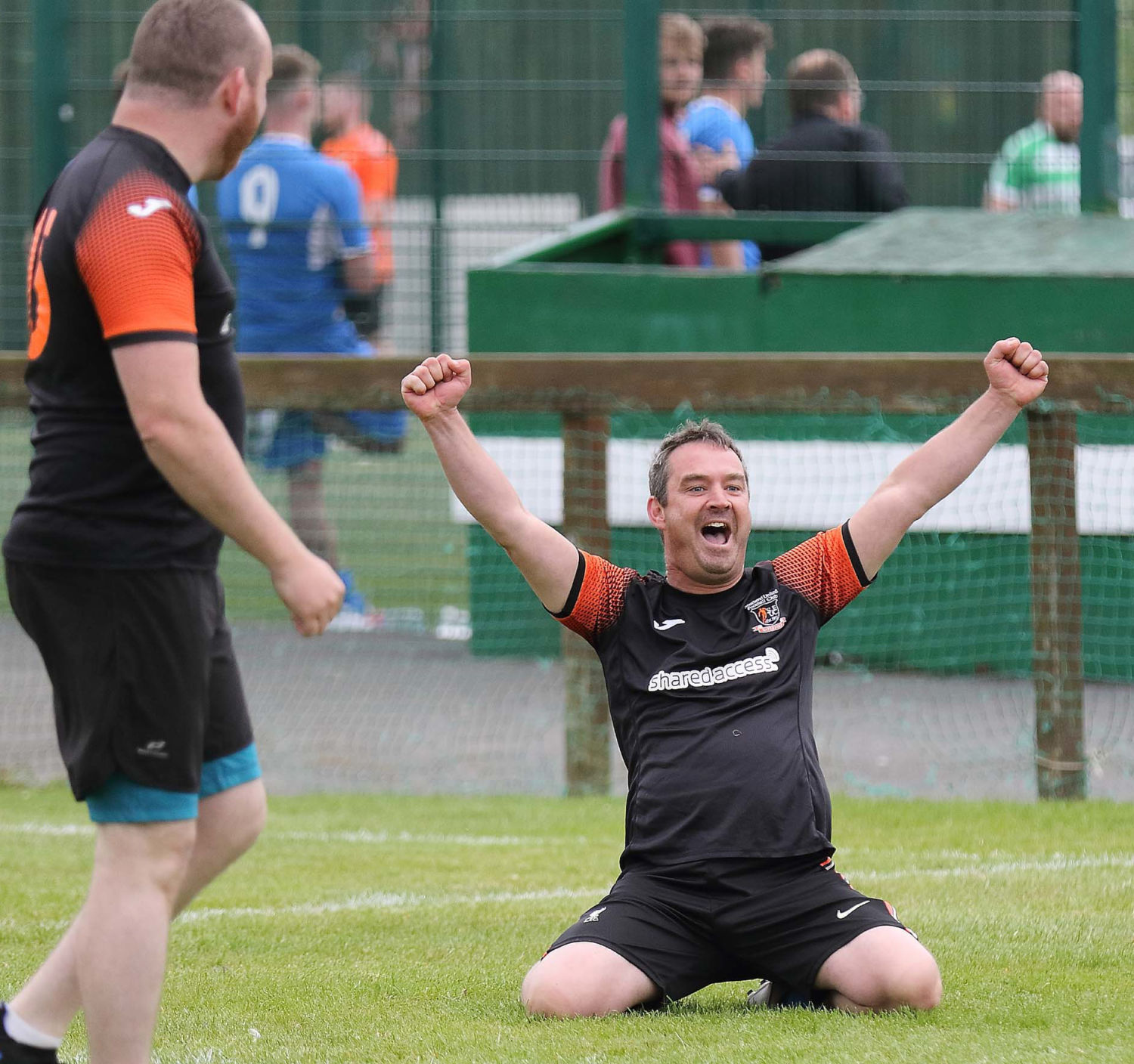 The goal celebration of the tournament should definitely go to Jack Walsh from the Bausch + Lomb team.

A GREAT DAY
The final was a great occasion as many of Roy’s friends played on both teams but particularly the winning side Get Your Jeans On FC, who came out on top 3-2 with two goals from a Shane Wyse and a strike from Mickey Merrigan. Aaron O’Connor and David Hobbs netted for Loophole FC.
After the game, Roy’s mother Angela presented the player of the final to Darragh Sheridan, his brother presented the runners-up medals to Loophole FC captained by Aaron O’Connor, with Roy’s father Martin presenting the winning trophy to captain Darragh Corcoran.
A day to remember, which was down to the hard-work of the organising committee including Kieran Doheny, Derek Doheny, Gary Fitzgerald, and yours truly. Thanks to Tom Murphy and Declan Purcell for marking out the pitches. The tournament sponsors Viewmount Financial Services and the Blues Supporters Club. The players, referees and supporters, who made this tournament the success that it was. 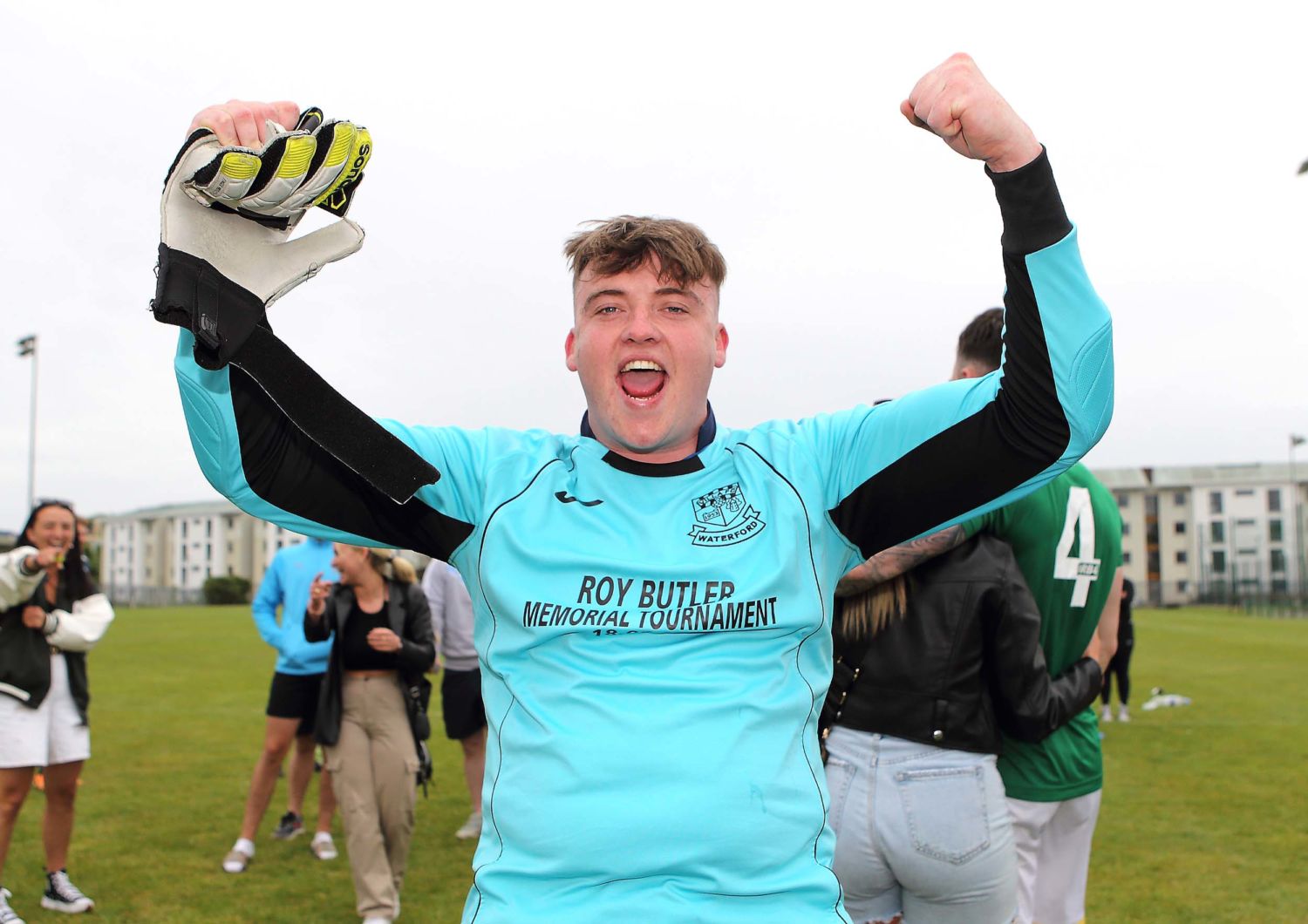 Man of the Match, Darragh Sheridan celebrates at full-time. 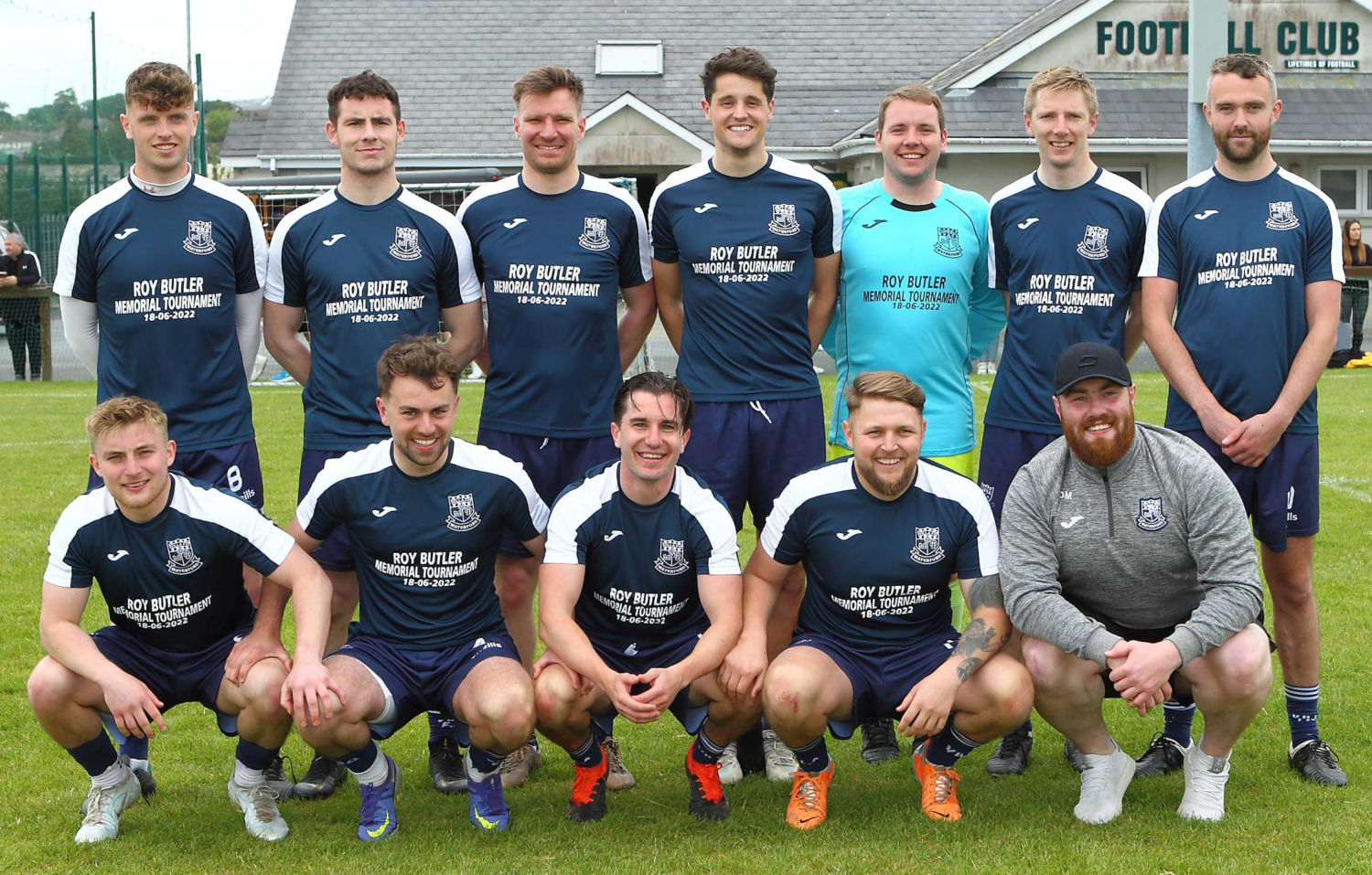 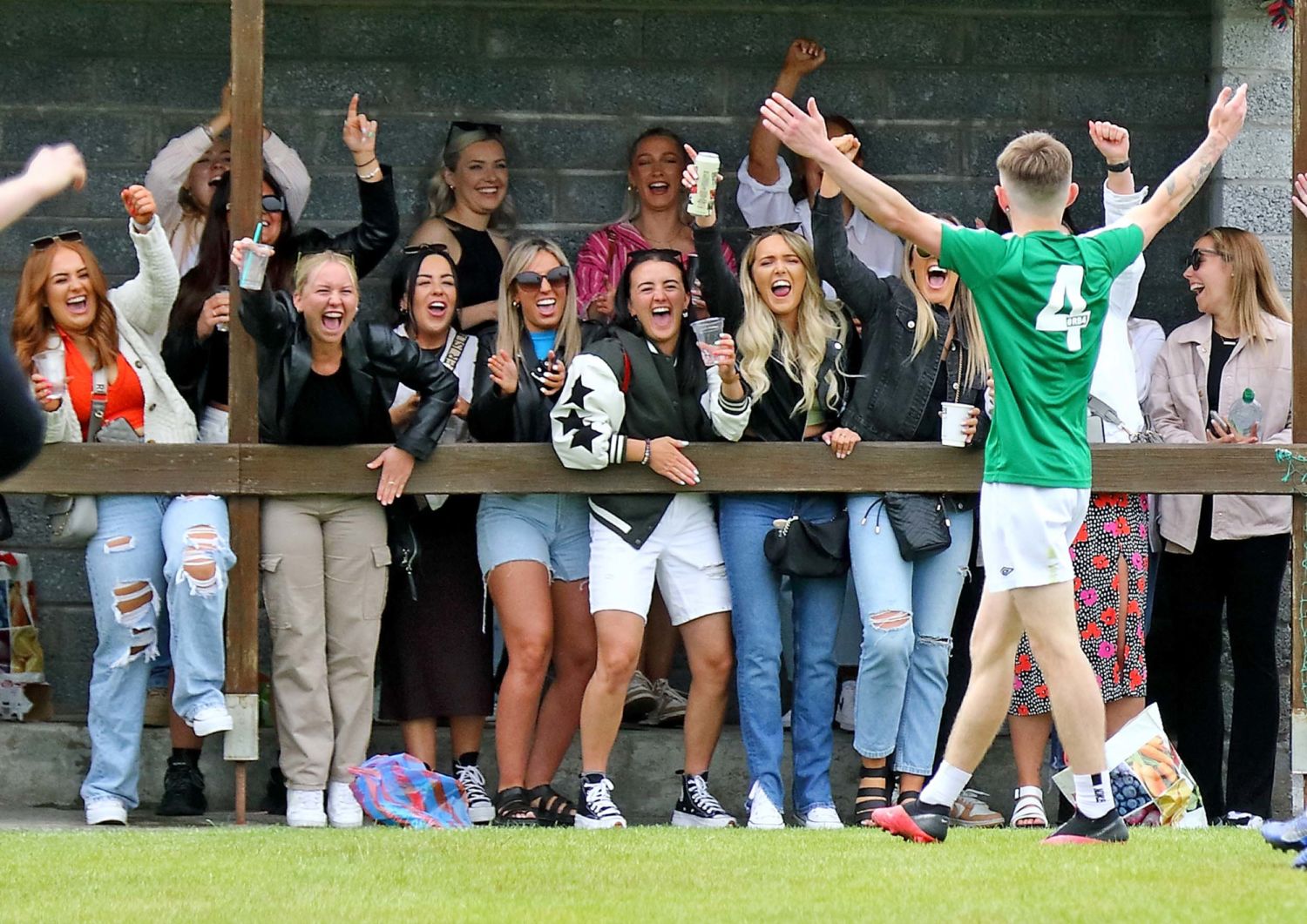 Get Your Jeans On FC’s goal scorer Shane Wyse celebrates in front of his adoring fans in Connors Park.