View from the Green Room: A seasonal return for Vladimir 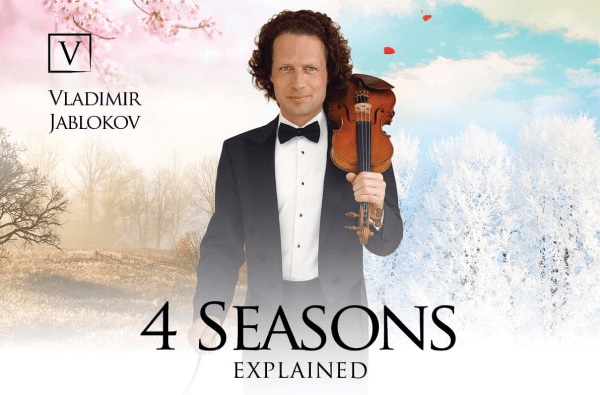 VLADIMIR Jablokov is everyone’s favourite classical musical violinist. He has an easy charm, a winning smile and eyes that twinkle with excitement when he takes the violin in his hands. Chatting to his audience comes easily and he welcomes audience feedback.

You get the feeling that he believes that anyone could play the Vivaldi megahit – as long as they had 15 years of practice and the talent and confidence to go with it. He’s learned the whole concerto by heart during Covid – although, somehow or other, I can’t imagine turning the pages would make it any easier.

He’s on a mission to, not only dazzle with his performance, but also to explain the backstory to the concerto. Vladimir has got rear screen projections of the differing and changing seasons that gives a visual interpretation to his explanations of just what’s going on throughout each section. It’s all pretty basic and lacks imagination but it conveys a visual impression of pretty much what’s going on in the Seasons.

‘Although we’re a couple of fiddle-players and a harpsichordist short, Vladimir certainly fits the bill as a virtuoso.’

There are four concertos – “Le Quattro Stagioni— to be accurate; each of which gives musical expression to a season of the year. These were composed around 1718−1720, when Antonio Vivaldi was the court chapel master in Mantua, and are probably in the Top 5 of recognisable classical pieces.

The composition was musically revolutionary when first presented. This was instrumental music intended to evoke something extra-musical and a musical form which Vivaldi was determined to prove sophisticated enough to be taken seriously.

Vivaldi also published a sonnet for each season that worked as a guide to create the spirit of the three months that his composition evoked. It’s one of the earliest and, without doubt, the most detailed example of what was to become programme music – music with a strong storyline. The composer went to great lengths to balance his music with the text of his accompanying sonnets.

His play is dazzling and the audience regularly breaks into applause for the player who seems to know exactly what his audience wants.

Vivaldi provides so many stand-out moments: the barking dog on viola and the pastoral bagpipe dance in Spring and the rapid song of the cuckoo and the storm finally breaks with all the fury Vivaldi could muster in Summer.

This was followed by the amazingly detailed narrative of an Autumn hunt with horse hooves, baying dogs, rattling gunfire, and the soloist as the fleeing stag, who dies just before the final ritornellos, the metronome on piano depicting slow time and the harsh dissonances of chattering teeth that captures the bitter cold of Winter.

The second half of the concert features a sting of all-time favourites: Bach’s Air on the G string, the ‘Schindler’s List’ theme by John Williams, a Piazzolla Tango, Lara’s Theme from ‘Dr Zhivago’, the Merry Widow Waltz, a Fiddler on the Roof medley, and Offenbach’s Can Can. The Radetzky March had the audience on its feet and clapping along.

Vladimir’s trio includes Katie O’Connor on violin, Sokol Koka on cello, Inna Firsova on piano make an excellent trio that clearly enjoy playing. However, I did miss the harpsichord in the Winter concerto of the Four Seasons.

Vladimir has got a large fanbase here in Waterford and should return to the Theatre Royal as often as he once did.