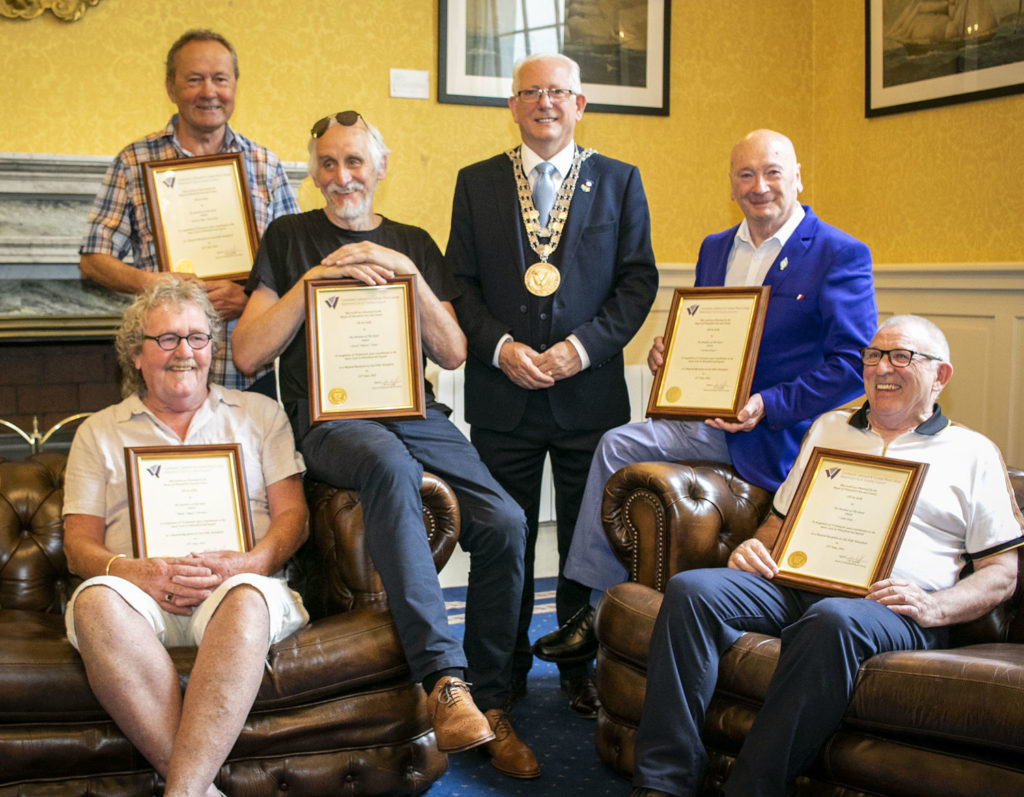 ON June 22 last, one of Waterford’s most popular and prolific bands, Simon were honoured with a Mayoral Reception for their “50 fantastic years’ contribution to the music scene in Waterford and beyond”. Cllr Joe Kelly, Mayor of Waterford City and County at the time of the reception, said that he was delighted to honour the band on the occasion of their 50th anniversary.

“I have fond memories of going to the Showboat and to Joe O’Shea’s to hear them play,” Cllr Kelly said. “These were fabulous nights, with the place rocking to fantastic music. Simon is one of, if not the best group ever to come out of Waterford. There has never been a group like them. I’m sure everyone in Waterford is very proud of Simon and thankful for the enjoyment they gave us all.” 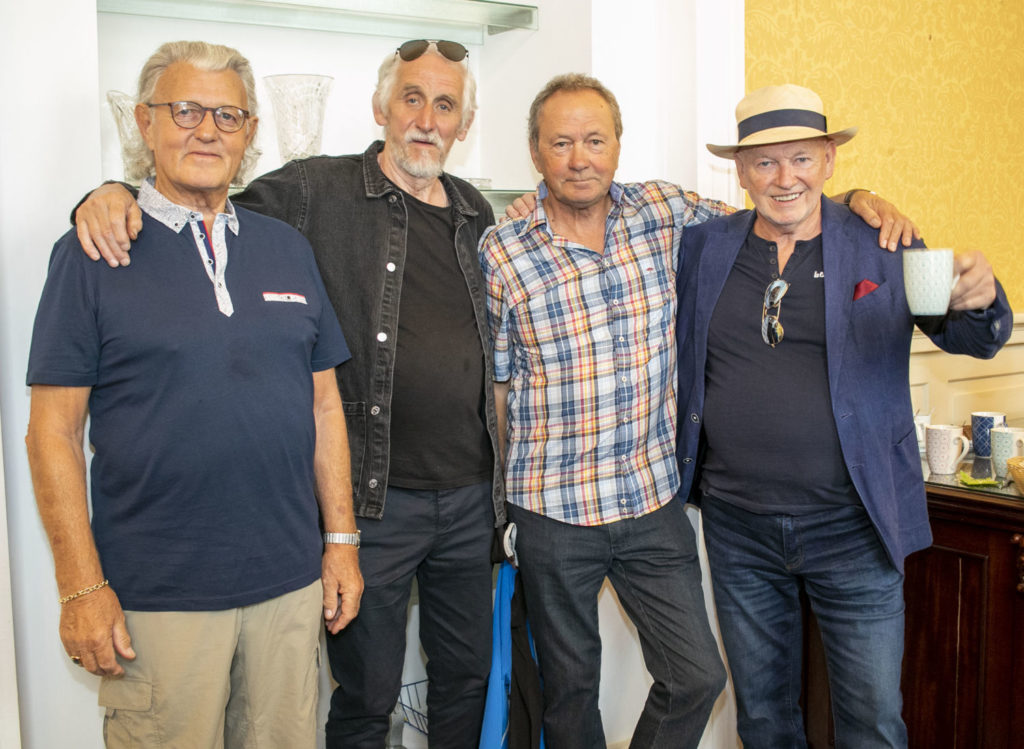 The popularity of Simon was undoubtedly down to their mix of musical styles. Owen McKelvey and Dermot Power came from a ballad/ traditional music background, while lead guitarist, Mac McCarthy and bass guitarist, Johnny Daly, came from a rock background, and drummer, Skippy Sheridan, was influenced by both styles.

Owen McKelvey and Dermot Power had belonged to a very popular folk band named Simon’s Protégé, the name coming from their love of the music of Paul Simon. The band had won the Youth Ballads section of the Kilkenny Beer Festival on two occasions, as well as winning the best original song section.

In 1973 a newly opened bar on the Tramore Road called Katie Reilly’s were stuck for a band and the manager Ronnie Reynolds contacted Dermot and asked if Simon’s Protégé could play.

“We very quickly realised that we’d need a bigger sound for the newly blossoming cabaret scene, so we decided to get a drummer,” Dermot told the Waterford News & Star. “We were told that there was a young drummer who might be available called Philip ‘Skippy’ Sheridan. I went to his home on the Cork Road, where I was ushered into the front room by his mother and confronted with a young fellow sitting behind a kit of drums with a motor cycle helmet on to block out the noise of the drums.”

At this time, Skippy was playing with Tony (Froggy) Walsh but, unable to turn down the opportunity, immediately agreed to join.

“Our first gig with Skippy was in Trayer’s Lounge in Barrack Street (the present Gerry’s Bar),” Dermot said. “Sometime later, we decided to get a bass player and Skippy suggested that we get Johnny Daly. Johnny had been the bass player with a young and very promising Waterford band named “The Future”, who had recently broken up. At this stage, Frankie McEvoy decided to leave the band, as he believed we were straying too far from our folk roots.”

The band was an immediate hit with the public, gaining a reputation for that unusual mix of musical styles. An inevitable bout of musical chairs followed with Johnny Daly temporarily leaving the band to play with the Maurice Mulcahy Orchestra. Some months later, Johnny re-joined the band and suggested to the rest that an “excellent lead guitarist” by the name of McCarthy should join too. A meeting was held in the Granville Hotel and the band became a five piece outfit called Simon. 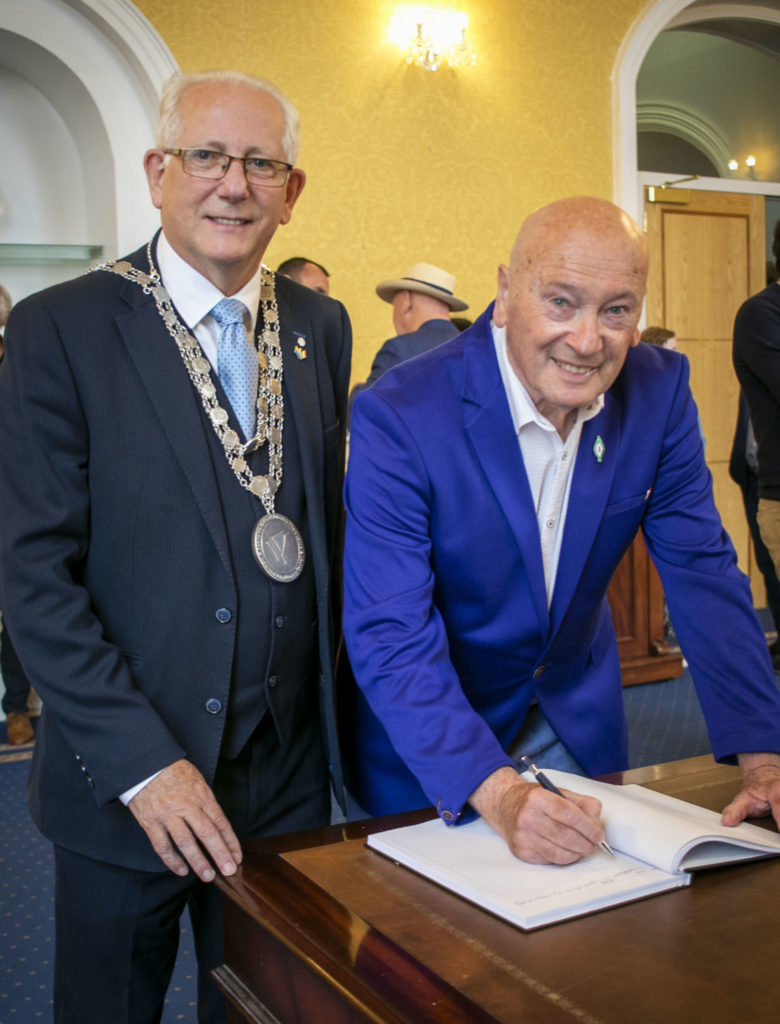 “Why that never came about is still a mystery,” Dermot said. “Around the same time we were asked to play in the Old Sheling in Dublin. After the gig, the manager was so impressed he asked if we would accept a regular Saturday night booking and was prepared to ditch one of the then top Irish acts to have us play a regular date there. We refused, as we had a regular Saturday night gig in Waterford at the time. I believe that decision above all others was the reason that Simon never hit the big time. If we had played that Dublin gig, which at that time was the premier venue in Ireland, we would have gotten the exposure necessary to hit the big time.”

In 1978 Simon were asked to compete in the Cabaret Section of the Rose of Tralee Competition. They came second but won the singing pubs section singing an unaccompanied English folk song.

“We should have won the cabaret section, but politics prevailed above talent,” Dermot said.

It wasn’t a complete loss though as the band became friends with Davy Arthur and the Furey Brothers during the competition.

“Finbarr wrote a Christmas song for us, which we called “Simon’s Christmas”,” Dermot said. “The story of the making of that record is a book in itself. We sold a few of those records and gave most of them away. I don’t even have one myself at this stage. The Mount Sion boy’s choir accompanied us on that record and a mini bus was hired for the day for the choir and they were brought to Dublin Zoo for a trip. It was a brilliant day out for all.”

“We were very proud to have our good friend, Mayor Joe Kelly give us a Mayoral Reception,” Dermot said. “It was complemented with a scroll celebrating the band’s achievements and longevity in the music business, of which we are all really grateful and really proud.”

Simon are managed today by Lenny Burns of Breakout Music and are still gigging to sell-out crowds, including recent shows at the Theatre Royal and the Churchyard Sessions.