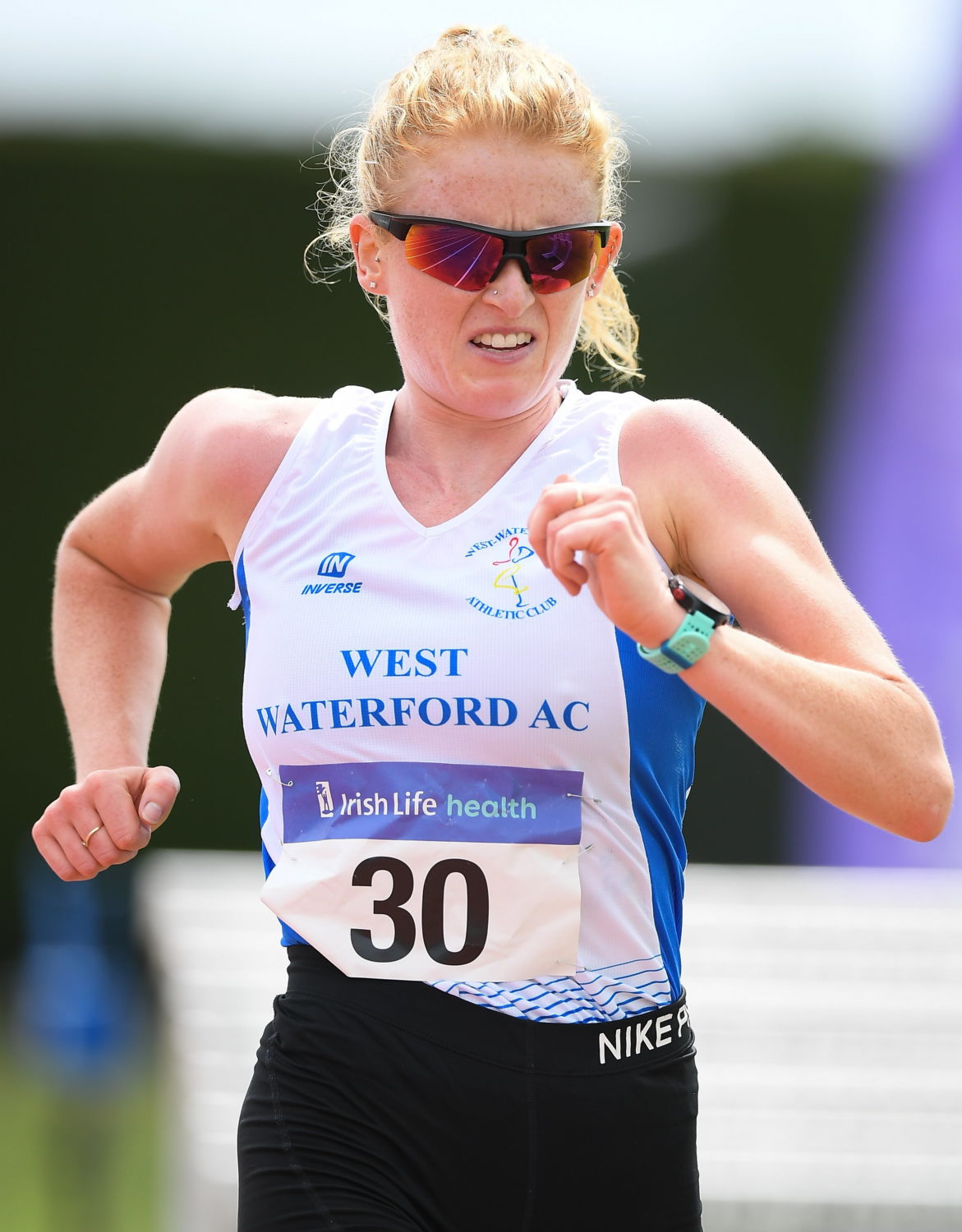 Kate Veale of West Waterford A.C. on her way to winning the Senior 3000m Walk during day one of the AAI Games and Combined Events Track and Field Championships at Tullamore, Offaly. Photo: George Tewkesbury/Sportsfile

In the All Ireland Combined Event Championships also in Tullamore  Anna De Courcey Waterford won the over 50 title with 2275 points with Shirley Fennelly Tramore  2nd with 1883, with Tom O’Brien, Waterford also won the over 55 title. with 3013 pts again a Championship best performance.

On Sunday, Eoin Kenny Waterford AC back after a long layoff due to a hamstring injury was 6th in the 400 metres in 49.08 and Taiwo Adereni also of Waterford was third in the All Ireland Junior Decathlon Championship.

There was a big personal best time for Lucy Holmes of West Waterford in the 800 metres at the British Milers Club Graded meeting  in Manchester last Saturday. She clocked 2 minutes 770 seconds well ahead of her previous best time in winning the C race.

135 competed in the Ballinameela 5Km Road Race on Friday last, July 22, and first home was Sergiu Ciobanu of Clonliffe Harriers in 15 minutes 10 seconds, 2nd was Pat Hennessy in 15.19  and third  Sean Curran in 16.08 both West Waterford.

First lady home was Fiona Santry of East Cork in 17.43, 2nd was Keely Tideswell Clonmel in 18.43 in and third was Claire Barrett DMP Wexford in 18.49.

On Sunday last, the Annual Pink Rock 10 km Road race promoted by St Joseph’s AC had an entry of 101.First home in 33 minutes 12 seconds was James Kelly Castlecomer, in second place was Scott James United Striders in 33.14 and Craig O’Brien Ferrybank with another good run was third in 33.18. First lady home was Adele Walsh of St Senan’s AC in 40.29, Clare Dermody Kilkenny City Harriers was second in 40.55 and Katie O’Brien Castlecomer was third in 41.15

At the 7KM mountain trail race on Sunday morning last in the Glens Of Aherlow, Joe Gough was in action in preparation for the World Mountain Running Championships to be held in The Comeraghs  on September 3. Joe was once again first in his age category over 65 on a  windy but dry morning for the event.

The Men’s 400 Metres hurdles final in Oregon last week was won by Alison Dos Santos, Brazil in 46.9 seconds a Championship Record, Rai Benjamin  was second in 46.89 a season’s best and Trevor Forrist was third in 47.39 a personal best both USA. World and Olympic Champion who had an injury this year was 7th in 48.42. With the European Championships coming up in mid-August in Munich it will give Thomas Barr an idea of the kind of times needed to progress.

Waterford AC men’s team compete in the second Round of the National Senior  League in Carlow IT next Sunday the fixture on the track begins at 11 am and in Field events at 10.30 am

The final race in the 14th Annual Outfield Sports Three Counties Challenge Series organised by Carrick on Suir Road Runners,  the Noel O’Donnell Electrical sponsored Piltown five-mile road race is on this Friday, July 29 in Piltown at 7.30 pm. The Race Headquarters is the Piltown GAA Complex where entries will be taken from 6pm until 7.15pm

Coming up on Friday, August 5, at 7.30 pm is the Rás Na Rinne in Ring Co Waterford  over 6 miles starting at the Barrack Cross heading downhill to An Coinigéar Strand. Participants then head out to the tip of the Coinigéar beach, running on the sand side and returning on the grass side, finishing back at the Barracks cross. Race numbers will be available for collection from Halla Pobail na Rinne between 6.15pm and 7.15pm on the evening of the race. AAI Permit is in place for event. 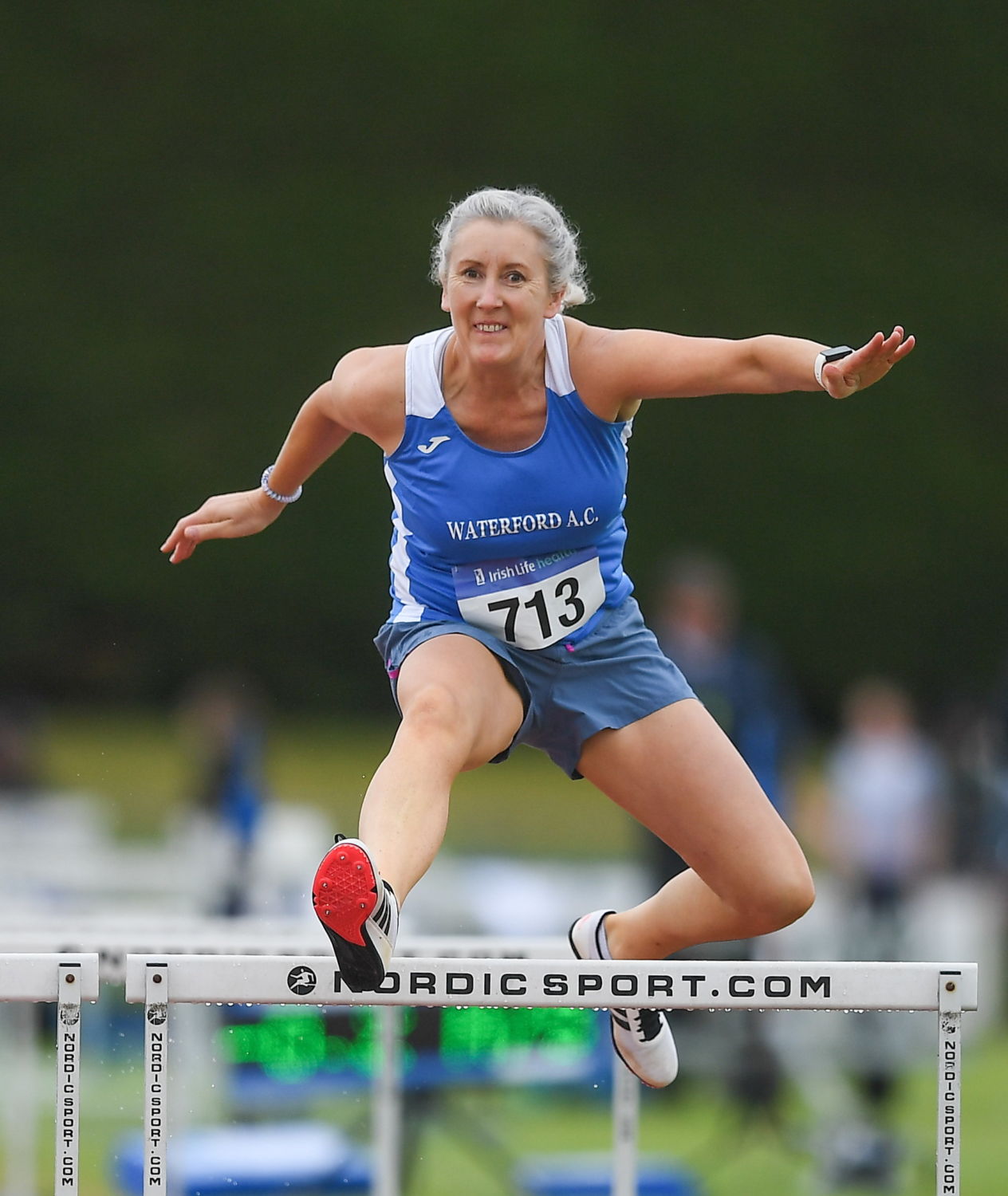 Anna De Courcy of Waterford A.C., Waterford competing in the VET 50 Pentathlon during day one of the AAI Games and Combined Events Track and Field Championships at Tullamore, Offaly.

Committee to be appointed to find Cahill’s successor