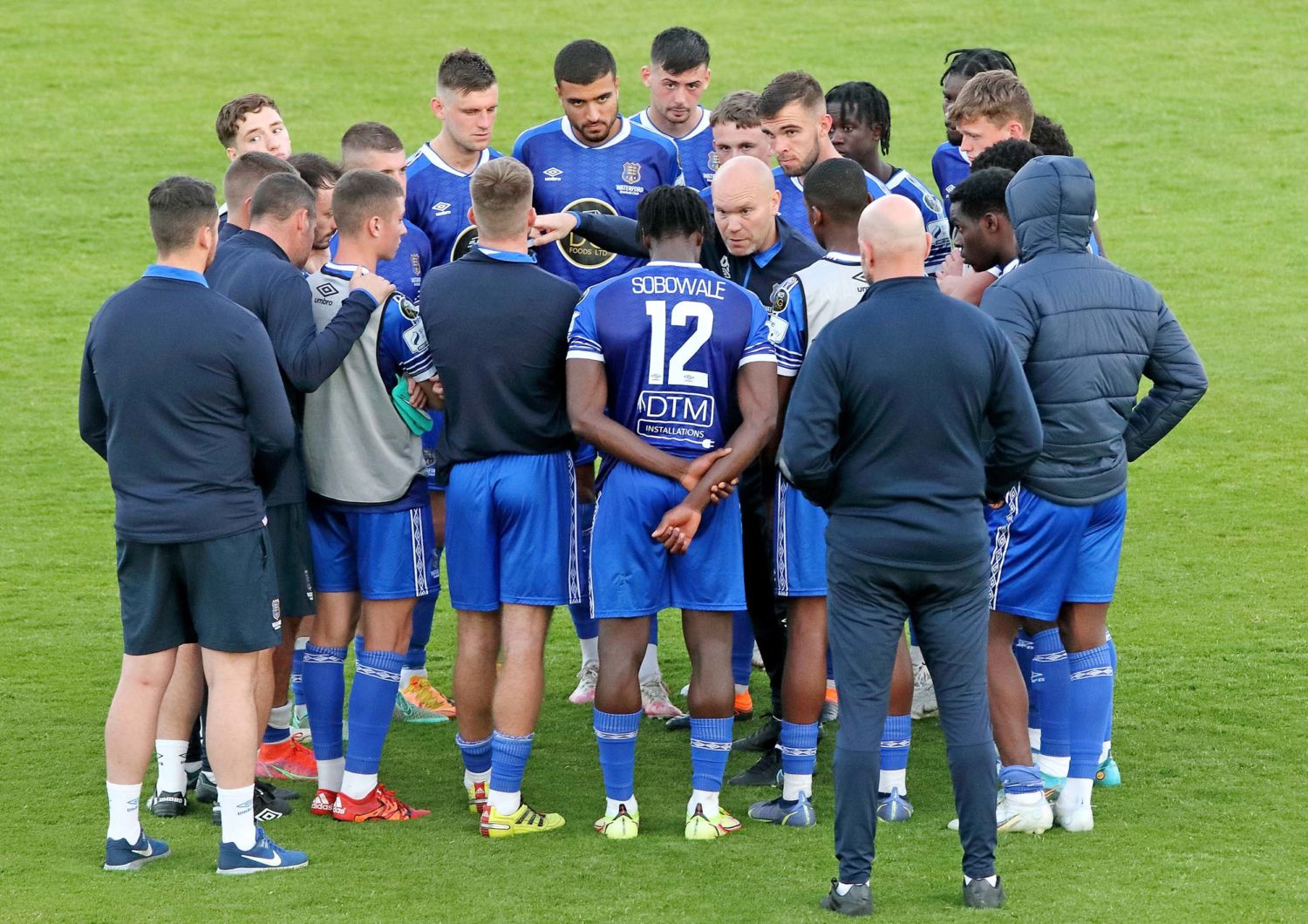 New Waterford FC Head Coach Danny Searle is excited to get his first opportunity to lead a team into the FAI Senior Cup as the Blues travel to Richmond Park on Sunday afternoon next to take on FAI Cup holders St. Patrick’s Athletic in the first round proper.

After the club reached the semi-finals of the competition last season only to lose out to Bohemians in the last minute at Dalymount Park, the draw wasn’t too favourable on the Blues this time round, but Searle is happy that his side will go into this game under no pressure.

With their opponents in Europe on the previous Thursday evening, the game will be played on a Sunday afternoon of the bank holiday weekend where Searle will be hoping that the saints will have a hungover from their trip to face Mura of Slovenia.

Speaking to the Waterford News & Star ahead of the trip to the capital, Searle said, “I think I would have liked a more easier draw for my first experience of the FAI Cup, but there’s no doubting that it’s exciting draw for us against St. Pat’s.

“I think from our perspective, it’s nice to go into a game where there isn’t any pressure on us. Everyone would expect for St. Pat’s to win that game except for everyone who is in our dressing room.  We’re going there with the confidence that if we can perform to our capabilities, we’re more than capable of creating a bit of an upset.

“As a squad we’re trying to eradicate any thoughts of who you’re playing against and how they play. We’re trying to create a philosophy and a culture here about this is how we do things, and these are the standards that we work to regardless of the opposition.

“If we stick to our roles, stick to our responsibilities then everyone is accountable for what their role is within that.  We have to maintain those standards that we’re trying to set. It’s irrelevant to me about who we are playing.

“St Pat’s been in Europe is great for Irish football and great of the League of Ireland.  We wish them the best of luck in that. For me the more Irish teams that are getting through and challenging in those games is better for the country and the league. It’s where we as a club have to aim for.

“But yes it would be nice if they did have a hangover from their trip to Slovenia and that we could take full advantage of that.  I’m sure though with the size of their squad that they won’t be too worried about having a fixture on the Sunday.

When asked if he is enjoying things since he came to Waterford, Searle added: “I’m loving every minute of it, and it’s brilliant. It’s been challenging because obviously I’ve come into a new environment, and I’m an outsider from that perspective – another one from England.

“I know people are asking why we are doing that when we have our own good coaches, and I fully respect that. I enjoy working with Gary and David.  It’s my job to earn the right for people to say hold on a minute maybe he has brought something potential different to the table.  Time will tell on that one.

“Whenever there is change, good, bad or indifferent, there is always trauma.  We had that with our two defeats, but we’re started to try change the mentality of the group. It will take time. It’s not a quick fix and if I could change mentality with a click of a switch I would be probably in Real Madrid dressing room and not in Waterford’s.

“I’m not a genius. It takes time to build a philosophy, it takes to build a culture, but we’re getting there. What Gary and David did before is brilliant. They put in some good foundations in place, but it’s now up to the team, the staff, and the players to build on that.

“I’m still building repour with the players.  I’ve said to the players in the dressing room that it’s not about liking each other, not about been friends, but if we’ve got a common goal, which is promotion. Everyone in the group wants to get promoted so that gives us a fighting chance.”