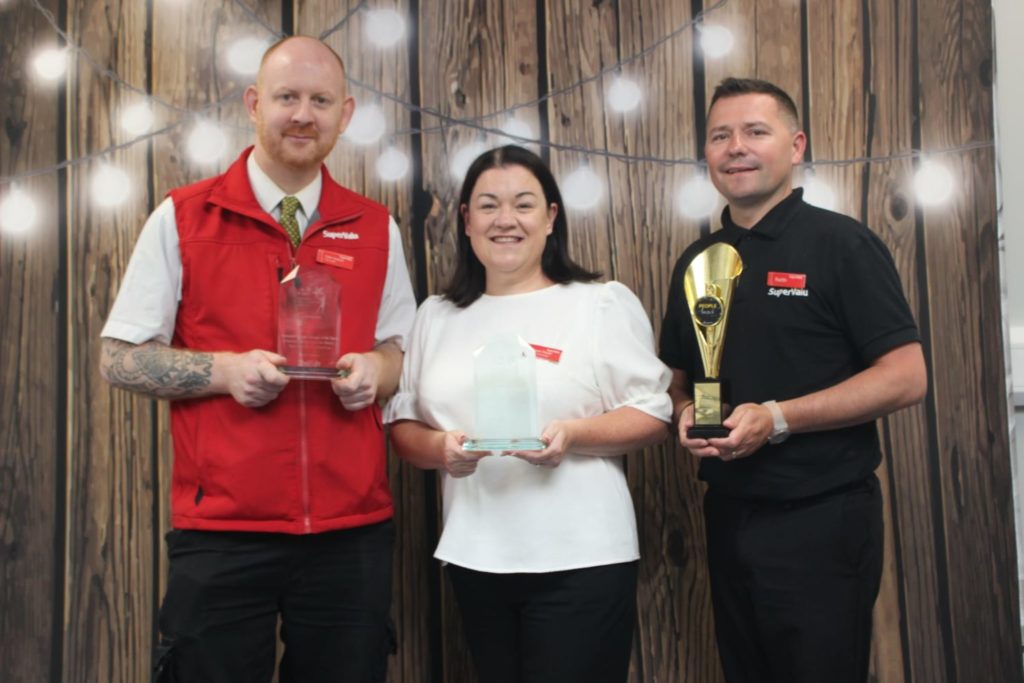 Keith, Susan and Edmund with the respective awards

THERE were celebrations in Super Valu Kilbarry this week after three staff members won awards at the company’s national awards ceremony and then at the Shelf Life Grocery Management Awards 2022.

In Super Valu’s Company People Awards, which were held on June 30 in the Clayton Hotel in Dublin, there were over 1,100 nominations received throughout Super Valu stores all over Ireland for employees who go above and beyond every day in their daily work. There were nine separate nominations and Keith Fitzgerald from the Kilbarry store was nominated for ‘Ambient Colleague of the Year’ due to his strong work ethic and being someone who goes that extra mile every day. Keith has worked in numerous departments in Super Valu Kilbarry and according to Super Valu Assistant Manager, Stephen Aylward, brought a “large volume of repeat sales to the store in 2022” due to connections he has attained along the way and has also made connections with various charities and the local communities in Waterford.

“Keith is enthusiastic and takes pride in his job and the success of our Kilbarry Store, and he is the epitome of a true team player,” Stephen said.

Keith was shortlisted in his category with two Dublin employees and had to attend a three-panel interview in Super Valu’s Lucan Support Office with Senior Members of Management. To everyone’s delight Keith was announced as the winner and brought home the trophy for his category. Some of the comments from the interview panel highlight why Keith was successful: “This colleague has gone above and beyond in bringing sales to the store, their passion and energy facilitates a positive environment for colleagues to work in. He drives awareness for cancer support, Pieta House, LGBT+ to name but a few all while doing his day job. His personality is infectious, and you can’t but smile when you hear his stories, his passion shines through.”

At the Shelf-Life Grocery Management Awards, which were held in the Royal Marine Hotel Dun Laoghaire on July 6 last, Super Valu had two employees up for awards – Edmund Galavan for Protein/provisions Manager of the Year and Susan Lennon for Supermarket Delicatessen/Food to Go Manager of the Year. Once again Waterford took home the gold on both occasions.

“This has been a great achievement for Super Valu Kilbarry,” said Assistant Manager, Stephen Aylward. “Keith thoroughly deserves the recognition he received for achieving such a fantastic award and I’m sure our regular customers who know him well would agree that this is a fitting accolade for such an amazing colleague. Along with this both our Deli Manager Susan Lennon and Protein Team Leader Edmund Galvan are not only fantastic at what the do in the store but also deliver a top quality service to our customers. They have managed to achieve an accolade that is almost unheard of in retail, winning two department awards from the same store. We are all so proud of our amazing team here in Kilbarry and would like to take this opportunity to thank all of our customers and look forward to seeing you all in store again soon. Keep an eye out in store for our team of award winners, it’s safe to say our store is in safe hands.”