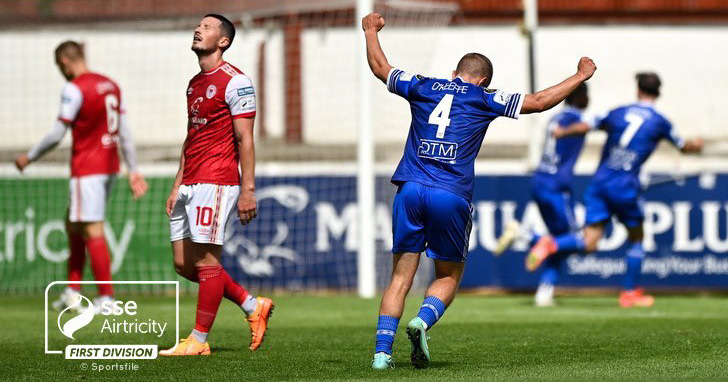 Niall O’Keeffe celebrates one of the Blues’ three goals in their great win over St. Pat’s. Photo: Waterford FC on Twitter.

An incredible performance from Waterford FC saw the Blues knock FAI Cup holders St Patrick’s Athletic out of the cup in the first round after a thrilling tie played at Richmond Park this afternoon (Sunday).
Waterford struck the front with a brilliantly worked goal on 12 minutes when Junior Quitirna released Phoenix Patterson down the right flank, who in turn put the ball to the back post with a wonderful cross, and Wassim Aouachria found the near corner with a left-footed finish.
The hosts were back on level terms from the penalty spot six minutes later when Mark Doyle was brought down in the area by Tunmise Sobowale that saw referee Rob Hennessy point straight to the spot, and Ronan Coughlan sent Paul Martin the wrong way from 12 yards.
Pat’s took the lead from a set-piece on 28 minutes when they won a free out on the left that saw Thijs Timmermans whip over an excellent ball to the back post where Tom Grivosti beat Paul Martin with a free header.
Wassim Aouachria was handed the equalising goal on a plate four minutes later when he took advantage of mistake by Sergi Atakayi to race clear on goal, and he slipped a low left-footed shot past Joe Anang from just inside the area.
A crazy first-half continued to produce the unpredictable as Danny Searle’s side struck the front three minutes before the break. Tunmise Sobowale’s throw out on the right saw Junior Quitirna play a neat 1-2 with Shane Griffin, before curling a brilliant left-footed strike past a helpless Joe Anang from 18 yards.
area.
With the Waterford player out on their feet considering the effort that they put into the game to this point, there was a moment of reprieve at the other end on 78 minutes when Quitirna was fouled out on the right-side, but his free-kick cleared the crossbar.
Chris Forrester had a chance four minutes later when he couldn’t hit the target with an effort from the edge of the area, before the hosts created another opportunity seven minutes from time, but Tunde Owolabi failed to hit the target from 16 yards.
Paul Martin produced a stunning save on 86 minutes when he denied the Saints an equalising goal when he somehow kept out a certain goalbound effort from Joe Redmond after Breslin’s delivery from the left-side with the rebound from Mark Doyle going over.
Roland Idowu should have wrapped the game up two minutes later when he got free on the right-side of the area, but he blazed over the bar, and after withstanding six added minutes, the final whistle from referee Rob Hennessy brought incredible celebrations.