Mike Leahy, Spraoi’s Artistic Director who has been involved in the festival since Day One!

THE Spraoi Studios in Carrickpherish is where Waterford’s International Street Arts Festival dropped its permanent anchor in 2003.

“To move out to Carrickpherish when we did and to set up shop there was absolutely brilliant,” according to Mike Leahy, Spraoi’s Artistic Director.

“Prior to that, we’d been based in a dock shed, from there we went to what’s now The Granary, home to the SUTE School of Architecture in The Granary, after that we ended up in a garage in The Glen before we made our way out here. There was only so much we could do in any of those particular pre-2003 spaces and none of them were ever our own – we were pretty much always waiting to be thrown out. We couldn’t do anything all that major in any of those spaces.”

Mike continued: “Then around that time, a lot of these builds began to disappear in availability terms as the boom began to kick in, so all those sheds and so on were either knocked down or repurposed. And it still shocks me to think we’re 20 years up here at this stage, in what is still Ireland’s only purpose-built street arts creation centre. To have your own home, to have a place where you can lay out your tools and store your gear where you can access it readily without having to store stuff away, it really was a huge boost for us.”

Said Spraoi Director TV Honan: “Because of the level of engineering skills and equipment being used in the studio, it’s often been said Spraoi is like a cross between a shipyard and artists’ studios. There’s a touch of old Waterford here when it comes to what we craft, engineer and retain. All Spraoi Parades been created here since 2003 and it’s an amazing space to occupy, a far cry from that first decade of ours when we sought out whatever spots were available during any given year.”

Mike Leahy said the move to Carrickpherish meant Spraoi could build with the future in mind. “It represented a massive mindshift; it gave us the means to build as big as we were thinking! We no longer had to pre-occupy ourselves with having to throw stuff away or where we were going to have to store a huge range of props, materials, equipment and so on. Up until a couple of years ago, we’d have regularly had people asking us: ‘where do ye get all the stuff?’. We make all our stuff and that’s something we’re really proud of. That level of awareness amongst the general public about what we engineer and build has grown a lot and I definitely think that knowledge has further enhanced the public’s appreciation for what we do and how we do it.

“And people know where we are now. We have people from home and abroad coming into us for meetings and looking to get some advice and in some cases, you can see their jobs dropping in terms of the facility we have at our disposal now. It just reflects how Spraoi has grown and upskilled over the past 30 years, but particularly in the last 20 years since we moved into the studios. And we’re a part of a still growing community in this part of the city as well where more houses are due to be built over the next few years. I think we make for pretty friendly neighbours, when all is said and done!”

Apart from designing and building parades at the Spraoi Studios, major commissioned spectacles are also devised and delivered at Carrickpherish.

“Past projects created in the studios include the opening ceremony for Cork 2005 European Capital of Culture and more recently productions for the Bram Stoker Festival at Dublin Castle,” said TV.

The studios also house workshops, rehearsal rooms, costume rooms, storage and administrative areas. In addition, the studios also host residencies by street artists from all over the country.

TV added: “Typically, visiting artists stay for one to two weeks as they devise and rehearse new shows. Work created at Spraoi Studios has subsequently staged at festivals in Europe and farther afield. Waterford street artists, including the Curious State company regularly use the studios for rehearsals and for developing new work and for us to be in a position to facilitate other creative groups and organisations is just tremendous. We’re nourishing more creativity and that’s wonderful.”

Said Mike Leahy: “We’re an all-round creation centre here, one of the few of its kind in the country in terms of the genre we operate in. We create our work while we’ll also have companies coming into us, as they did over the winter and they will during the summer, making the most of the space, time and help that we can offer when it comes to developing new shows.”

Spraoi’s growth, be it in terms of floorspace within the city, the scale of the annual Festival and Parade, along with the creative imprint it has made both nationally and internationally, is a homemade success story. Who knows what the next 30 years of craft and creativity in Carrickpherish shall catalyse? 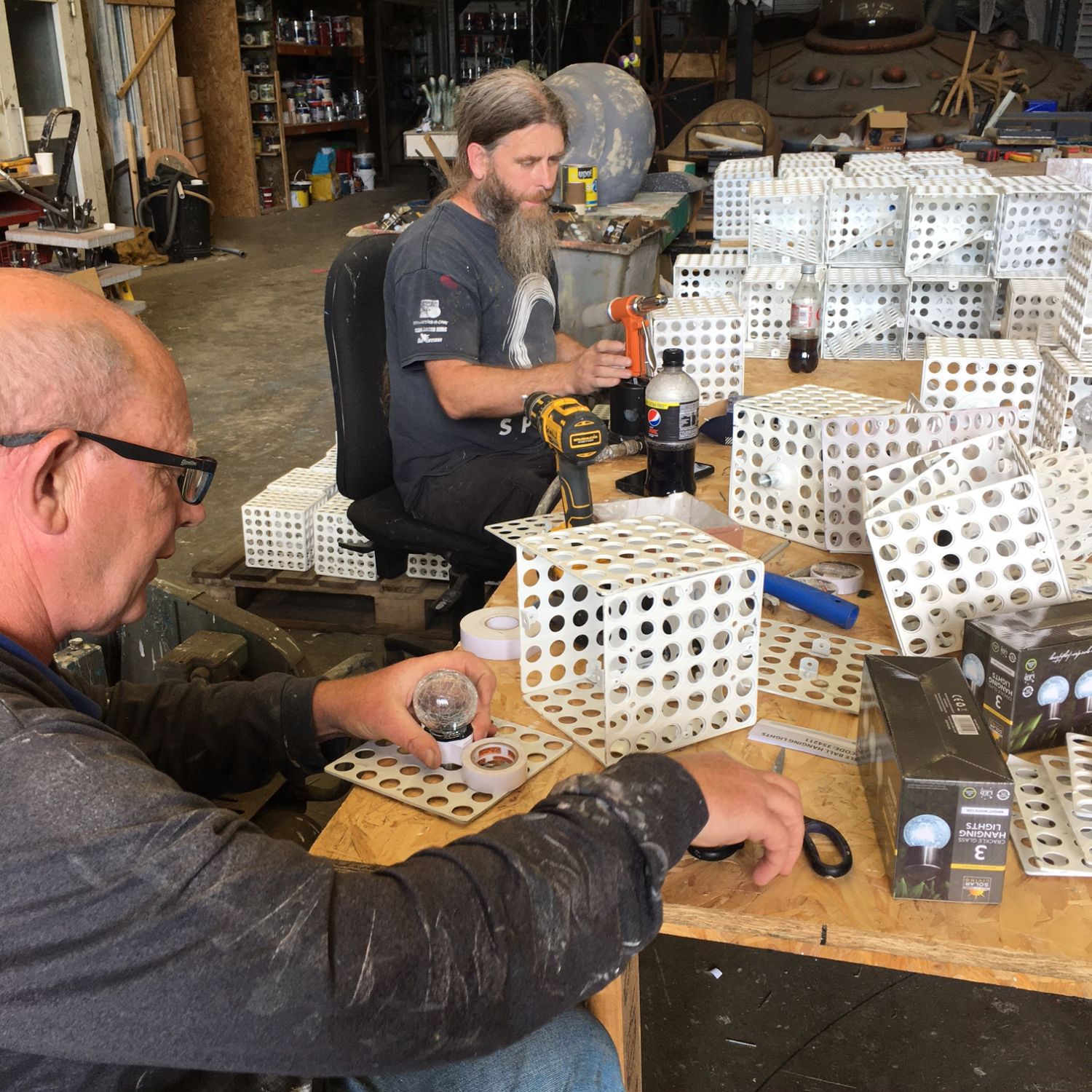 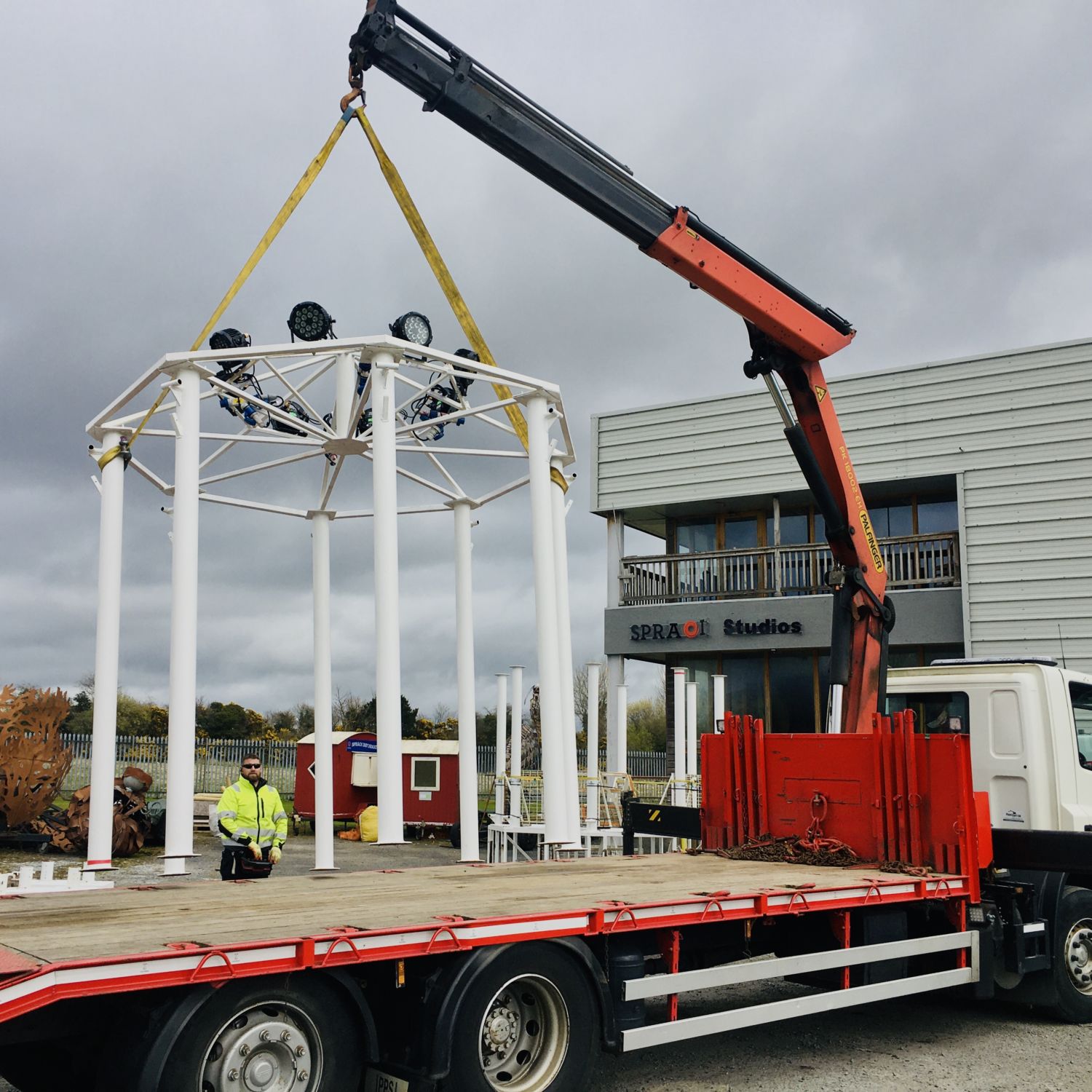 The centrepiece of the ‘Prism’ set being loaded for delivery.

ATN gets the back garden pulsing