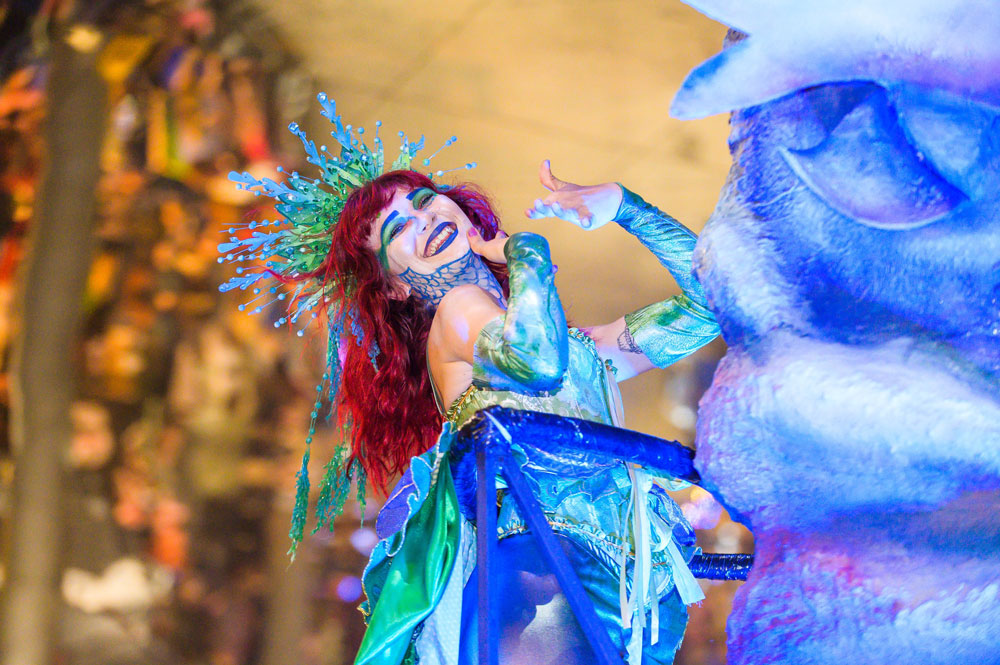 “The parade is an entertainment, an event, a meeting place, an encounter with art, a platform where regular people are stars for a day.”

THERE was a time, hard and all as this is believe in 2022, when one referenced a parade in Waterford that just one date and event sprung to mind: March 17 and all that goes with Lá Féile Pádraig.

But three decades into the wild and wonderful adventure Spraoi has benignly kidnapped tens of thousands of us on many an August Bank Holidays, reference parade and Waterford to many nowadays and Spraoi emerges as pre-eminent.

“Maybe this isn’t a sentiment always appreciated in Waterford,” TV Honan theorises, “but I’ve long ventured the opinion that the Spraoi Parade is a contemporary manifestation of energies that drove ‘Tops of The Town’”. It’s something I’d never previously considered until the Spraoi Director recently presented me with this intriguing perspective.

“Now, not everyone in the city may appreciate such a comparison. But consider it in the following terms: we have professional artists, personally invested in Waterford, who are in turn investing so much of themselves and their expertise into devising and creating the annual parade. I maintain, and most agree, that alongside their input, it’s the voluntary performers that really connect the parade with the community these people are from. It’s a dynamic which was at the heart of ‘Tops of the Town’ and remains evident through our Musical Societies, which remains a passionate blend of professional savvy and enormous amateur, community input. That same dynamic, for me, is at the heart of the Spraoi Parade’s appeal and longevity and has made the event such a vibrant expression of Waterford’s proud sense of creativity and thriving artistic culture.”

Mike Leahy, Spraoi’s Artistic Director, was as interested in TV’s argument as I was when we recently spoke about the enduring success of the parade, the centrepiece of the annual Spraoi Festival, which is scheduled to kick off at 9:30pm tonight.

“Creativity, enthusiasm and a sense of fun sustained all of these organisations and groups TV mentioned there,” said Mike.

“And the parade has become the beast it now is because of the history generated and strength of events like ‘Tops’, musicals, youth arts, Young Red Kettle and so on. In order to make something as large scale as the parade is, you need that level of energy behind it; it was never a case of starting from scratch – that bedrock was there, the skillset was already there. So we drew from what was already there, adapted it and made it different, bigger and ours. So there’s definitely a truth in what TV said, no doubt about it.”

Planning for the following year’s parade begins before the dust has settled following each August Bank Holiday, according to Mike.

“We’d be thinking about what’s next pretty much straight away; you’d have Patrick’s Day in mind as well of course and you’d be thinking was there something you’re making for then which could work for Spraoi – sometimes that works out and sometimes it doesn’t. But yeah, we’d be on the case pretty early alright – it’s all part of the rhythm we’ve built up with it over the years.”

And no two parades have ever looked remotely the same, a laudable feat given the scale of the event Spraoi craft and stage.

“We consciously work on creating a different parade every year,” Mike added. “One year we might opt for something serious and dramatic, using natural materials and then the following year we know we’re going to go full-on glitz and glamour and pure fun. It’s a conscious decision to change things year on year to keep it interesting for both ourselves and for the people who line the streets of the city with their kids. And that all helps to create an excited air of suspense about what we’re going to do with the parade every August.”

TV describes the parade as “an entertainment, an event, a meeting place, an encounter with art, a platform where regular people are stars for a day – most of all the Spraoi Parade is ours! It’s Waterford’s and we ought to be proud of it”.

He added: “For almost 30 years, people from all walks of life perform in the parade. Some have arts backgrounds, many don’t. All are welcome because the Spraoi Parade is as much about community as it is about culture.”

Tonight’s parade is titled ‘Discordia’. It’s going to be a celebration of music in all its forms, utterly appropriate for our ‘City of Music’, whose cultural history has been illuminated by decades of variety and musical theatre.

Said Mike: “Nowadays, we tend to affiliate towards a different tribe. In my day, back when I first came to Waterford, you had the Mods, the Rockers and the Punks. So we’re playing with that idea when it comes the musical genres we readily associated ourselves with – the notion that each genre is, in essence, a tribe.”

Without revealing too much detail (“we don’t want to give too much away just yet!”), Mike said how the genres/tribes will be showcased remains a work in progress. “What I can is that City of Waterford Brass will be part of the parade and we’ll have some other live performances too so it’s going to be a lot of fun – and again, very distinctive. Very Spraoi.”

Both TV and Mike referenced the hundreds of people who make the parade possible. “There’s about 200 people in this year’s cast,” said Mike. “There’s at least 30 to 40 people involved in the construction, building and movement of the parade. We’ll have at least 80 stewards involved on the ground so all in, on the night, in terms of what it takes to get the performance out there, you’re talking between 400 and 500 people.

“It really underlines the extent of the community involvement that drives Spraoi and the buy-in factor of so many people. People get involved, they get a buzz out of it and then they stay involved. At this stage, we now have three generations from several families contributing towards the parade, which is a fantastic tribute to what everyone involved has helped to build over the better part of 30 years. And to be back in a mass gathering sense after the past two years is huge, of course.”

TV commented: “Thousands of Waterford people have been part of the parade story over the years. It symbolises what a community pulling together can achieve. It also singles out Waterford as a place of unique creativity and capacity. Quite simply a parade like this created in its own place is unique in Ireland.” And it’s something we should all continue to draw great pride from. Roll on ‘Discordia’ tonight! 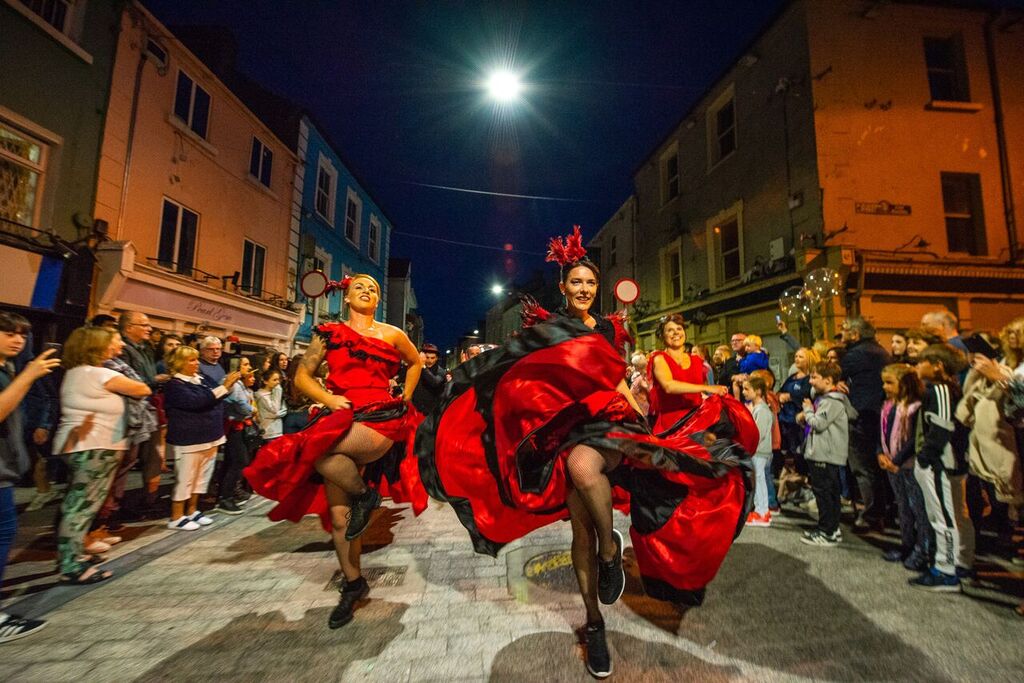 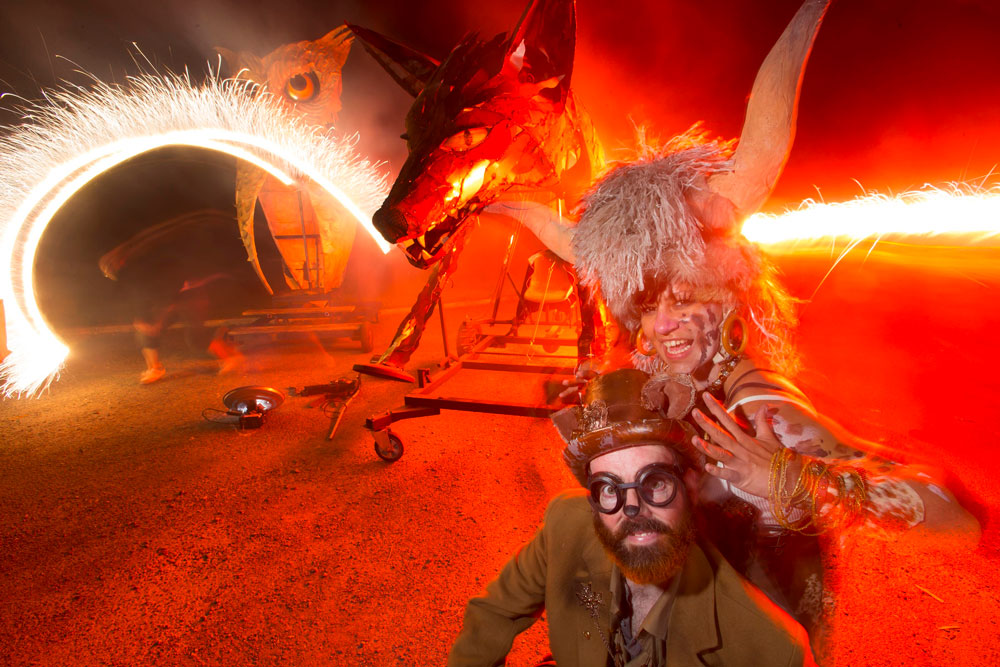