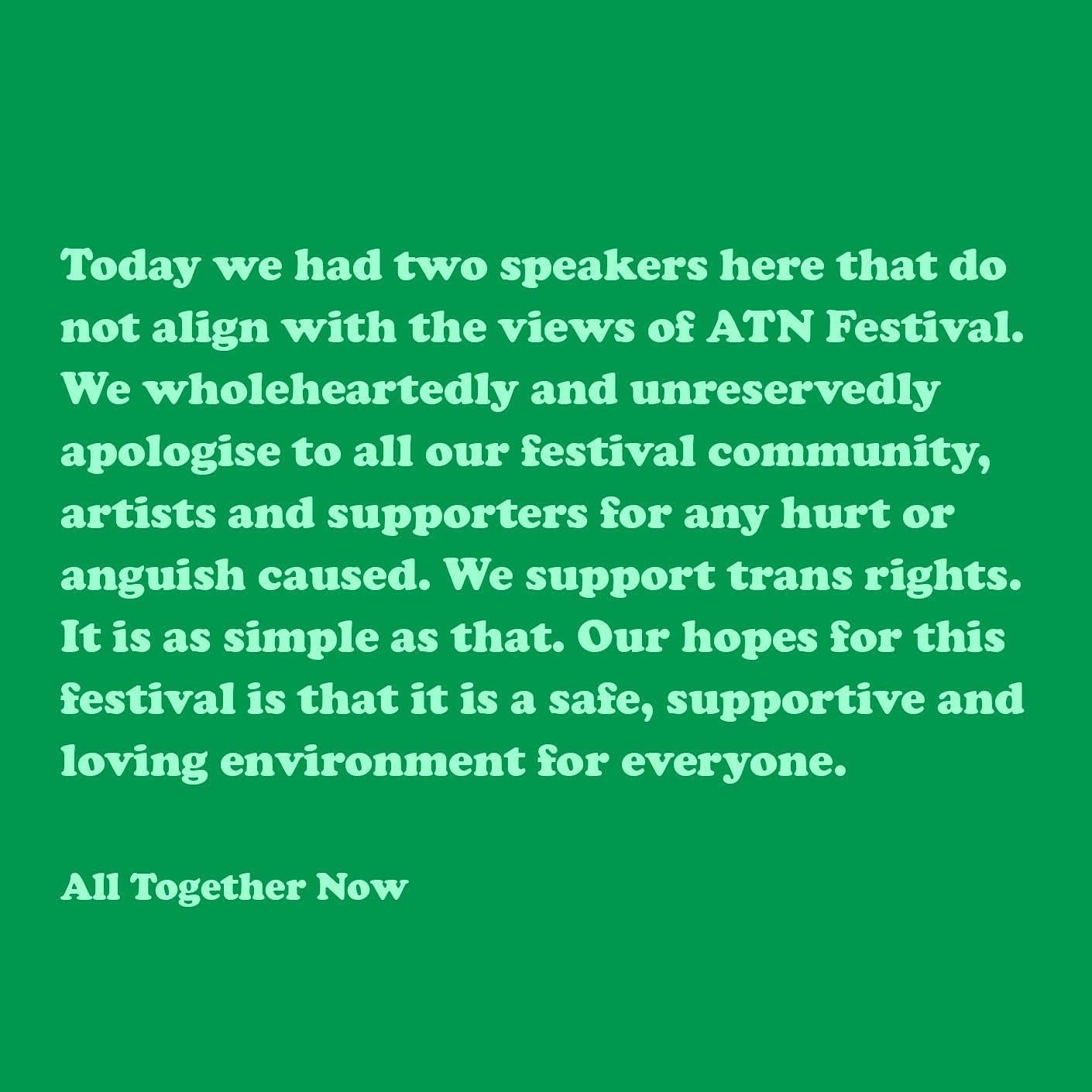 ON Day Two of the All Together Now festival, organisers issued a public response in support of trans rights and referencing two speakers from Saturday’s schedule of events.

The statement said: “Today we have two speakers here that do not align with the views of ATN Festival. We wholeheartedly and unreservedly apologise to all our festival community, artists and supporters for any hurt or anguish caused. We support trans rights. It is as simple as that. Our hopes for this festival is that it is a safe, supportive and loving environment for everyone.”

While not named in the statement, Stella O’Malley and Rachel Moran have since spoken out that they were the speakers referred to by ATN.

Immediately following the scheduled talks on Saturday at the festival, and before the above statement was issued, Rachel Moran thanked the organisers of All Together Now for the opportunity to speak at the Portlaw festival. In a public tweet, she said: “Huge thanks to the @ATNfestival for refusing to capitulate to demands from online bullies to silence women. It was a lovely event, went really well, & the highlight was the proponents of cancel culture being denied in their mission to shut women up. #TheTideIsTurning.” Stella O’Malley retweeted the tweet.

The statement was issued by All Together Now Festival shortly afterwards. Responding to the statement issued by All Together Now, although the speakers were not explicitly named, Rachel Moran tweeted: “Which views of myself & @stellaomalley3 do not align with yours @ATNfestival? Which views are you attributing to us so appalling that you must publicly apologise for an association with us & believe likely to have caused “hurt or anguish”?”

Stella O’Malley said on Monday on Twitter: “I spoke about “Sex and Intimacy” with @RachelRMoran at @ATNfestival on Saturday. Trans issues were not mentioned, in any way, even once during this event. It was a lovely event, our talk was received very positively, with loads of questions, & there were no complaints about it.”

Irish author, Emer McLysaght called Rachel Moran out on Twitter, saying: “You are openly transphobic. ATN has stated that it supports trans rights.”

In response, Rachel Moran said: “You Emer are a socially privileged twit who doesn’t give a toss about impoverished educationally disadvantaged women incarcerated with male offenders.”

During their set, Pillow Queens said: “Trans rights are human rights, trans women are women,” seemingly in a direct reference to the statement issued by All Together Now earlier in the day. Musician CMAT also spoke out vehemently in support of trans rights during her set on Sunday afternoon.

A litany of reaction has taken place online since Saturday regarding the matter and the facilitation of free speech in a public forum.