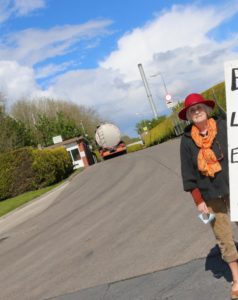 AT the July Meeting of Waterford City & County Council’s Metropolitan District, Director of Services Michael Quinn called on the media to make the public aware of a licence application made by a meat processing plant in Ferrybank, so that they can make a submission. Anglo Beef Processors (ABP) Ireland, who are based in Christendom, Ferrybank, have applied to the Environmental Protection Agency for a review of their licence to allow them to build an installation, which would be used for the rendering of animal carcasses.

Speaking at that meeting, Independent Councillor Mary Roche and Green Party Councillor Jody Power expressed concerns about the licence and another new building.

“There is a smell that emanates from across the river and engulfs huge parts of the city, all the way out to the city and the Dunmore Road, the Park, Ballytruckle and more,” Cllr Roche said. “I think people should be made aware of it and they should be making submissions.”

Cllr Jody Power has been consistently making complaints about ABP, most recently after he attended the Mayor’s Ball at the Tower Hotel in May. He said that as he and his party of four left the hotel they were hit with a “pungent odour” and were “forced to endure this outrage and breathe in the foul air as we left the Ball”. The EPA issued the following message in response:

“The Agency has carried out almost weekly odour assessments in the vicinity of the facility since March 31, 2022, while intermittent off-site odours were detected, they were not at levels considered to be a nuisance and the facility was therefore operating within the conditions of its IE licence, P0040-02 with regard to odour control.”

“We have offal now coming into the Rendering Plant from all over the country – Waterford is one of only three rendering plants left in the country,” Cllr Power said. “There is no cover and no sealed containers that offal should be contained in and it leaves an awful smell coming through the city and also we have excrement being put on the city.

“Can we include something in our draft prevention by-laws to make sure that Waterford can do something to control the smells and control the environment that we live in. Waterford City & County Council must have some kind of control. There have been eight public complaints about ABP in the last six months to the EPA and two non-compliances were verified by the EPA. There seems to be no enforcement and no sanctions to the company for that to happen.

“Can the Council not put pressure on the EPA to do their job, which is to protect the environment. We’re the capital city of the South East and we should have some powers to prevent these smells over the city that are happening continuously.

“They can’t continue willy-nilly the way they do. The EPA correspondence tells us that when you try to make a complaint on the EPA website it says to make contact with the company first to make sure that the smell is stopped. If everybody does that, the EPA has no record of when the smells and discharges happen. These discharges are illegal so the council should be far more enforcing to make sure that this is taken care of because it’s unacceptable. In any other country in the world there would be massive fines in response to toxic smells like this.”

Afra Cronin from Ferrybank has been a one woman campaigning machine against the meat rendering plants in her area for many years now. Last week, she spoke to the Waterford News & Star as she protested against the owner of ABP, Larry Goodman, on the Mall in Waterford City.

“We need to get people to understand what is happening here,” Afra said. “The EPA have thrown it out to the public to make submissions against ABP and we need as many people as possible to do that. I viewed that council meeting where they spoke about this licence, and it was as if my neighbour’s toilet was blocked – that was the standard of debate that went on. This is so serious in my view. This will get the go ahead unless people do something about it and if it does you’re going to be stuck with those smells for the next 30 years. The people are not being told about this and that has to change.”

So far, the EPA has received just 10 submissions about this licence review, none of which are from Waterford City & County Council. Afra Cronin made a substantial submission, which outlines some of the major concerns she has expressed in recent years. A submission by Natasha Delaney was concise and to the point: “The air quality in the Ferrybank area is putrid. The smell is coming from the ABP plant. Trucks carrying oozing remains of dead animals travel the road to and from the plant several times a day. There are days where I pack my children into the car and leave the area because I cannot bear the smell around our house. It is disgusting.”

Christina Sinnott, a long term resident of Ferrybank, objected to the licence on a number of grounds.

“The air quality where I live is atrocious,” Christina said. “My family and everyone else who lives in this area are subjected to vile air quality where the constant smell of the trucks carrying dead decaying animal bodies to and from the ABP factory is a constant problem. It makes myself and my young children physically sick. We can’t enjoy our garden space because of the vile smell coming from this factory and the trucks associated with the factory. I can’t hang clothes out to dry outside during the warmer weather when the smell is constant because the clean clothes smell of death and decay.”

Cllr Jody Power told the Waterford News & Star that the people of Waterford and South Kilkenny should make their feelings known to the EPA “en masse”.

“As the Ferrybank ABP rendering plant cannot operate without emitting noxious odours and the EPA cannot protect our Waterford City from these odours, the only solution is for this plant to be shut down and removed completely to a more suitable and remote location – the sooner the better,” Cllr Power said. “Unfortunately, it’s Kilkenny County Council that has jurisdiction in this regard, another reason why Waterford City’s strategic development as a concentric city cannot come soon enough. In the meantime, I would implore everyone to make a submission.”

ABP said it is currently engaged with the Environmental Protection Agency (EPA) on a routine license review for its Ferrybank plant. “ABP is fully cooperating with the EPA on this matter, which is currently underway. The company, which has operated in Ferrybank for almost 50 years, is fully compliant with the EPA license for its plant at Ferrybank and the licenses for all of its other plants across the country. The company regularly engages with the EPA on a variety of matters, including announced and unannounced site visits,” ABP stated.