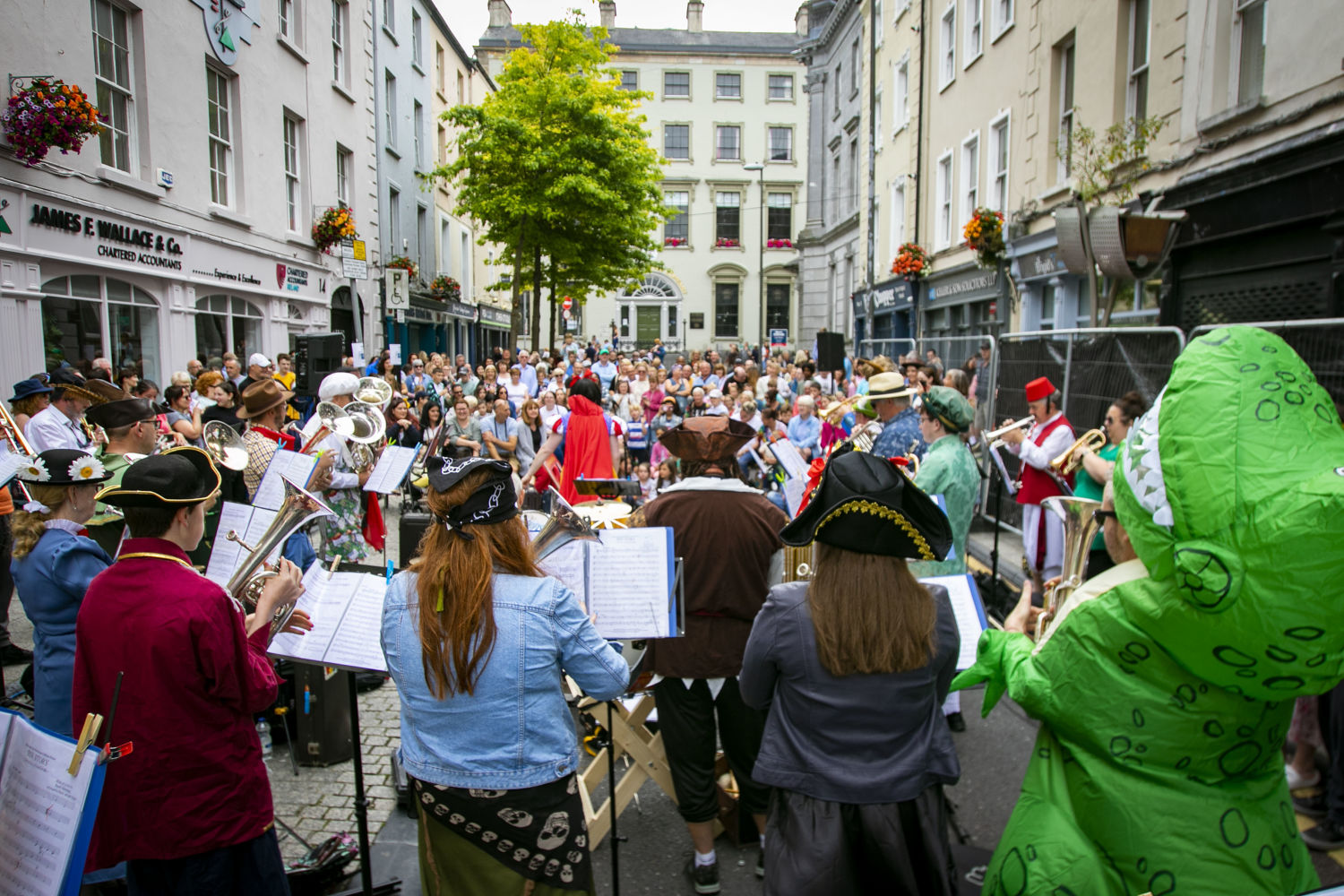 SPRAOI celebrated 30 years of street theatre with an action-packed, fun-driven, riot of street madness that breathed life and energy into the streets around the centre of Waterford city.

With the throbbing pulsating noise and oomph pulsating from the Spraoi drummers hanging in the air, the punters wandered around the city seeking out street entertainment that is quirky, edgy, funny and in-your-face.

Street entertainers are not naturally shy people. They harangue, harass, and haul in all-and-sundry in their offside view of the world. Many of these performers would be in Vaudeville or variety entertainment. Sadly this form of theatre no longer exists – except on the street. Robin Williams started there; so did Bowie and Jewel and Harry Anderson and…

‘Why do street performers do it? Because they believe passionately that the street is our theatre’

It’s the oldest form of theatre there is. All it needs is a street corner, a crowd and actors willing to experiment with performing spaces that are normally street thoroughfares. Street theatre is the great leveller. Many people who have never seen the inside of the Theatre Royal or Garter Lane can watch a street show; its audience is anyone and everyone who wants to watch it. And the audience is here in droves.

Waterford people are very proud of Spraoi. It’s in the city’s DNA. We do it well. And we all own it. Cobbled streets become living, breathing, heaving presences that seem to take on a life of their own.

And, yes, the rain splashed down somewhat on Saturday afternoon and we all scampered for the coffee shops. But hey… it’s Ireland… right??? Sunshine is sometimes an optional extra.

And the great thing about Spraoi is that you never know what mayhem lies around a corner. The whole centre of the city is buzzin’ and jumpin’. And it’s only day 1. John Roberts Square is a gathering hub of noise that attracts big crowds with everyone searching for a vantage point. ‘Blaas of Glory’, dressed in sexy spandex straight from the eighties, is a hilarious mobile act like you’ve never seen before. These eight rockers-in-tights blast it out on the square with sousaphone, piccolo, glockenspiel, banjo, accordion, and multi-voiced background harmonies. And they’re not reluctant to boast their achievements claiming that they have met “no musical equals on their triumphant 10-year long march around Europe’s finest festivals of street theatre.” I’m there. 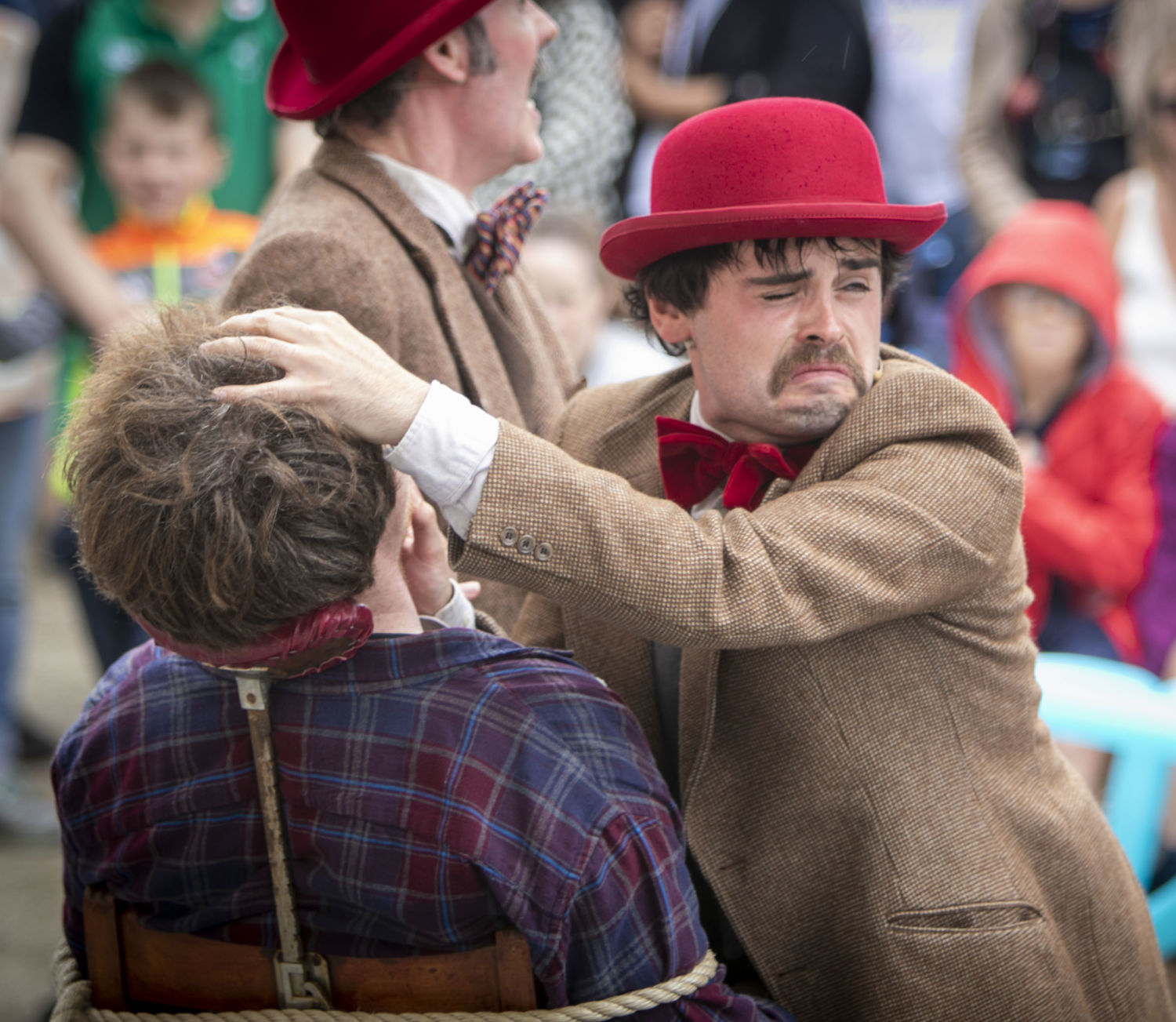 ‘The Astonishment Factory’ have gathered a crowd and are inviting all and sundry to make magic all on their own. The kids are agog with wonder as the magic unfolds. And then it’s off to the Roving Court and an invitation to “Roll up, roll up!” because ‘The Roving Court’ is in session. A small boy in a Dubai Celts jersey confesses his naughtiest crime when he shouted at his Mum “get my breakfast”. Judge Judy it ain’t because this is a back to childhood experience of courtroom drama where the child is central to the verdict. Pompous judge, the Right Hon. Ms Titebottom, and greasy barrister, Mr F. Arts Loudly, hear the naughtiest childhood crimes, committed years ago but finally brought to justice in a trial by child jury. Kids judging and punishing adults – they just love it! Sitting in the warm weather in John Roberts Square, the next act is just a millisecond – or maybe, more – away.

Along comes ‘The Absurdist Pipe Band’ with their honky horns, clown shoes, and kilts are everywhere to disrupt the winding streets of the oldest city in Ireland. Pipes and drums are definitely the order of the day but The Flintstones and Star Wars aren’t your usual pipe band tunes and getting too close is just asking for it.

Down in Gladstone Street, there are big family crowds to catch ‘Tape That’ – two acrobats that fashion a colourful world using tape, everyday objects and stunning acrobatics on the flagstones. This is a child’s imagination at work when a simple piece of tape becomes a skipping rope and a crazy world of obstacles for the dynamic duo to deal with.

The Déise has its own input too. The WAMA Drumming Band thunder out their unique toe-tapping beat as well down in Gladstone Street, while the City of Waterford Brass are fronting it up in John Roberts Square. They are going all Disney this year with Disney character costumes and have asked kids to wear their favourite Disney costumes also.

The Suir Ukelele Strummers feature on Sunday morning up in Constitution Square. This Waterford group have been invited to play at the Irish Centre in New York in 2023 so now – as they say themselves – “they’re getting notions”.

No cures for toothache!

Over in Parliament Square, local actors Killian Browne and Nicholas Kavanagh are ‘Messrs Smiley & Veneer’— two old-world gentlemen who travel from town to town trying to sell their “pearly-whites elixir”, a cure-all remedy that will eliminate the need to ever visit the dentist again. Ah… if only! However, it’s an insane plan, set to ragtime music, and doomed to failure. What will happen to these “greatest salesmen” who quarrel like politicians? Will they survive on their wits to sell another day? It’s a quirky street show that really gathers the crowds with the dynamic duo’s package of song, dance, slapstick, comedy, live music and the interactive banter is great craic. But, sadly, no cures for toothache. I move on.

Tidal is a Welsh dance theatre show that underlines the importance of creating bridges and connection through ancient knowledge in challenging modern times. Graceful and athletic,  Ofelia and Kim down in Gladstone Street are deep in a celebration of ancestry and feminine lineage. The dancers are in search of their Welsh, Norman and Yoruba Roots to find common ground within mythology and cosmology that they translate through their bodies and dance. There’s a big crowd here and the grace and balleticism of the young dancers is hypnotic.

‘Square 2’ over at the Strongbow and Aoife monument lies somewhere between circus and visual art. This Dutch act searches through our wonderful world of codes and patterns that is fundamental to everything we do as creatures of habit. This is a really unusual and intriguing connection between juggling, visual art, and Aoife and Strongbow’s backyard. ‘Three Pregnant Men’ are on walkabout and the title says it all! SETU’s ‘Calmast’ is around the corner in Cathedral Square with pop-ups of science fair for the young and the scientifically illiterate! Georgian Waterford is a great anchor.

I drift along The Mall and the smell of charcoal and sausage rolls, burgers, coffee is in the air; that delicious smell of barbeque inviting us to delights that are probably better off left unserved. But Spraoi is not the time for sensible. ‘On Tish’ is a noisy trio on the hunt for food, shelter, and a bit of craic! Chaos, acrobatics and a crazy absurdity is everywhere as they roam the desolate landscape that 2022 has become. They’re not too far wrong there, now.

I’m fascinated by the mecatronic world of Mécanique Vivante where chickens play the piano, chainsaws fly and the Sirens really sing. This was mechanical invention at its most spectacular! France’s Franz Clochard, artist and musician, is the inventor of the world’s only Siren Orchestra. It’s a ginormous barrel-organ of magic that combine worlds of art, performance and technology. The show begins in Gladstone Street and saunters along Lady Lane to a packed finale on The Mall.

All street theatre needs is a public space, gadgets and gizmos and it’s ‘bring on the motley’. Colour is everywhere and costuming is brash and brilliant, gestures are huge and handsome and audience appeal as lasting as the next street corner’s entertainer.

Why do street performers do it? Because they believe passionately that the street is our theatre and that the drama that fills our lives also belongs on the streets. It’s primal. It’s primitive. It’s popular. And it’s part of what it means to be human. 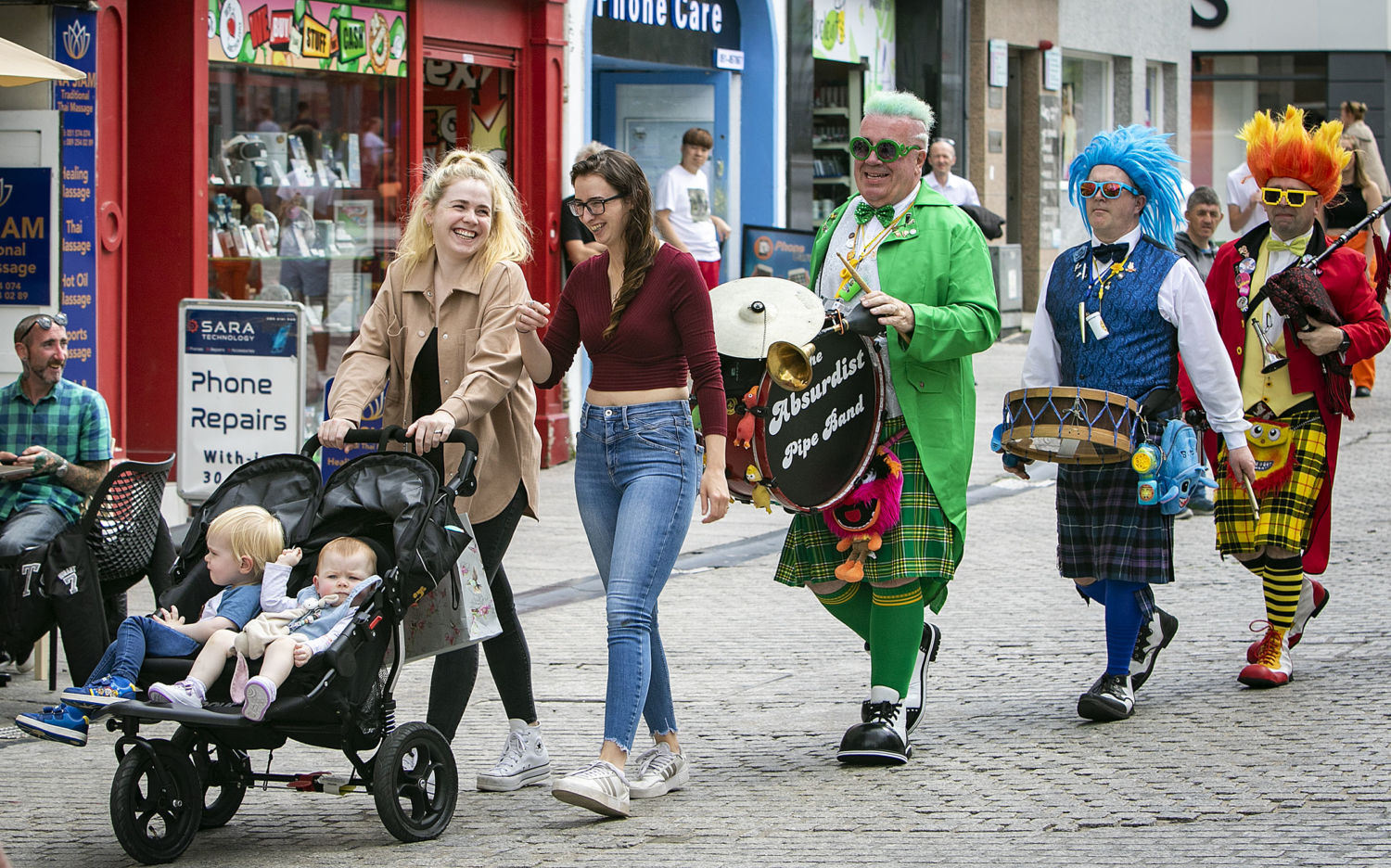