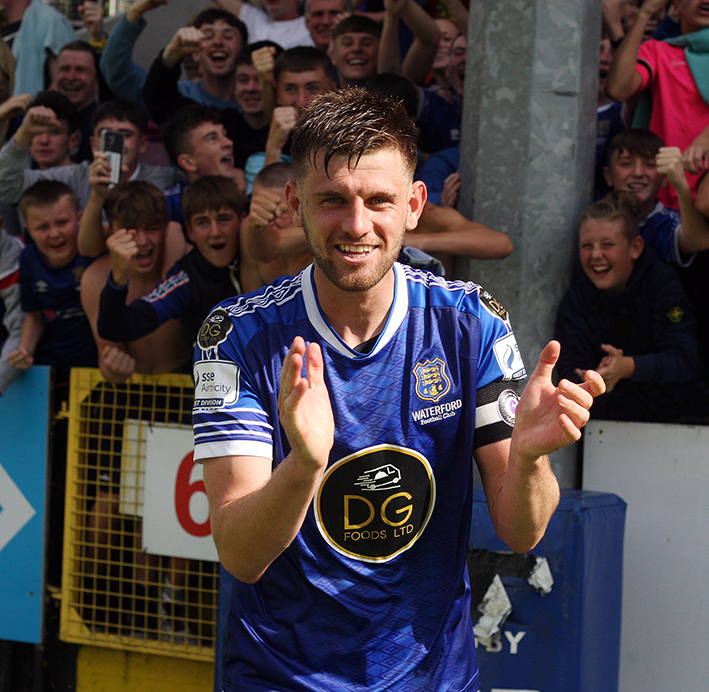 Blues skipper, Killian Cantwell celebrating with the fans after their brilliant FAI Cup win over holders, St. Pat’s, at Richmond Park on Sunday and the same below. Photos: Paul Elliott.

Waterford FC captain Kilian Cantwell expressed his delight as the Blues secured a brilliant 3-2 win to overcome St. Patrick’s Athletic in the FAI Senior Cup at Richmond Park on Sunday where he proclaimed that the squad are starting to become “men.”
Speaking to the Waterford News & Star, the Blues skipper said, “To be honest I think that it’s just brilliant to see the crowd that turned up here today from Waterford. We’re delighted with the atmosphere that our fans created, and to give them something to celebrate about afterwards is brilliant. It just means everything to us.
“I suppose we didn’t allow things get to us in training because we’re focussed on doing well for this club. From the outside, it might have looked a big worry coming up here today, but we’ve seen what we’re doing in training. I think that the gaffer and coaching staff had us set up very well.”

VERY RESILIENT
“We knew today that we were coming up to a footballing team and that if we kept our shape right that we were going to be more than a match for them. I thought that we played very well, we were very resilient, and it’s great to be in the next round.
“You look at things during the year where we conceded goals like the way we did today that we would put our heads down and wouldn’t be able to come back. I don’t think that happened at all today, and to actually comeback, go ahead, and to hold on with the amount of time that was left was just excellent.
“It’s a young squad we have here, but we’ve been saying that if you are good enough, you’re old enough. You have to be an adult out there because against a Premier Division side, you are up against men. You can’t just switch it on either. We’re demanding more standards in training, and you could see it there.
“We said that we did enough talking about how we needed to get better, but we needed to show it. If this isn’t the arena to do it against the FAI Cup champions, I don’t know where is so I’m just naturally delighted here now for everyone.
“Look you looked at Waterford over the years, I’ve always seen them as a Premier club. It’s trying to get out of the First Division that’s the thing. We need to switch on to that now that will lead to the right mindset because it’s not an easy league to get out of. I think today just shows that when we put our heads to it, we are capable.
“I think to try hold onto that lead was the most important thing. I think that if we conceded late on and got a draw, I think it would have felt like a defeat for us especially when you consider the performance that we put in. The big thing for us wasn’t to hold onto the lead, but to hold onto the win. It shows something that we haven’t seen in a while.”

BRILLIANT FANS
“I think for our own fans, it was to see how we would react to losing to Longford and to playing St. Pat’s. It was a massive thing for us to see how we would do because there’s a lot of talk about us being in the Premier Division so we’ve answered that today. We need to keep it going against Treaty next week now.
“We’ve got a result there today, but we have to take it back into the league. That’s all important because at the end of the day, that’s what we’re going to be every week. We need to show what we can do in that league, but to be honest, we need to be men now. We have to do the best we can and finish the season strong. We have to concentrate on our performances and be ready for what’s around the corner.
“Today is exciting and we have to keep the fans excited. They are paying in, and we want to give them something to watch. I think at this moment, this is exactly what we need. We have young players that are so eager to do, they are so confident, and today is a massive day for all of us. We want to give our fans that feel every time we play, but I’m delighted that we could do it today.” 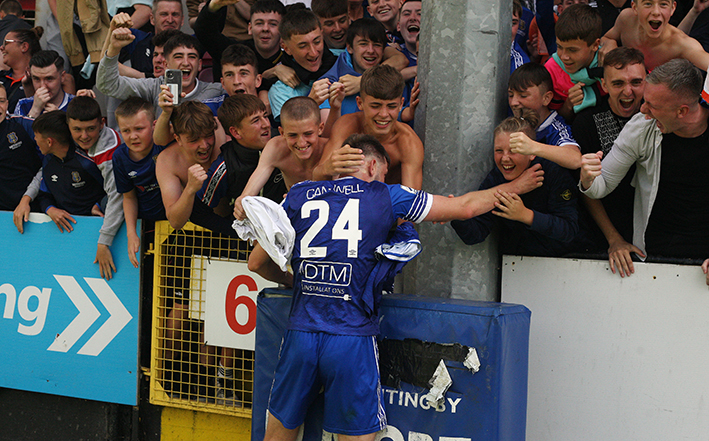