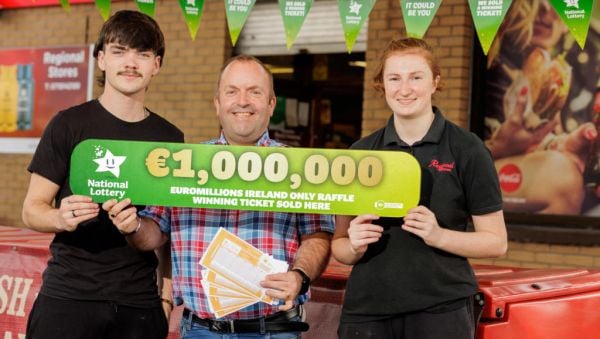 Someone in the county has woken up as Ireland’s newest millionaire following Friday night’s EuroMillions draw.

The winning quick pick ticket worth €1 million was sold in The Regional Stores, Ballinode in Sligo.

Typically, in every single EuroMillions draw, ten players in Ireland win €5,000 on the ‘Ireland Only Raffle’.

Owner of the store Michael Higgins was elated when he found out his shop sold the winning ticket. “The first thing I did was ring my wife and asked her if she played last night, she said she did.

“I told her to get in quick and check the ticket! But alas it wasn’t to be us. We were surprised to find out though we did sell the winning ticket to one of our lucky Sligo customers!

“We’re a local family business, open 50 years with the forecourt and 35 years with the shop. We’re selling the lotto in here since day dot and we never had a substantial winner, until today! We’re absolutely delighted for the winner.”

The National Lottery is encouraging all of its players to check their tickets carefully. There was no winner of the €30,356,111 jackpot on offer, which now rolls on to €40 million next Tuesday, August 9th.

A National Lottery spokesperson said: “Imagine how it would feel to wake up more than €1 million better off? Well one lucky Sligo player won’t have to imagine that this morning as they are living this dream.

“We are asking everyone in Sligo to check those tickets and see if their raffle code is I – NBF – 65003. If that code matches the one on your EuroMillions ticket then we would ask you to sign the back of the ticket and contact our prize claims team on 1800 666 222 or email mailto:[email protected], and we will make arrangements for you to collect your prize.”