‘Sort out the dereliction!’ 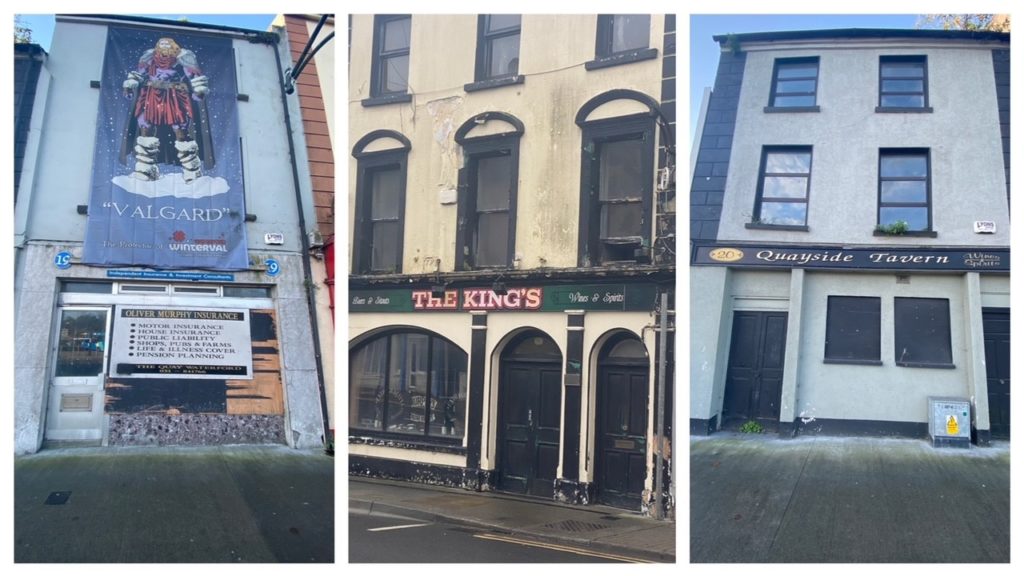 Three of the buildings mentioned by Cllr Frank Quinlan at this month’s Metropolitan Council meeting.

AT July’s meeting of the Metropolitan District, Fine Gael Councillor Frank Quinlan highlighted some derelict buildings in Waterford City that appear to have been ignored by the Council for some time.

“Some examples include 19-20 the Quay, which are an absolute disgrace,” Cllr Quinlan said. “The former King’s Pub on Lombard Street is also a disgrace, as is the former vet’s surgery on Barrack Street. I don’t know who owns these premises but it’s their responsibility to maintain them. Us as householders and homeowners have a responsibility to keep our houses clean, tidy and painted. There should be some kind of rules and regulations to make sure that these owners, and these premises follow the same principle. They are dragging down the look of the city and something needs to be done.”

Director of Services Michael Quinn said that the Council had recently completed a review of the city centre and quite a number of buildings were identified as having a need for improvement.

“Some are not quite derelict but are definitely in poor shape,” Mr Quinn said. “We’ve expanded the painting scheme that we have in the city and we reached out to a number of the businesses and premises owners that we could identify to seek their engagement on the painting scheme. Those that haven’t or won’t engage with us will become the subject of a planning enforcement. That may not address all the buildings that Cllr Quinlan raised but over the next six to 12 months we should see a notable improvement, either as part of the painting scheme or a planning enforcement action, even though that course may be slower.”