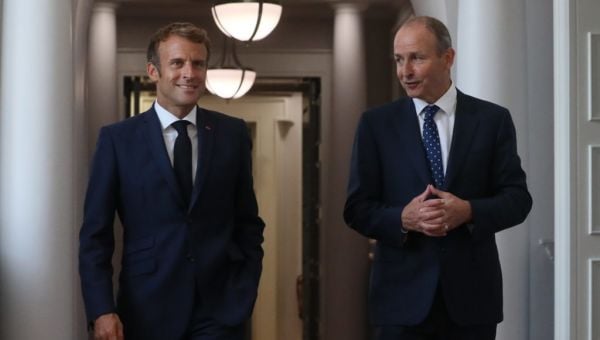 A €300 edition of Ulysses, a €180 silver frame and a €24.60 silver Celtic Spirit brooch are among the gifts given to foreign dignitaries in the lifetime of this Government.

As the Irish Examiner reports, Taoiseach Micheál Martin said that his Department has gifted foreign dignitaries nine times since June 2020, with visits having been curtailed by Covid.

Mr Martin said that he has gifted:

-A €300 Dublin Edition of Ulysses to French President Emmanuel Macron;

-A pair of Declan Killeen Newbridge cufflinks worth €79.75 and a €17.50 green Patrick Francis tie to the Prime Minister of Ukraine Denys Schmyhal;

-A €180 silver photo frame to US Congressman Richard Neal;

-A €22.75 green wool Patrick Francis scarf to the Deputy Prime Minister of Ukraine Ms Olha Stefanishyna and a €19.95 book entitled In Hinde-Sight Postcards from Ireland Past by Paul Kelly to the Premier of Western Australia Mark McGowan.

Sinn Féin’s John Brady asked a number of ministers for details of what gifts were given and received.

While many said that they did not receive gifts while travelling, Foreign Affairs Minister Simon Coveney declared a number of gifts given by visiting dignitaries.

He said: “Gifts received are token in nature, of nominal value and are typically retained within the Department of Foreign Affairs or the Private Office of the Minister in Iveagh House.”

Among the gifts given to Mr Coveney were, a commemorative plate by New Jersey governor Phil Murphy, a box of “grow your own” plants. UK Labour leader Keir Starmer, meanwhile, gave Mr Coveney a box of House of Commons mint chocolates.

While travelling, Mr Coveney was given a branded water bottle, pencil, candle and notepad by the French European Council Presidency delegation, a leather photo frame in Tehran, an ornamental vase in the shape of a cod by Massachusetts’ Governor Charlie Baker,.

He was also given an ornamental ceramic plate in Jordan and a gift box of Turkish perfume and scented facial wipes and a set of espresso cups and saucers on his visit to Turkey.