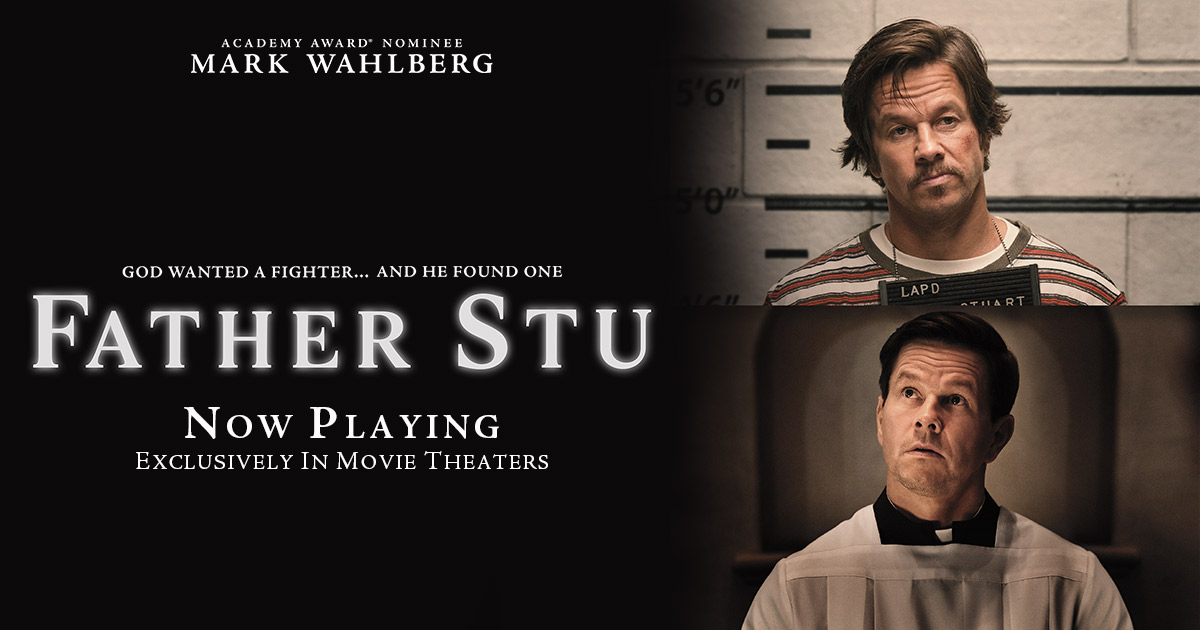 THE film, Fr Stu, was released in the U.S. in April of this year. Its release coincided with Holy Week. The film was greatly acclaimed by audiences, grossing over $21 million to date. I was on sabbatical in Berkeley, California, when it hit the big screen and I was amazed to hear cinema-goers share how much the film impacted them.

The movie chronicles the life story of Fr Stuart Long, who was ordained for the diocese of Helena in Montana. He died in 2016 aged 50. It is unusual to say the least that a priest, recently deceased, would be the subject of a Hollywood movie. The Catholic Church and the priesthood have been subjected to relentless criticism in the last few decades, the abuse scandal bringing the priesthood into disrepute and opprobrium. It is rare to see the priesthood portrayed in a positive light. Mark Wahlberg plays the lead role of Fr Stu; his father Bill is portrayed by Mel Gibson.

It is all the more remarkable because Fr Stuart Long was only ordained in 2007, aged 41. During his seminary training he was diagnosed with a degenerative muscle condition called inclusion body myositis for which there is no cure. And yet despite the fact that he was virtually paralysed, and confined to a nursing home, people flocked to him for spiritual care, comfort and healing, forgiveness and peace.

Fr. Stu’s is a remarkable story of conversion and redemption. By fully embracing the cross of suffering and pain, he grew in holiness and wisdom and ministered faithfully to the thousands who came to his room in the home. So debilitated was he nearing the end of his life, he had to be helped to lift the host during the consecration at Mass.

At the beginning of the film, we are introduced to Stuart Long, a successful amateur boxer who has won the Golden Gloves prize for the State of Montana. Even though his best boxing days are behind him, he refuses to quit despite the pleading of his long-suffering mother. However, after a particularly brutal fight, he was forced to undergo reconstructive surgery for his jaw; eventually he heeded the advice of his doctor and retired from the ring.

He is portrayed as intensely ambitious, dedicated to his sport, fiercely competitive. He is utterly sceptical about any faith; foul mouthed but with a gift of the gab and a charming personality.

He never really takes responsibility for himself and is rather naïve in his assessment of his gifts. He heads off to Hollywood hoping to make it as an actor. He takes up a job at a meat counter in a supermarket, arguing that it is one sure way of connecting with people in the film business as everyone has to shop. He comes across as a naïve cockeyed optimist with a great belief in the power of his own charm and wit. There is a recklessness about his life, overindulging in alcohol, as well as a deep seated anger, probably caused by being abandoned by an alcoholic father at an early age. He has a bond with his mum but she is a rather ineffectual figure in his life. There is also a deep, unhealed wound left by the death of his younger brother, aged seven.

A beautiful young woman of Mexican descent, named Carmen, arrives in the store one day and Stu is immediately smitten. He charms his way into her life, despite her resistance to his advances. But he discovers she is a devout Catholic and is involved in the Adult Baptism Preparation in her local parish. To win her over, Stu agrees to enrol in the programme and is baptised into the Catholic Church. His conversion is rather shallow, motivated solely by his desire for a relationship with Carmen.

They become romantically involved. He attempts to straighten out his life and give up drinking. But driving home on a motor cycle after a heavy drinking session he is seriously injured in an accident. Doctors expected him to die as he drifts in and out of consciousness.

However, he has a vision of the Virgin Mary in this semi-comatose state during which he experiences a profound call to purpose and holiness in life. He makes a miraculous recovery and slowly his life is changed, as he is determined to become the man he felt called to be in the mystical experience of Mary.

He ends the relationship with Carmen after telling her that he is discerning a call to priesthood. Needless to say his father and mother are both incredulous and try to persuade him not to enter the seminary. But he persists and begins studies for the priesthood in a seminary in Montana. However, after falling one day during a game of basketball, he is diagnosed with a rare muscular disease which will ultimately result in the progressive loss of the full use of his hands and legs.

His faith is severely challenged and he is angry at God who seems to have abandoned him even though he had committed his life to serve God in ministry. In a very powerful scene, we see Stuart pleading with God for healing but through prayer and deep faith, he is able to come to terms with his sufferings. He interprets his disease as a gift from God, mediating an invitation to share in the sufferings of Christ through which God reveals the depth of God’s love for the world. He develops a deep appreciation of the mystery of the cross.

His condition, however, so deteriorates that the rector of the seminary informs him that ordination would be impossible as he would not be capable of celebrating the sacraments. He is devastated as he leaves the seminary to be cared for by his parents. But local parishioners, including his former girlfriend Carmen, continue to lobby his native diocese of Helena to ordain him. The bishop relents and eventually he is ordained to serve in the diocese of Helena. (In real life, Stuart was ordained in 2007 at St Helena Cathedral in Montana).

Even though confined to a wheelchair, he served in two parishes in Montana. In each parish he left a deep impression on the Catholic community there. Eventually he had to be admitted to a nursing home as his condition deteriorated. But he continued to serve the people who queued outside the nursing home on a daily basis to be blessed, consoled and healed by the saintly Fr Stu.

Fr Stu came to realise that the debilitating illness he contracted was probably the best thing that ever happened to him. “It has helped me overcome my prideful ways, which were a big cross for me. It has taught me a little humility and taught me respect for others. It has helped me become the person God wanted me to become.”

A powerful testimony to faith and hope in the face of adversity.