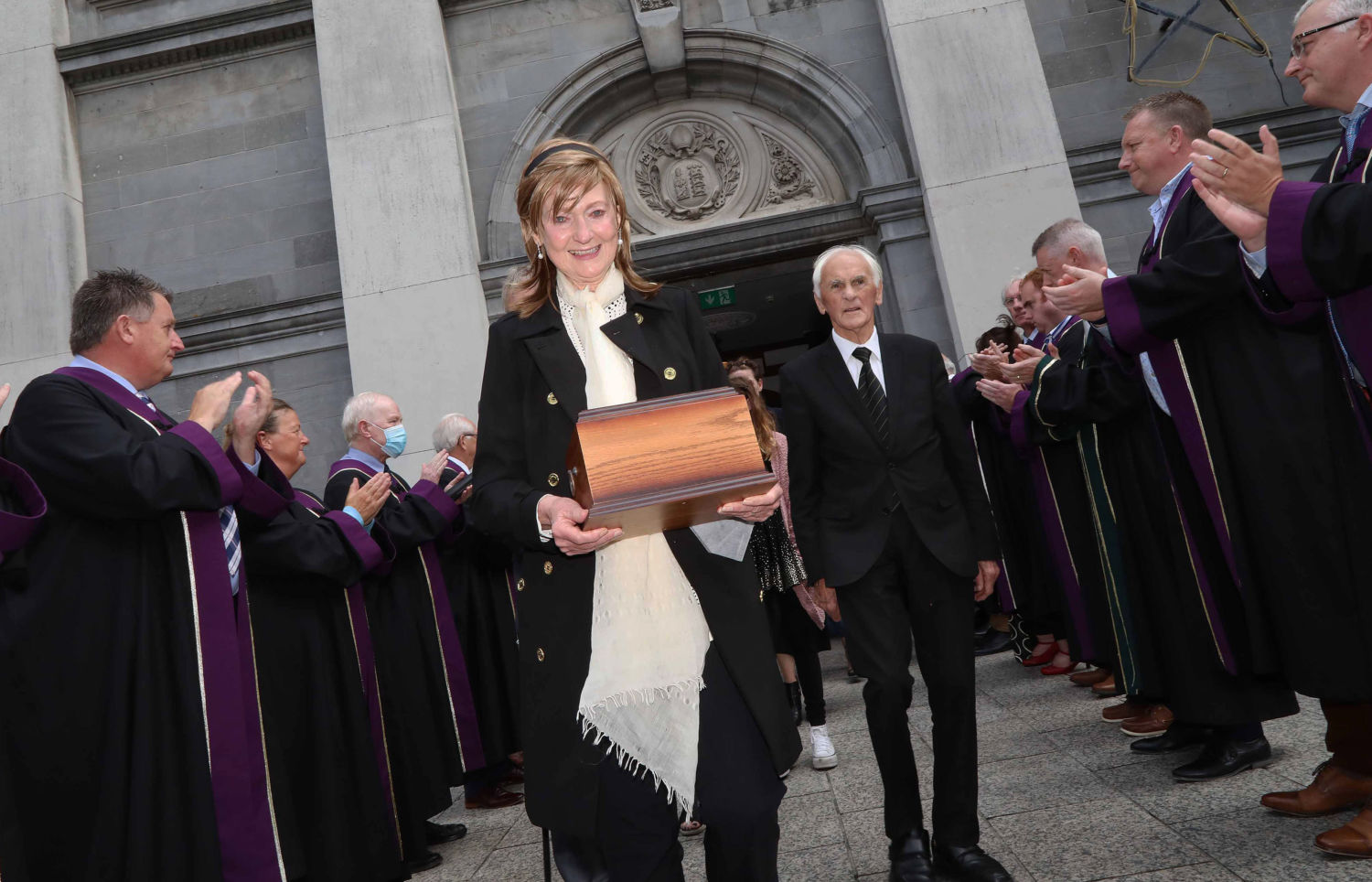 IN The Cathedral of the Most Holy Trinity on Wednesday last, August 3, Fr. Brian D’Arcy asked the congregation to close their eyes and think of packed, sweaty ballrooms, twirling skirts, the hucklebuck shoes, the mineral bar, and the fella that asked you for the last dance of the night. He catapulted those present back to the ballrooms and dance halls of the 1960s and he asked us to remember with a smile, “the never to be equalled” Brendan Bowyer, who died on May 28, 2020 in Las Vegas.

‘In attendance to remember their friend were some of the remaining members of the Royal Showband; Harry Boland, Charlie Matthews and Eddie Sullivan’

It was Brendan’s dearest wish to be brought back home to his beloved Waterford, where he was a Freeman of the City, and it was also his wish that Fr. Brian D’Arcy be present to celebrate his funeral mass. In accordance with his wishes, both took place last Wednesday in a Cathedral that was completely full of the many fans of the great showband pioneer, and Waterford’s beloved son.

Heard for the very first time was a mass setting written by Brendan Bowyer’s father, Stanley Bowyer in 1966, who was organist and choirmaster of the Cathedral in Waterford for many years. The mass was discovered by current organist, Mr. David Forde, who revised it for the modern church text and it was the first time it was sung to a congregation. While Brendan’s photograph sat at the top of the aisle, his voice soared out over the people and filled the eaves of the roof as, ‘I Walk with God’ was played.

In attendance to remember their friend were some of the remaining members of the Royal Showband; Harry Boland, Charlie Matthews and Eddie Sullivan. It was a rare treat to see all together again, and to also see the faces of musical greats such as Art Supple, Joe Mac and Tony Kenny in the pews. For one day only, Brendan Bowyer brought everyone back together again in Waterford; for one day, there was a collective memory of the heaving ballrooms and the Ireland before recording studios, television sets and media as we know it today. 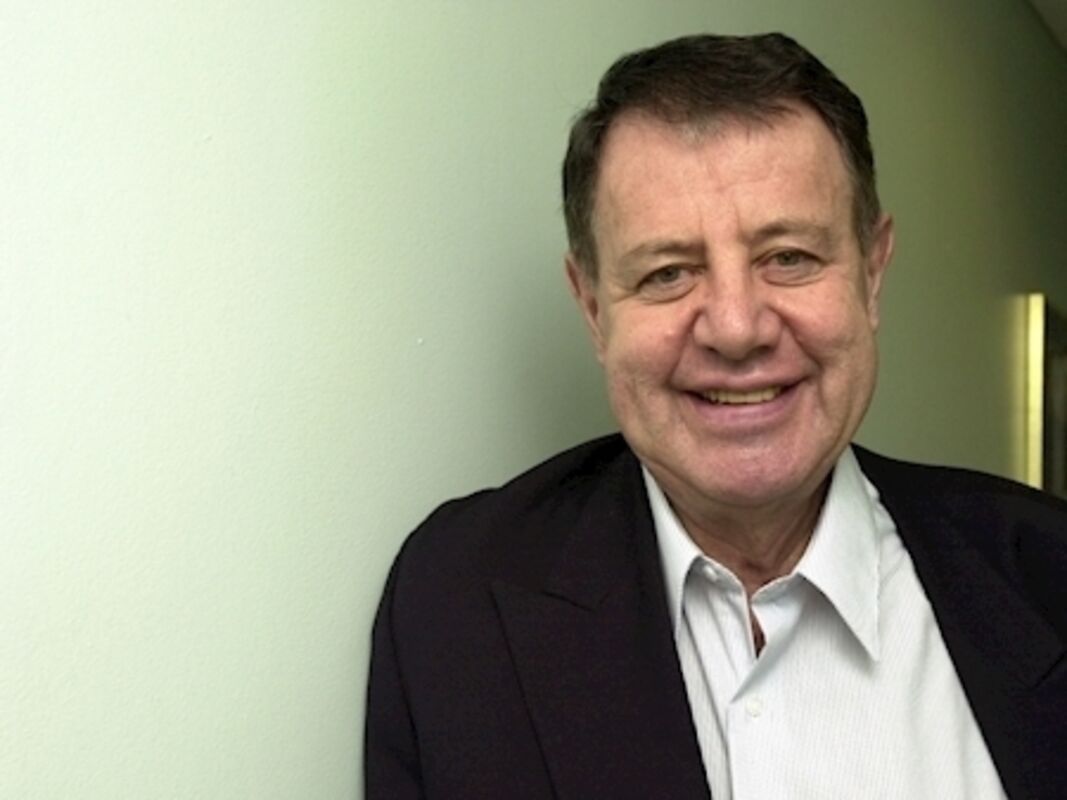 Of his 81 years, almost 60 of them were spent bringing music and joy to people all around the world, and intense pride to the people of Waterford, whom he loved dearly. Fr. D’Arcy, who knew Brendan well throughout his lifetime, said: “Brendan was a top Las Vegas star for more than 30 years, he was the first person to hold a number one song in the Irish charts, Elvis himself came to see them perform in the Royal Showband, he had 10 number one songs in Ireland, and yet he would rarely speak about any of it. We cannot let this moment pass.”

Following the service, Brendan Bowyer’s ashes were interred in the grave of his mother and father in Dunmore East. The words on the tombstone will read: “There are those who bring light so great to the world that even after they are gone, the light remains.” There really is no more fitting epitaph for the father of the legendary Showband era, the man who not only set the bar for music in Ireland, but to whom all subsequent Irish musicians owe a great debt of gratitude.

He sang the songs which brought him joy, which would lift the spirits of those listening, and he devoted his life to ensuring that the music he made brought real happiness to others – there can be no greater gift.

Fr. D’Arcy said: “When it comes to a legend like Brendan Bowyer, it would be foolish and arrogant of me to think that I could even begin to recognise the greatness of the man, or to even chart some of his successes. Brendan’s life doesn’t need me to do that, his life is so well known, so well appreciated, such an incredible life that it doesn’t need to be rehearsed or repeated all the time.” 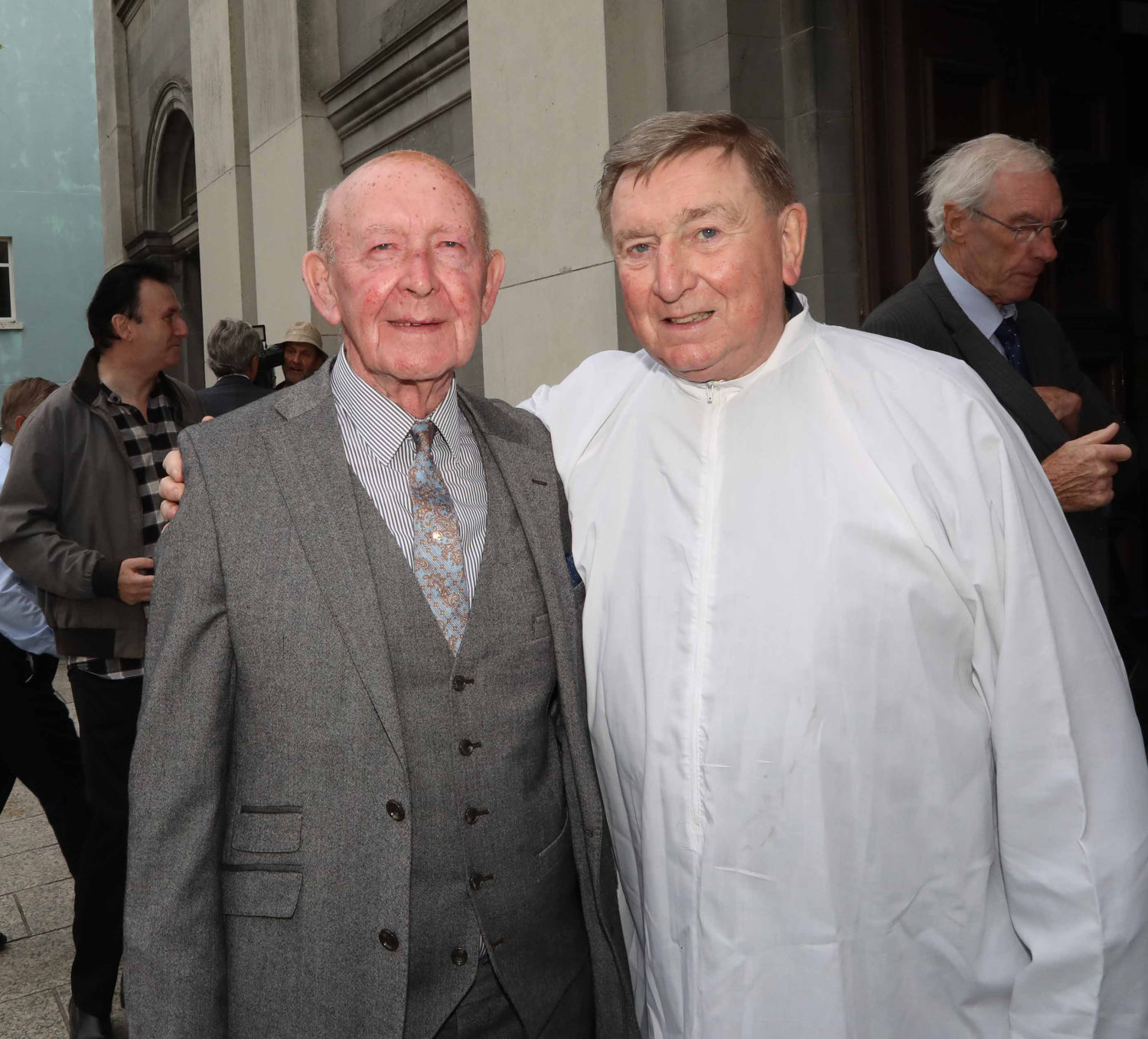 “As a 15-year-old fella, a country cub as we call them up North, I was walking home from school to catch a bus out to the middle of the country at 4 o’clock on a very autumnal, cold evening and I walked up to the town hall in Enniskillen. There was a Mercedes bus parked outside The Imperial Hotel, written in movement script was ‘The Royal Showband.’ Inside were luxurious airplane seats, the likes of which I had never seen in my life, and I went home and asked my father could my brother and I go to that dance. I went, and what I saw transformed my life, there was the Royal Showband in the Red Devil’s uniform, like nothing I had ever seen. All of a sudden, the freedom of music hit me that night, and thanks be to God, it has never left me.”

Fr. D’Arcy’s memories are echoed all over the country as venues like The Atlantic Ballroom in Tramore were teeming with fans, music-lovers and those hoping to be transformed by the movement of the hucklebuck shoes, and the charge of excitement in the air. In 1961, The Royal Showband won ‘Top Modern Dance Band’ in Britain but they carried their Waterford lineage proudly with them, having named themselves after the Theatre Royal in Waterford. Not only did Elvis use one of their songs and come to see them, but the Beatles were a support group on their tour, four young hopefuls who were advised by Brendan Bowyer to ‘stick with it and you will make it’, according to Waterford Treasures.

Crediting The Royal Showband with navigating Ireland through unchartered waters Fr. D’Arcy said: “They turned Ireland from a dark place without electricity into an industrial nation with a vision and a future. They were part of the electrification of rural Ireland, they were a part of cars coming when you could go to a dance further than your bicycle would take you. They made the first record, they went to Abbey Road in England before the Beatles did because there was nowhere here to make it. They gave us freedom, happiness, joy, a confidence in ourselves. They were the first Showband to record and all the other major stars came afterwards, inspired by what Brendan and the boys did. Within five years, there were 600 fully professional bands in Ireland after The Royal Showband started everything off.” 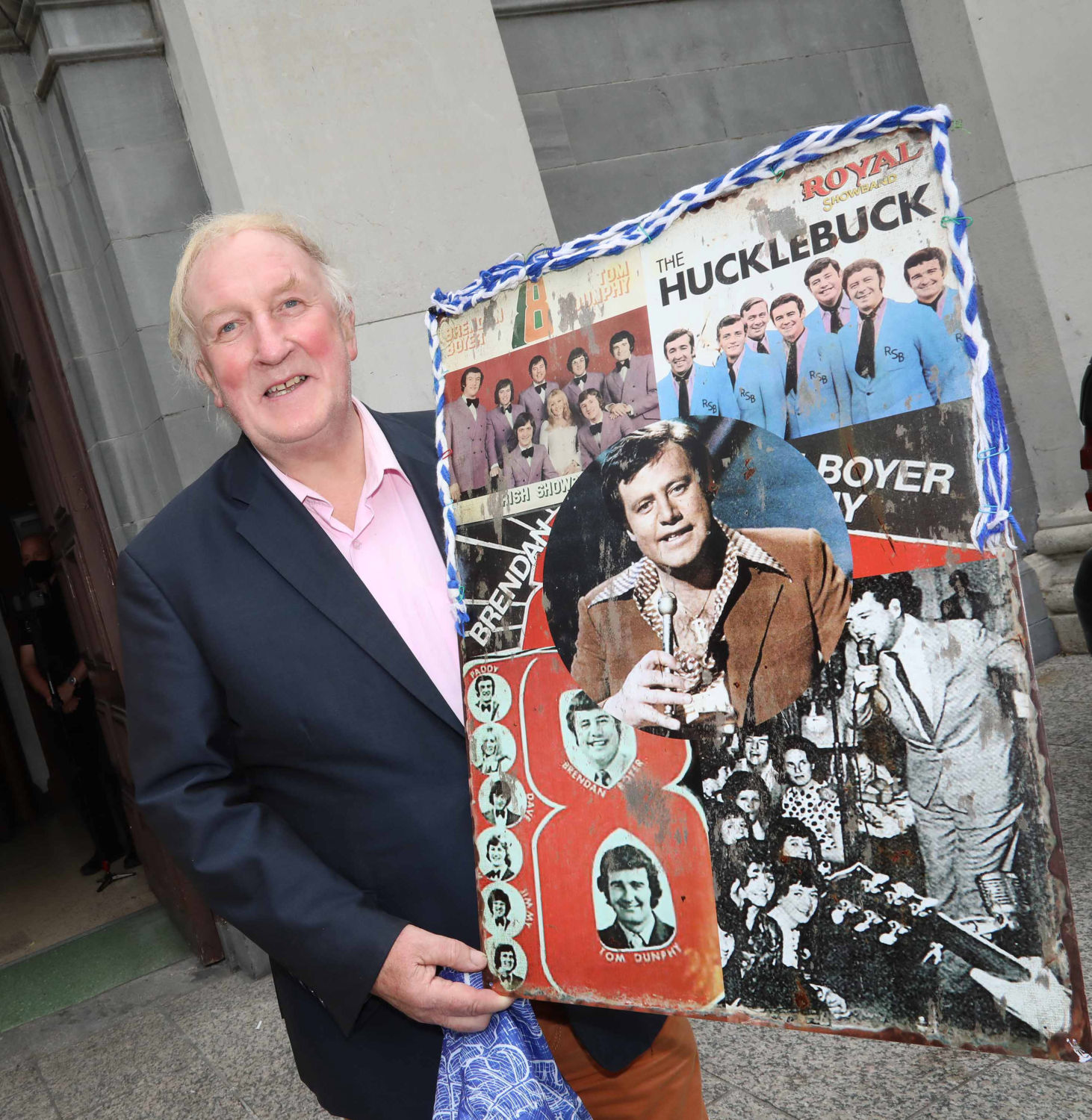 At the height of their popularity, a devastating tragedy befell them all when Tom Dunphy died in a road accident in 1975. His death was felt deeply by all members of the Royal Showband but Brendan in particular recalled that he relied on Tom, his lifelong friend, not just on stage but off the stage also. Following Tom’s death, Brendan lost himself in the numbing clutches of alcohol and in 1983, eight years later, he drank his last drink.

Celebrating 38 years of sobriety was an achievement of which Brendan was fiercely proud, and of the many, many extraordinary accomplishments in his life, this was the one which carried the most weight for him.

The hymn sung when attendees filed up to receive Holy Communion was Brendan singing ‘Going Home’ and there truly wasn’t a tearless face in the cathedral. Waterford was his home and her people were Brendan Bowyer’s people. When he earned his first chart-topper, Waterford people took to the streets in celebration; when his success reached dizzying heights, he returned home regularly to Waterford and not only did he never forget his roots, but he wore them proudly. Last Wednesday, Brendan Bowyer truly did come home, and Waterford came with outstretched hands to bring him home for that one final show.

The memorial service stopped just short of people dancing in the aisles, but there was such a sense of anticipation that you had the feeling if Fr. D’Arcy gave the go-ahead, they wouldn’t have needed to be asked twice. Fr. Eamon O’Driscoll, who knew Brendan from his time in Waterford, travelled back from Killarney to be part of the mass, while soprano Caroline Reid-O’Brien also sang at the funeral, a special request of Brendan’s. A guard of honour was formed by robed members of Waterford City and County Council, including CEO Michael Walsh, Mayor John O’Leary and members of the Council. Mourners came from all corners of Ireland to remember ‘a hero’, but rather than sit maudlin and grief-stricken, they stepped back into the familiar dance halls where dreams seemed within reach, when Brendan Bowyer smiled that dazzling smile and leapt into the air, microphone in hand.

The late poet Brendan Kennelly’s famous work, ‘I See You Dancing, Father’, was recalled at the close of the ceremony because in the same way that Kennelly chose to keep his father alive in memory, so, too, was Brendan Bowyer alive in the Cathedral, evoked by the tangible memories flooding the building. Hucklebuck may not have been played during the ceremony, but I’ll bet it was played in every house in Waterford that night, and for one night the kitchen melted away to become the sweaty ballroom, heaving with excitement and happiness.

Brendan Bowyer was a lucky man in so many ways, but mostly because he was loved immensely by his family who knew they had to share him with the world. He is loved and sadly missed by his beloved wife Stella, his children Brendan Jnr, Aisling and Clodagh, his grandchildren Liam and Nora, his sisters Olive, Pat and Alison, Stella’s brothers Michael, John and Gerard, extended family, relatives, neighbours and all his friends in Waterford, the United States and all over the world.

Reflecting on the man her husband was, Stella Bowyer said: “Brendan had a profound influence on my life from when I first met him in 1964. We were together for 56 years, he had a self-deprecating sense of humour and never took himself seriously. His reaction to life’s challenges was amazing, he seldom took things personally, he was a wonderful travelling companion, an avid reader, a sports fanatic, he loved opera and, most of all, he was a loving father, a husband, a brother, a grandfather, an entertainer, a man, a friend who will never be forgotten.”

“There are those who bring light so great to the world that even after they are gone, the light remains.” 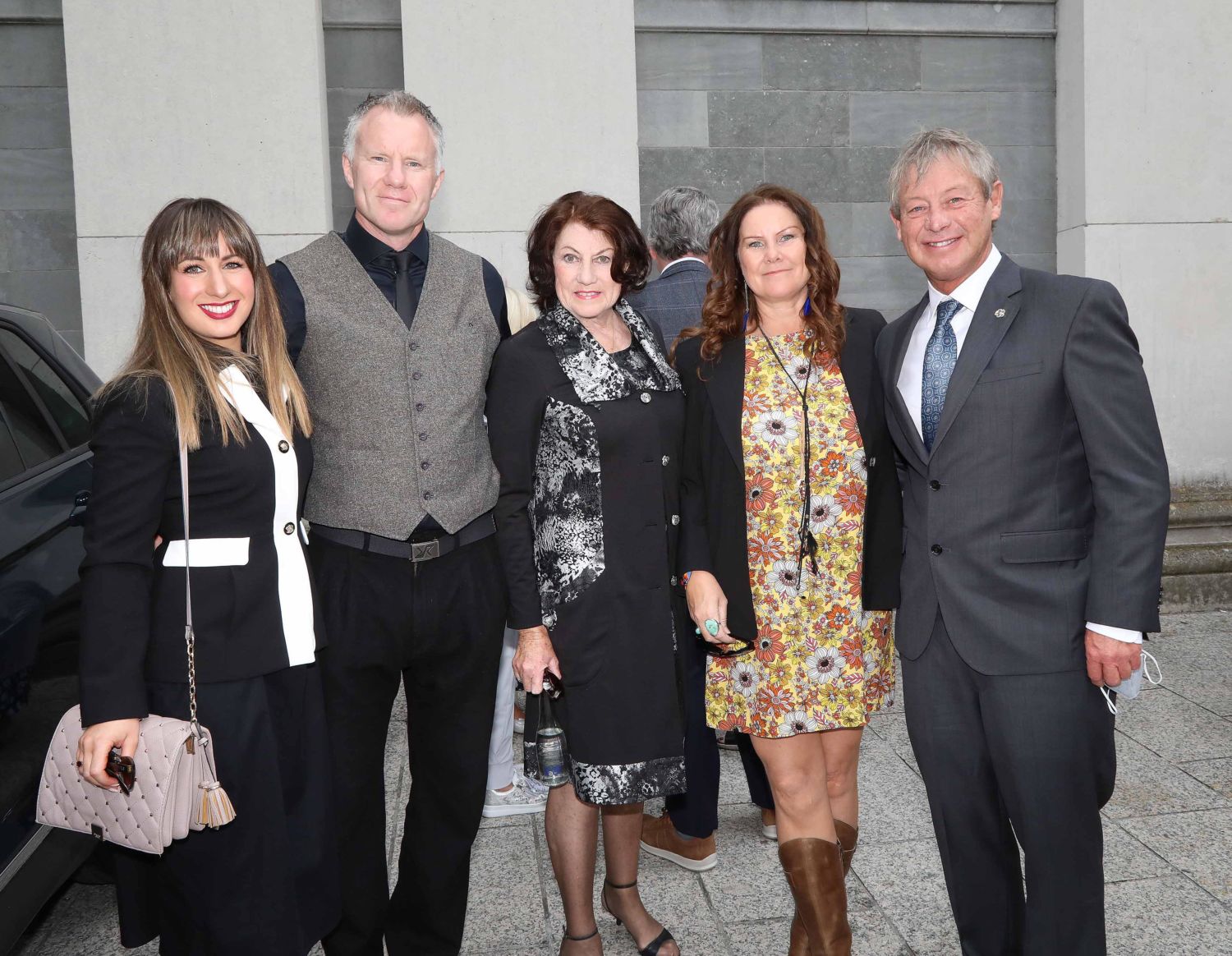