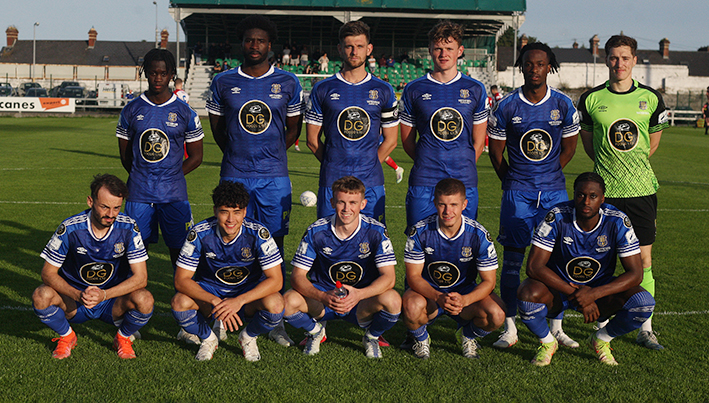 The Waterford FC team that defeated Treaty United in Limerick on Friday night, including debutant Dean Larkin (third from the right, back row). Photo: Paul Elliott.

From humble beginnings as a young lad with Tramore AFC that yielded him the Waterford News & Star U-11 Schoolboy player of the year accolade saw Dean Larkin reach new heights at the Markets Field on Friday last as the midfielder played the full game as Waterford FC beat Treaty United in the SSE Airtricity First Division.
The younger brother of former Blues player Jack, who has since moved to America with another former Blue Darryl Walsh in the past week, produced a solid performance in the midfield three as the Blues bounced back to winning ways in the league after the brilliant cup win against St. Patrick’s Athletic the previous weekend.
Speaking after the game to the Waterford News & Star, “I feel delighted to be honest with you to play a full 90 minutes – a long 90 minutes at that. It was tough going near the end of the game, but it’s great to be playing, and to win tops it off.
“I was cramping a little bit near the end, but I’m thrilled to be part of the first-team, and to get my first full game under my belt is brilliant. It was a great win for us against a Treaty team that made life difficult for us during the game.
“I suppose the focus for me going into the game was to try keep things nice and simple in the middle of the park alongside Niall (O’Keeffe) and Shane (Griffin). The fact that the manager and the coaching staff trusted me to start a game of such importance was a big boost.
“I was just trying to do the simple things right from the start, and I thought that I grew into the game. I nearly got a goal as well from Kilian’s cross, but there was no real pace on the cross. I did manage to get a header on it, and thankfully Darragh was on hand to fire the ball to the net.”

A NIGHT TO TREASURE
“Tonight means a lot to me personally to play a full game for Waterford. I have been in the club since 2017 when Fran (Rockett) brought with me into the Under 15s. I’ve been progressing slowly through the Under 17s and 19s so to get the chance for the first-team is fantastic. I’m delighted to get the chance, and to win is better.
“I’ve been growing into myself and my body the last while, and I’m getting more positive, which is a big thing for any young player. Both Shane and Niall were brilliant to me. They talked me through the game, and they are so good to me. They know their jobs well, and it helped me to composed as well when I was in there.
“The big thing that I’ve taken from my time with the first-team to date is just looking at them, and how they train. They have taught me a lot. I think the big thing I’ve learned is to give Phoenix and Junior the ball to let them do their thing.
“It means a lot here at the minute. To play for Waterford, and to win. To see my mother and father here tonight makes me so happy because they’ve done so much for me in my career to date. I’m looking forward to continue to challenge to remain in the team.” 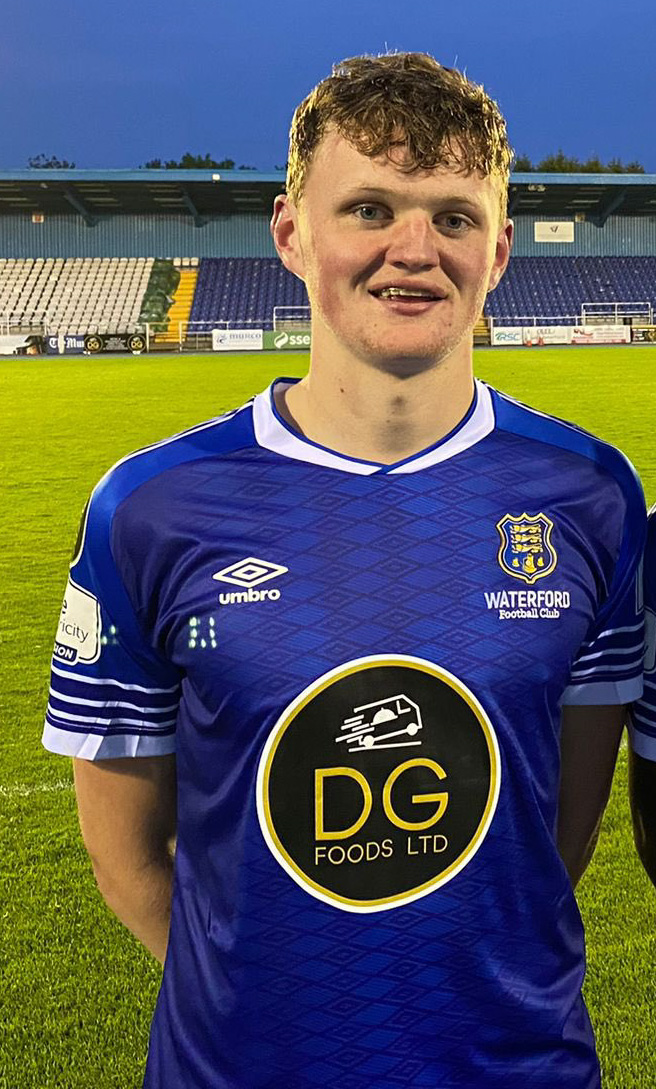 Dean Larkin made his first senior start for the Blues on Friday night.