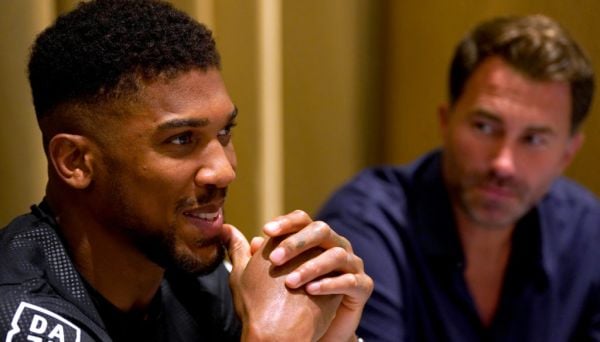 Anthony Joshua is thriving on his underdog status heading into Saturday’s heavyweight rematch with Oleksandr Usyk, according to his promoter Eddie Hearn.

Joshua is seeking to defy the odds by reclaiming the WBA, IBF and WBO belts he surrendered to the Ukrainian pound-for-pound contender at the Tottenham Hotspur Stadium last year.

Although the conclusive points defeat was a shattering setback, Hearn believes Joshua has benefited from having a heavy burden lifted from his shoulders.

“The pressure’s off,” Hearn told the PA news agency. “I know he must win, but now he’s the underdog and people aren’t expecting him to win.

“He’s had to carry British boxing on his shoulders for years and years and that pressure has got to him. It’s arduous.

“People see this guy with belts, fame and money and just presume that’s a great life. But on the other foot, he’s also a young man who just wants to chill out and play football with his mates in the park, go for a coffee and do all these normal things he’s not able to do.

“It may not be as pleasing, exciting or entertaining, or provide as much happiness, as you might think. And he’s felt a lot of that pressure over the years because it’s a bubble he lives in.”

Joshua has spent over a month in Jeddah finalising preparations for ‘Rage on the Red Sea’, acclimatising to a city where the daily temperature hits the late thirties and where he is largely able to move unnoticed.

“Being out here for four weeks has been good for him – he’s been able to go to the mall, have a coffee, go for a stroll through the hotel without everyone jumping on him for photos and interviews,” Hearn said.

“Let him go out and do his thing. It’s all about hindsight. He thought it might be over but really he’s just getting started. He’s been an unbelievable ambassador for British boxing and there’s a long way to go yet in the AJ story.

“I’ve heard a lot of people say his career’s on the line and he’s fighting the pound-for-pound number one in the sport. It’s also going to be a very, very tough fight.

“That’s the mentality he should have this week – smash and grab. For years he’s been parading around as the A side, filling stadiums.

“It was almost that people didn’t care who AJ fought. Now let’s be the B side, come in on the blindside and smash this guy up and take the belts home.”

Usyk is having to cope with an entirely different type of pressure as he looks to deliver a morale-boosting victory to a nation that is at war with Russia.

The 35-year-old former undisputed cruiserweight has been given dispensation by the Ukrainian military to leave Ukraine and fight Joshua knowing the feel-good factor it could generate in a country that is under siege.

“Oleksandr is a professional and he has to deal with the circumstances and accept them,” Usyk’s promoter Alexander Krassyuk told PA.

“Of course it’s not pleasant, of course he does everything to support the people back home and motivate them.

“He’s always fighting for Ukraine, but now it’s something special. He was blessed for this rematch by high-ranking military officers because everyone wants the Ukrainian flag to rise, for the Ukrainian anthem to be heard. That’s why he’s here.”