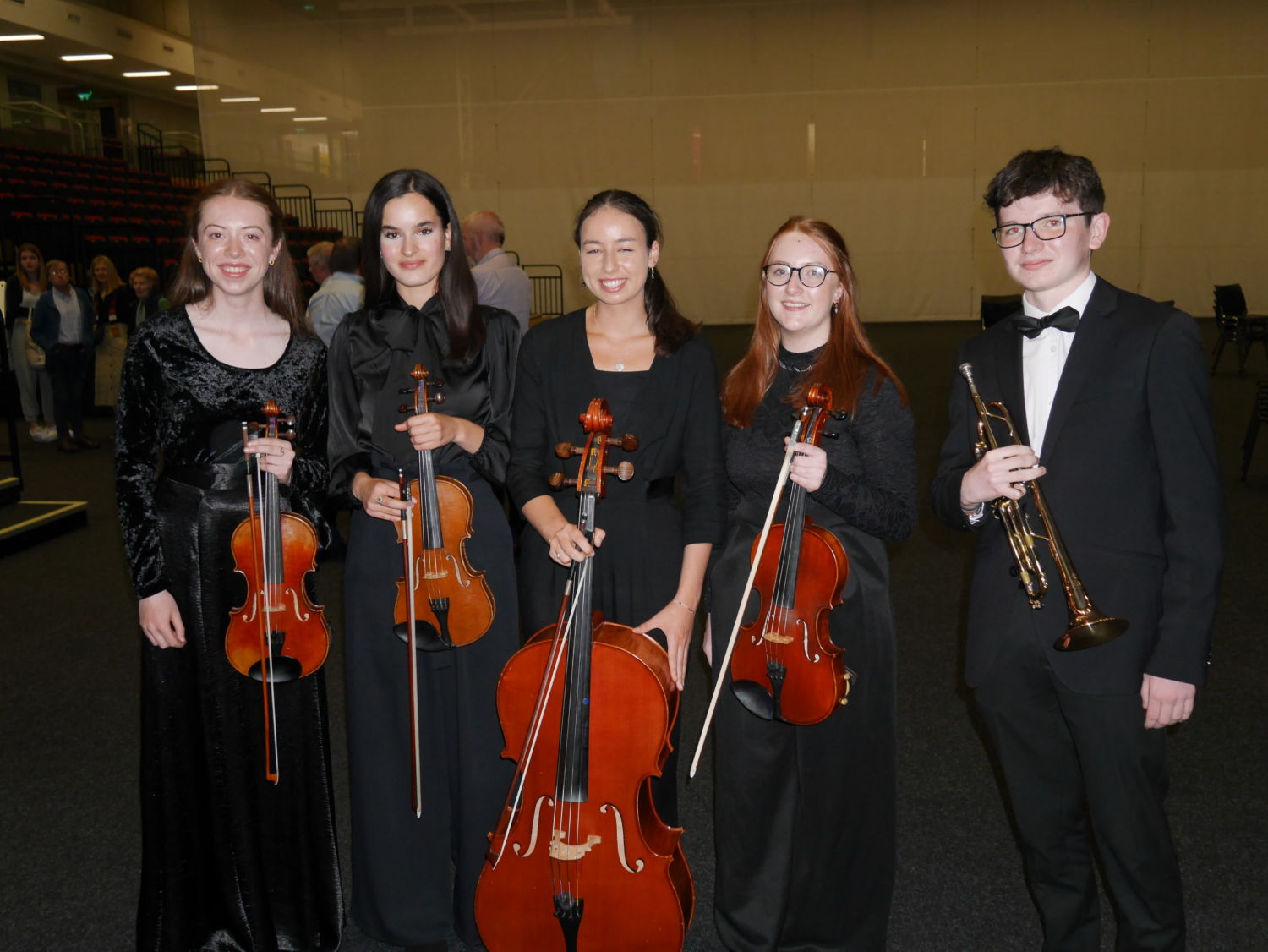 IT’S the sea of confident young, faces that strikes you first and the smiles that are everywhere. The NYOI are in town for what will be a busy, bustling, big-band ballyhoo of a concert. 107 of the finest young classical musicians in the country. Assured, talented, dynamic with a sound that would awaken a deaf man in a coma on Ballybricken. And the confidence to blast it out.

There’s no one on board that hasn’t got years of classical training and whose parents haven’t made many sacrifices to get them to this stage. The NYOI has three core values: to provide an opportunity for young Irish musicians to engage with music professionals; to promote equal access and overcome financial and geographical barriers encountered by young Irish musicians and to promote classical music to audiences and communities at home and abroad. Watching this sea of young talent tonight fills me with pride because it’s not so long since it was virtually impossible to find music teachers of sufficient standard to pass on their knowledge.

‘Tonight is Gearóid’s swansong after conducting the NYOI since its inception back in 1980. That’s 42 years at the podium’

The SETU School of Music has played no small role over the years in training young musicians and has supplied superb players to this orchestra. And this year, we’ve got five and the Music School – not to mention parents and grandparents – are only dead chuffed. And why wouldn’t they be with four strings and a trumpet on board tonight?

Violinist Fódhla Dunne is a veteran! She’s been a member of the NYOI since January 2018 and has also played with the WIT Budding Bows, WIT Concert Strings and the Dublin Youth Orchestra. Nataliya O’Neill is also in the violin section. She is leader of the SETU Music School Concert Strings & SETU Orchestra for the last number of years. Nataliya is currently leader of the Dublin Youth Symphony Orchestra and was recently a prize winner of the 2022 Feis Ceoil national music competition. Violist Moya Glynn is both a member of the National Youth Orchestra of Ireland and the Ulster Youth Orchestra since 2022. She has always been an active student at the music school and has performed in the school’s various orchestral and choral groups. Déise cellist Sophie Kirby is also here. As well as being a member of the National Youth Orchestra of Ireland since 2022, Sophie is also a member of the Ulster Youth Orchestra and has been a soloist with the SETU Budding Bows and Concert Strings and the wider SETU Orchestra for several years now. 15-year-old Adam Mernin is also here. He’s been winning awards at the Kilkenny Music Festival, Arklow Music Festival, Irish Association of Brass and Concert Bands, Waterford City Massed Band, South of Ireland Band Championships and most recently the Feis Ceoil Dublin 2022. Adam was awarded the Ted & Mary O’Regan Bursary in July 2022 and has been invited to perform in the John Field room at the NCH in September as part of the Feis Ceoil 125 years celebration as a Rosebowl winner. Now there’s something to blow your trumpet about.

The programme is a mix of popular and well-known pieces along with the high-end classical score of a Tchaikovsky symphony that closes off the concert. The blasting brass of Sibelius’s tone poem “Finlandia” –  a powerful 1899 protest against increasing censorship from the Russian Empire – seems particularly apt given the current invasion of the Ukraine by Russia.

NYOI leader Claire O’Connor, from Dublin, is the superb soloist for the Lalo “Symphanie Espagnole”. The work was written in 1874 for violinist Pablo Sarasate, and premiered in Paris on February 7, 1875. It’s a real show-off piece for violin and Claire captures all the melodrama and passion that we expect from Spanish music. The opening notes of the Mozart Bassoon Concerto played by NYOI’s Carl Roewer, from Limerick, reminds me of just how popular this piece is. Carl’s playing is graceful and wistful with Mozart’s themes floating over the whole orchestration and his finale solo is a delight. Kildare’s Leo Brychta has been with the NYOI since 2015 and his Hayden Trumpet Concerto is such a busy and joyful piece that lifts the spirits. Playful rippling notes along with dreamy, recurrent solo intervals and a big finale are all big-hit features of Leo’s playing.

Leroy Anderson’s “Irish Suite” has us all bouncing in our seats and foot-tapping along to a suite that opens with a jig “The Irish Washerwoman” and the “Rakes of Mallow” that is a riot of colour. Turbulent times are evoked with sections from the Minstrel Boy and “The girl I left behind me”, “The wearing of the green” and “The last rose of summer” that remembers loss and sacrifice and friends that fell on the battlefield, which reminds me of Chesteron’s famous quatrain:

“The good Gaels of Ireland,

The men that God made mad;

For all their wars were merry

And all their songs were sad.”

There’s always an air of razzamatazz about NYOI concerts. Largely due to dynamic conductor Gearóid Grant, who demands, cajoles, points, elbows, dances, hops and leaps on his podium while the beaming smiles that float around the orchestra speak of the joy and wonder that playing brings.

Tonight is Gearóid’s swansong after conducting the NYOI since its inception back in 1980. That’s 42 years at the podium along with stints as conductor with the RTE Orchestras, the Ulster Orchestra and the Irish Chamber Orchestra. Gearóid has also devised the Irish Times series of “Music in the Classroom”, which introduces some 30,000 Irish schoolchildren each year to classical music.

Thanks for the music, Gearóid.