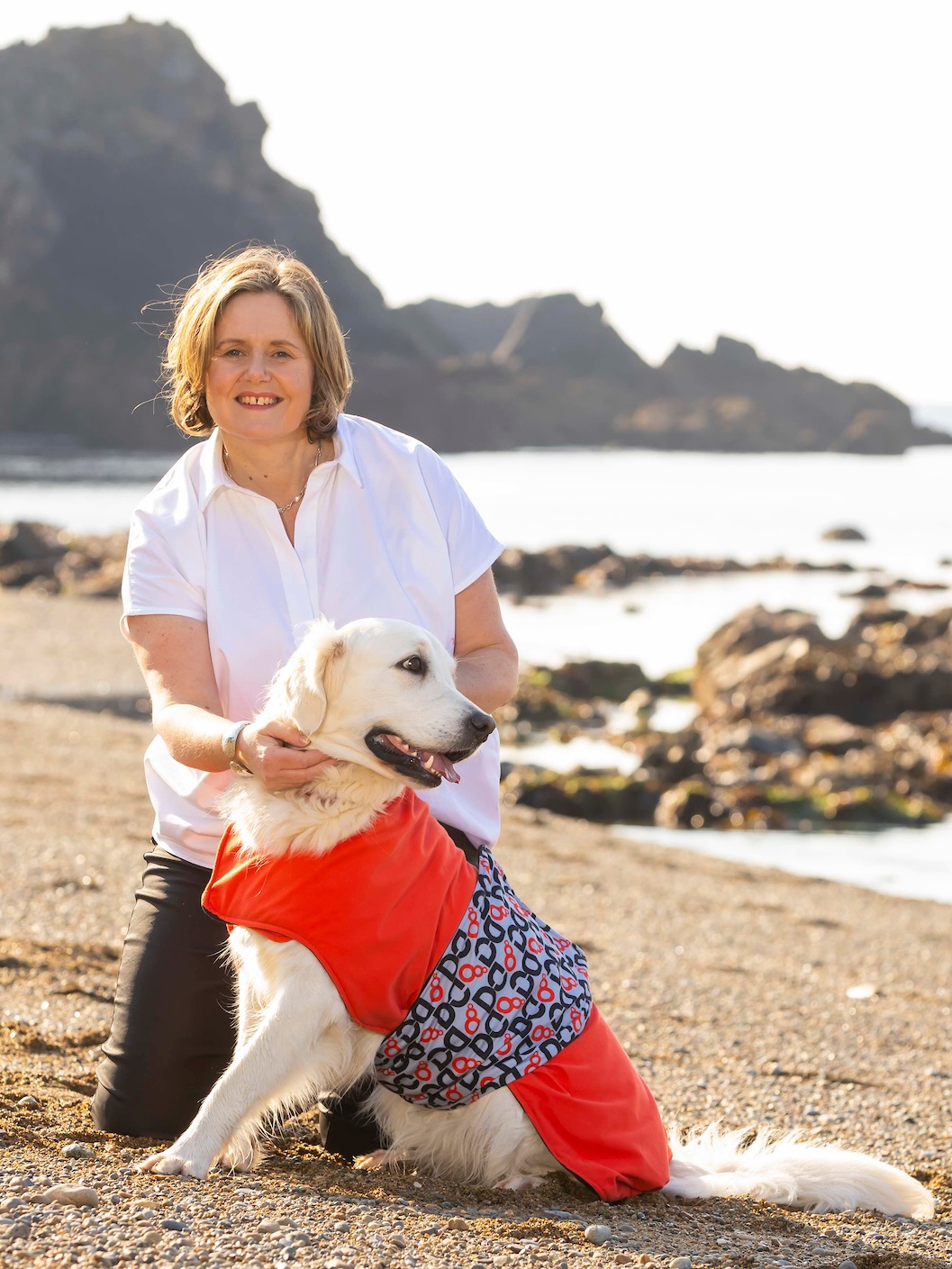 Crooke resident and DogDry founder Frances O’Reilly and her golden retriever Luna, sporting the first of a kind product.

THE Waterford-based founder of a brand new absorbent drying coat for wet dogs is hoping her new product will prove just the right fit for four legged friends throughout Ireland and the UK.

Speaking to the Waterford News & Star at Woodstown Beach while her golden retriever Luna was enjoying herself in a nearby stream, Frances O’Reilly explained the inspiration behind ‘DogDry’.

“It’s all down to Luna,” the Crooke resident said. “She just has an instinct for water; she always seems to find it! It’s bone dry here on the beach today and look where she’s happiest, there in the wet patch. She’s so happy when she’s near water, it’s her instinct so we couldn’t let her not do it either and just have her walking to heel on the beach. But having fun the way she does makes an awful mess, which I’ve been cleaning up all the time with towels between the car and when we get home. I had a little bit of time on my hands during lockdown and I thought I’d do something about it.”

‘DogDry’, the end result of Frances’s lockdown efforts, was delivered after considerable trial and error followed by quantitative research of a representative sample of Irish dog owners.

“I tried to describe what it was in terms of what I thought was the ideal product and then I did proper market research with an agency to establish if others considered what I believed was a good idea in similar terms – good enough to the point where they’d actually buy it. And I got a really strong result from that research, with 65 per cent of dog owners in the country declaring their interest in buying a DogDry. That research also made clear to me what was important to dog owners, the importance of the dog being able to move freely while wearing it. So, of course it had to dry the dog but it couldn’t compromise on the dog’s mobility.”

Frances, who had worked in innovation for major brands including Diageo and Kellogg, then brought fashion designer and Atlantic Technological University lecturer Sharon Maxwell on board “as she knows how clothes are cut. We all know how a well-cut shirt and suit doesn’t compromise on your movement so Sharon’s job was to develop different cuts for the coat. So over lockdown, we put together videos of different dogs wearing different shaped coats in which they were rolling over, lying down, jumping and so on. My brother has springer spaniels that are outdoor dogs so they were very much the test models – if the outdoor dogs didn’t mind wearing them, then any dog would be fine wearing them. And once we’d achieved that goal, things moved from there.”

The product itself, the first of its kind in both Ireland and the UK, is made from comfortable performance fabrics, similar to what’s used in super absorbent reusable nappies. Its soft bottom layer wicks away moisture and odour. The absorbent middle layer then locks the moisture away from the dog’s body, while the waterproof top layer keeps the mess within the coat and out of the owner’s car and home.

“The dog won’t be cold and it starts to dry them as soon as you put it on,” Frances explained. “For a full-haired dog like Luna after a full plunge into the sea, it might take about 15 minutes but a short-haired dog would dry much more quickly. The coats are really adjustable so you can make it nice and snug on any shape of dog and as we know, dogs come in all shapes and sizes – and it works. Every dog has the right to play outdoors and DogDry takes care of the mess: no more damp patches on the back seat of your car!”

“There’s nothing like this in Ireland or the UK and I don’t think there’s anything like it in Europe either,” she added. “And that makes things hugely exciting. In Britain, there’s about six million households with dogs, in Germany it’s between eight and nine million and in the United States, there’s 36 million households with dogs. Every dog gets wet at some stage! For me, it’s very much about dogs not being allowed to be dogs. I like that dogs get to live indoors with their families but they still need to be allowed to do what comes naturally to them – sniff, roll over and splash. And if you bring them out, and they get wet and then you put on their DogDry, owner and dog alike win, and I really like the sound of that!”

DogDry, which comes in five sizes (from extra small to extra-large) is available online from €79 at www.DogDry.com 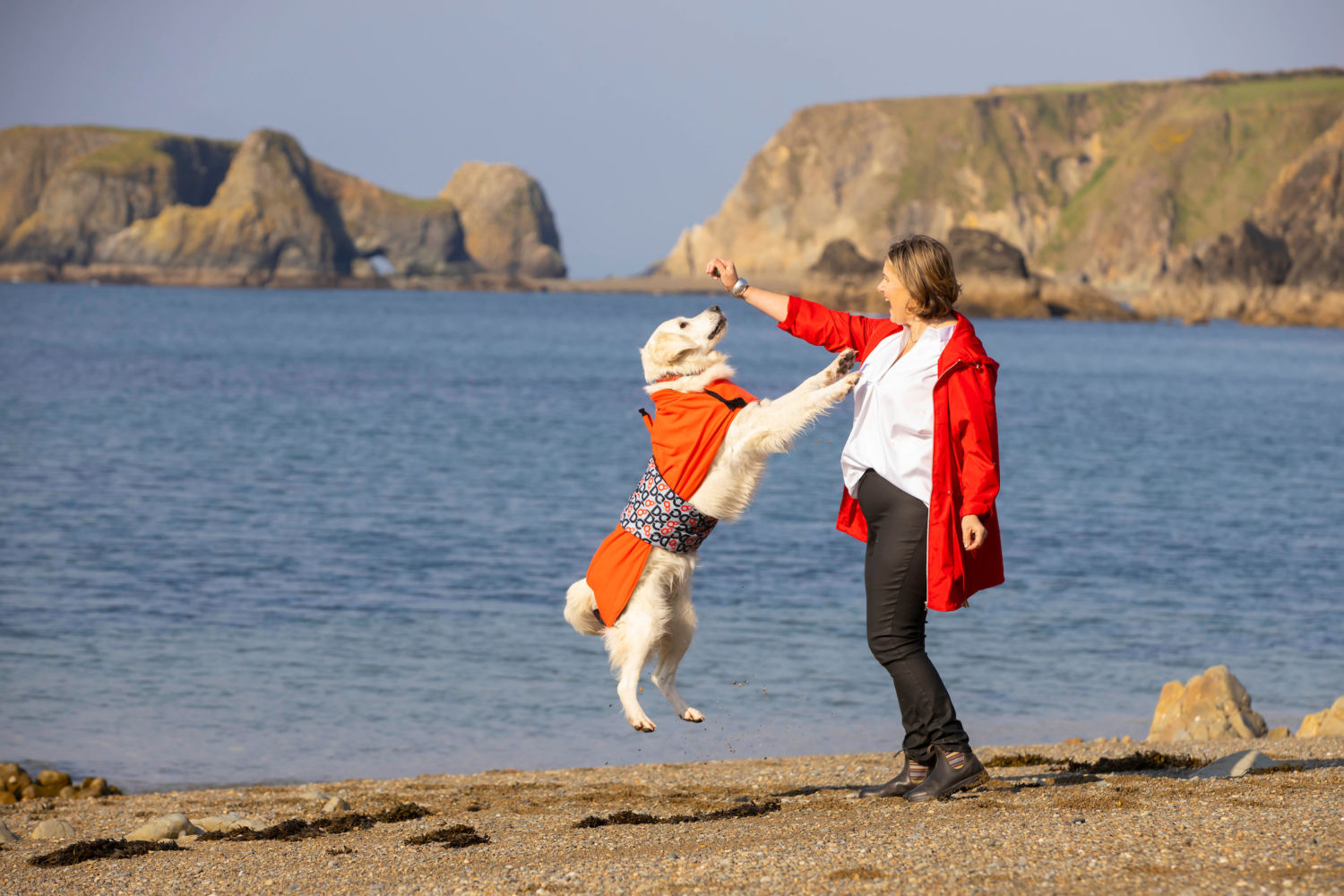 “Every dog, everywhere, has the right to play outdoors,” said Frances.