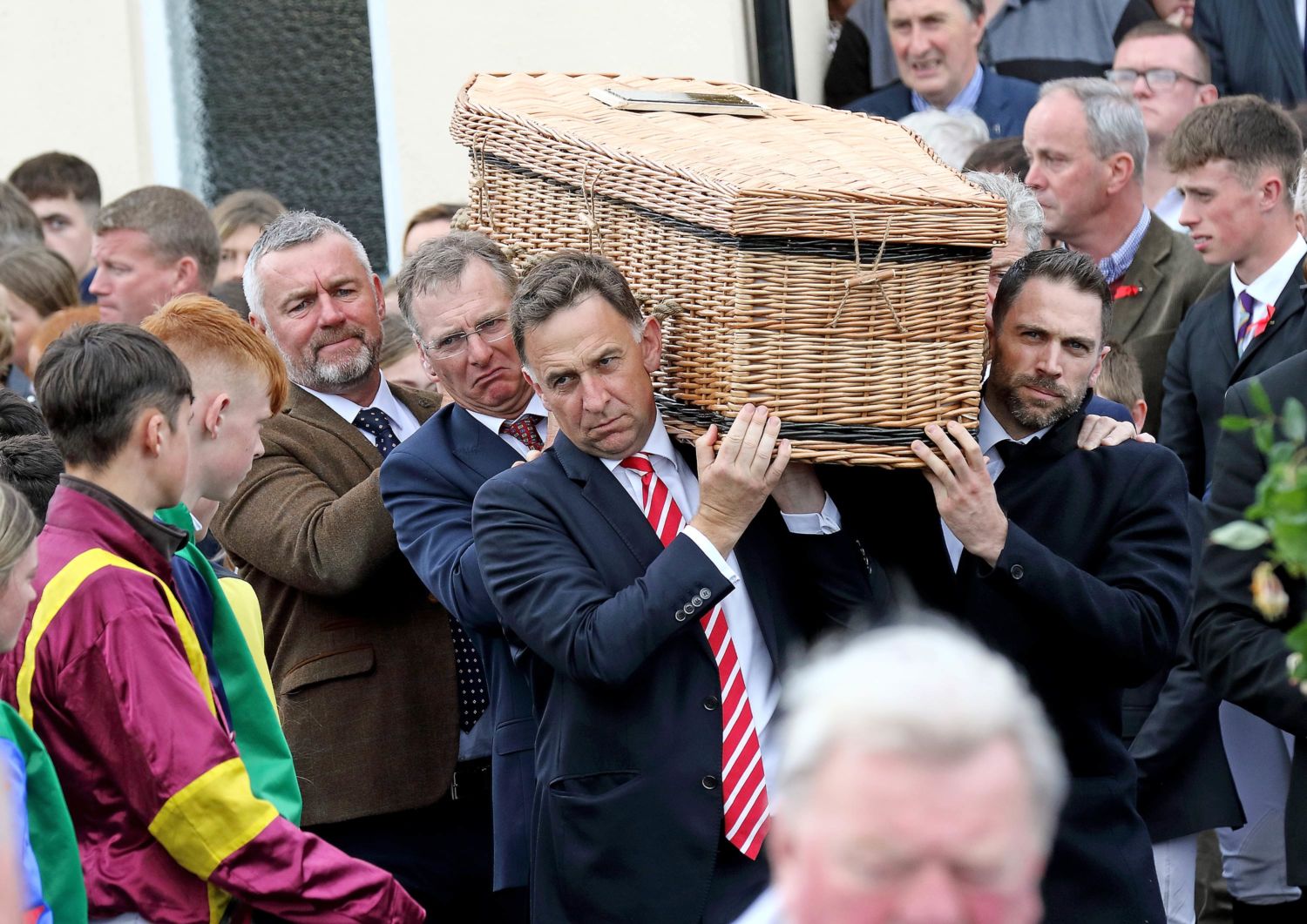 DARK clouds lingered over the grief-stricken horse racing and local community at the Church of the Nativity of the Blessed Mary, Butlerstown, as they gathered for the funeral of young Waterford jockey Jack de Bromhead – the son of esteemed trainer Henry and Heather.

The 13-year-old talented rider died tragically at Rossbeigh Beach in West Kerry after a fall from his horse in the fifth race of day one of the Glenbeigh Racing Festival on Saturday. From early morning hundreds of young Jack’s friends lined the route to the church and outside his former school at Scoil Mhuire, Butlerstown.

As the skies above opened with a downpour, three tractors led the funeral procession, with the hearse flanked by stable staff of the de Bromhead’s, up the narrow road where many of his friends from pony and show jumping worlds decked in their silks lined the entrance to the church.

An array of talent from the sport of Kings were led by Henry’s stable jockey Rachael Blackmore, who was joined by racing personalities, including Robbie Power, Davy Russell, Charlie Swan, Brian Gleeson, Ed Chamberlain, Ralph Beckett, and many more.

Members of the school communities of Scoil Mhuire, Newtown and Kilkenny College were also present with Butlerstown GAA Club and Waterpark Rugby Club standing in unison to pay their respects to a much-loved and respected young lad.

Jack’s short life was remembered with symbols that included his riding whip, goggles, a rugby ball, a Ralph Lauren togs, his Grandpa’s hunting horn, and Nike runners. President Michael D. Higgins was represented at the Mass by his aide-de-camp, Stephen Howard, while Stephen McOwen represented An Taoiseach Micheal Martin. 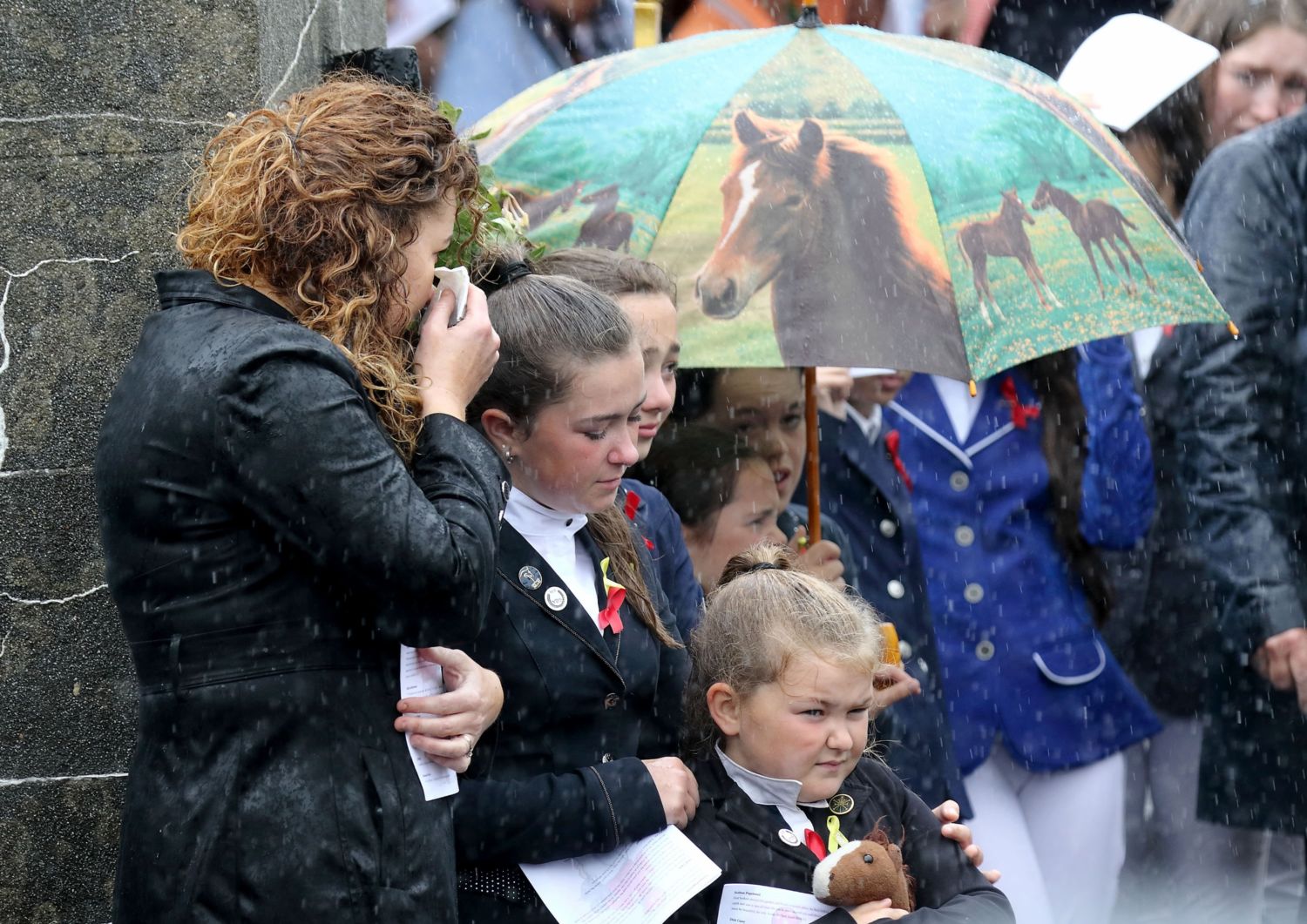 Mourners of the pony and showjumping world pictured prior to Jack’s funeral Mass.

‘CAPTURED THE HEARTS OF A NATION’

In his homily, chief celebrant Monsignor Pat Fitzgerald, parish priest of St. Paul’s and Butlerstown, who was joined by Fr. John Delaney, Fr. Denis Hooper and Fr. Pat Crean of Kerry, said that Jack’s death was both “unthinkable” and one that has “captured the hearts of a nation”.

“We’re together now, and we’re gathered to celebrate the life of a young boy, who has captured the hearts of not just a parish but of a nation, and far beyond. We are joining a family which has scaled the heights of jubilation and they brought us with them.

“We share with Henry, Heather, Mia and Georgia, their immense burden of grief and sadness. Truly Jack’s tragic passing has touched the hearts of friend and stranger across the country, and particularly so, in the racing community.”

Fr. Fitzgerald continued: “Jack was full of the joy of living. He revelled in the life and opportunities that surrounded him – in his home, on the farm, in the stables, and in the community. He loved the tractor, the cattle, the ponies, and the horses. He was quite the expert – maybe a budding whisperer.

“But most of all he flourished in his family, with his parents and sisters, who were the bedrock of his happiness. He loved race riding, rugby, Gaelic, swimming, diving, and driving, off the road of course. Every day was for him a joyous adventure in living.

“The all-embracing experience of his life can be expressed in one word – “love”. A love received and given. He knew himself to be loved and he reciprocated in a multitude of ways. The kind of completeness and perfection to this life. Jack was to so many a ‘Little Prince’.”

His twin sister Mia described him as “the best brother ever. I got so lucky when you were born with me”, while his younger sister Georgia said that Jack was the “kindest, bravest and caring big brother that I could ask for. He was never scared to stand up for people and was always there for you no matter what.” 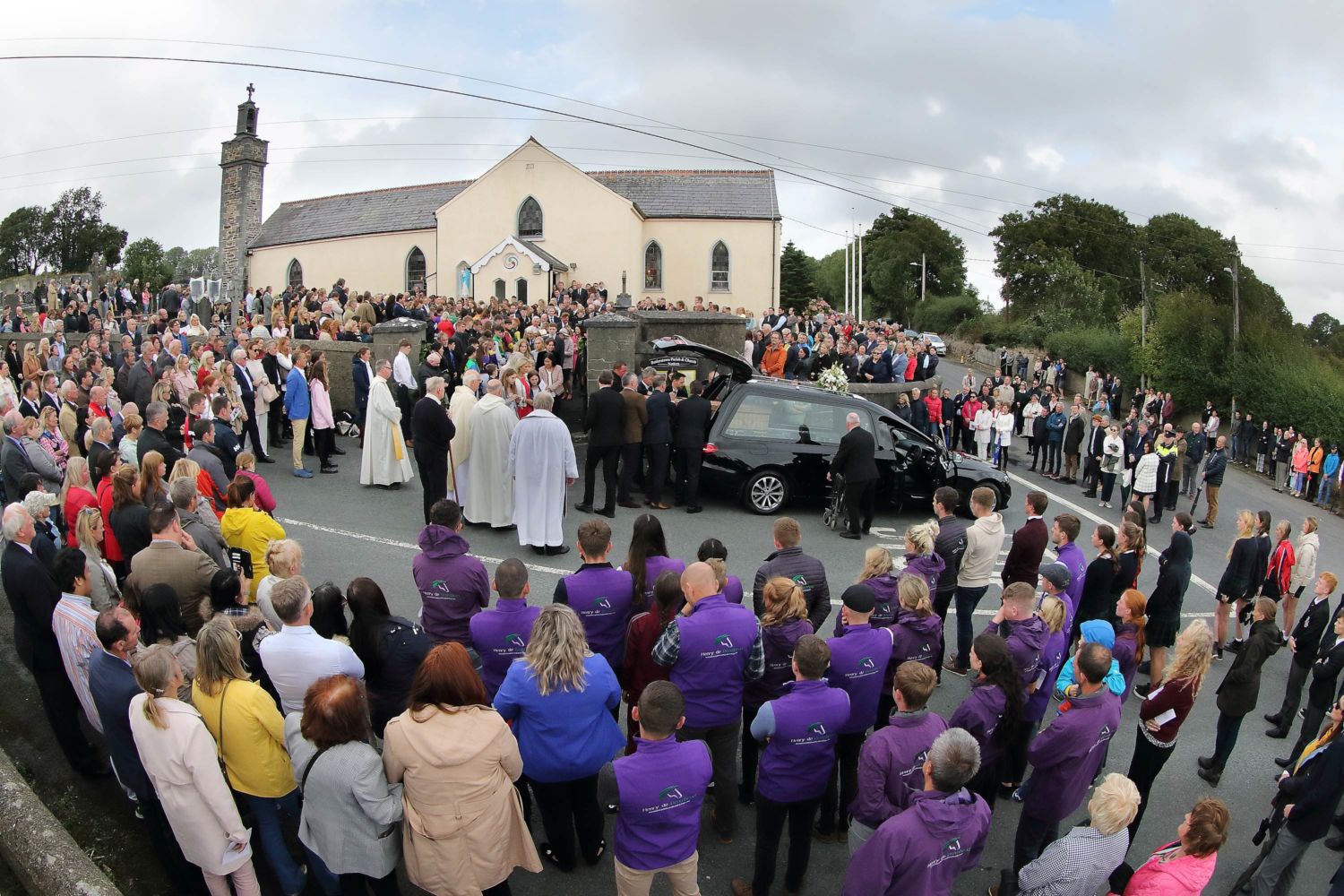 As the sun broke outside the church, mourners, visibly emotional, wiped away tears as they listened to Henry and Heather deliver the eulogy for their “one-of-a-kind” only son.

“We would like to thank you all for coming. The support is just unbelievable. Every person we meet is giving us a little more strength. It’s amazing. After a lot of time and our best efforts, Jack and Mia finally arrived on March 31, 2009.

“I just ask any of you that whoever you love, make sure you tell them because if something like this happens to you. I’m telling everyone here I love them, which I genuinely do, because you are all so amazing and so supportive of us. If something like this happens to you, something so tragic as it is, it’s a great comfort and I would love you all just to take that away with you. We would really appreciate it.

“Just two more lines. Whenever Heather would get a little bit stressed or wound up, Jacksy would turn around and say, ‘It’s alright Heath, you’ve got this’, and the last line goes like this because he used to say it to us every night, ‘Night Mum, Night Dad, Love You’.” 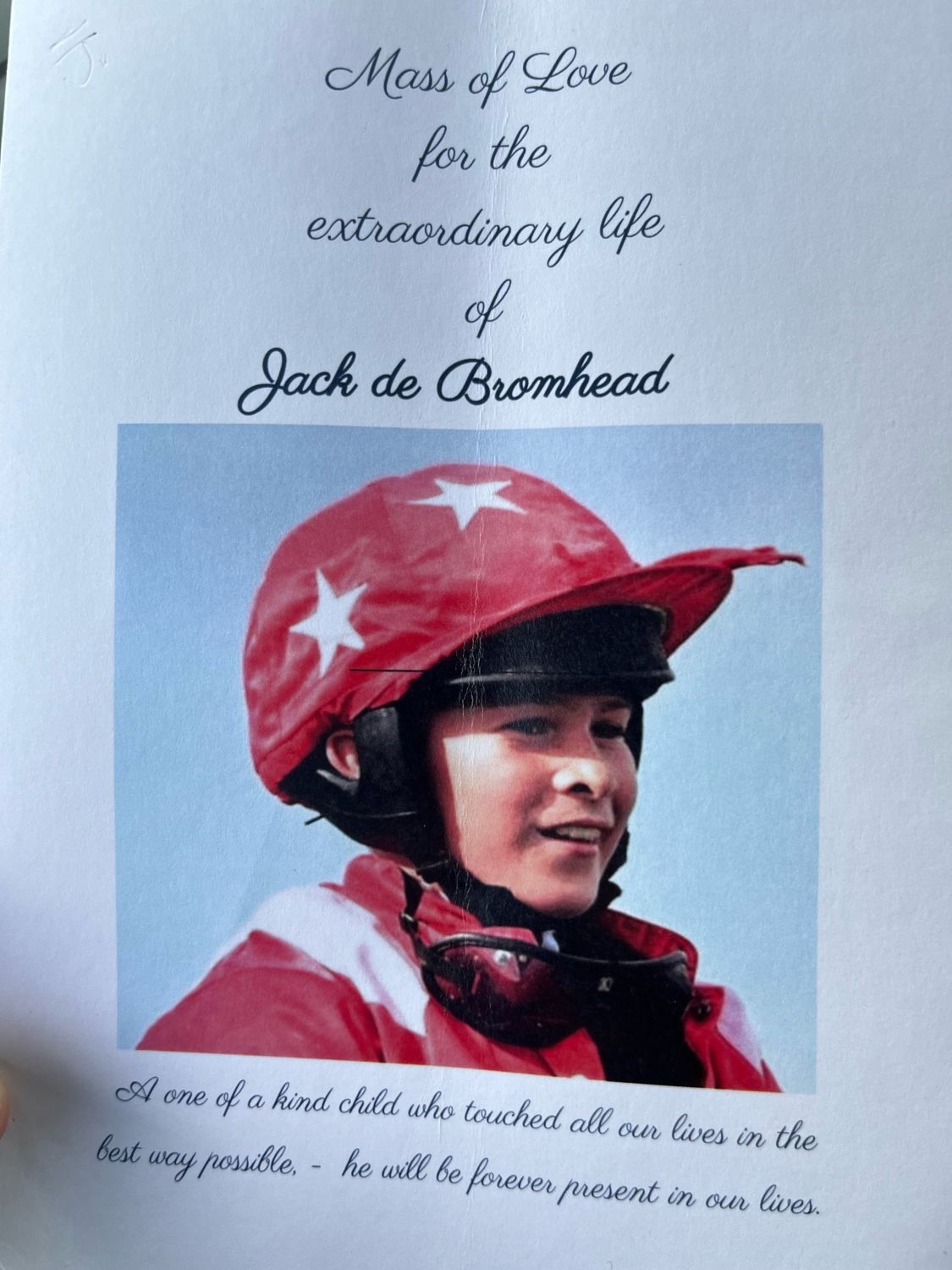 Jack’s grandfather Andrew Moffat, who with his wife Marian Davenport were present at Rossbeigh Strand on Saturday last when the tragedy occurred, remembered his grandson and events of last weekend in a touching tribute.

“On the late afternoon of the 3rd of September, all our hopes and dreams for our beautiful, charming, charismatic, and wonderful Jack were shattered forever in the riding accident in the dark murky Atlantic waters washing onto Rossbeigh Beach.

“Our 13 years with our beloved Jack will never be forgotten by his family, and all our friends and colleagues, who knew the happy, loving child that you could have ever hoped for. Jack, you will live in our hearts and memories forever.”

His remains were carried from the church to the sound of Coldplay’s “A Sky Full of Stars” before a member of the de Bromhead family sounded the hunting horn one final time like Jack did so many times during his young thirteen years.

As his hearse pulled away from the church, an applause broke out as Henry, Heather, Mia, and Georgia de Bromhead walked in arms down the road – a poignant reminder to us all about how fragile life really is, with his mother Heather turning to thank the large crowd that stood in solidarity with them during their darkest hour.