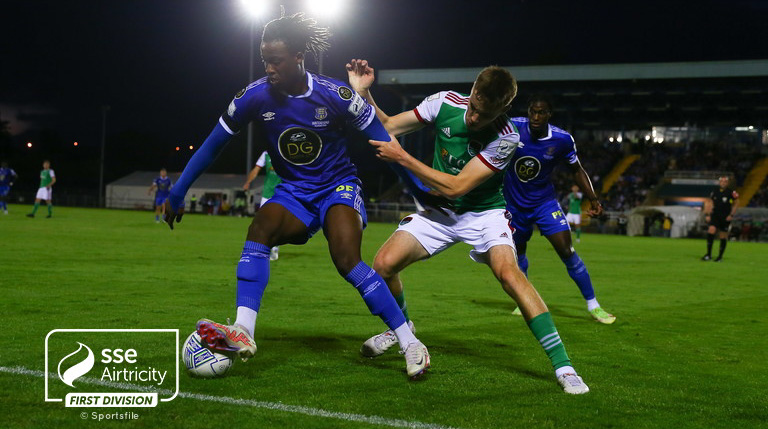 For a game that saw 3,418 supporters turn up that created a carnival atmosphere in Andy Pilley’s first game as owner of the club, it was a sensational finish to the tie that saw the equaliser and Cork’s match-winner arrive in the dying minutes.

A disappointing first-half sparked into life when Cork City struck the front on 55 minutes when Matt Healy sent over a left-wing delivery that saw Barry Coffey’s shot saved by keeper Paul Martin, but Cian Murphy hammered the close-range rebound to the net.

The game swung big time in favour of the league leaders two minutes later as the Blues were reduced to ten men when Tunmise Sobowale received his marching orders with a straight red card after clashing with Cork midfielder Aaron Bolger.

It was the crossbar that denied the hosts an equalising goal on 65 minutes when Phoenix Patterson whipped over a brilliant left-wing corner that picked out the run of Darragh Power, but his close-range header came crashing back off the woodwork.

It was a super Phoenix Patterson corner-kick in the final minute that yielded the equalising goal for the Blues when his delivery from the left found the head of new Spanish signing Raúl Uche, and he planted a header past David Harrington from six yards.

In the fourth added minute of the second -half, Cork’s Darragh Crowley sent over a right-wing free that saw a teammate go down in the area under pressure from Wassim Aouachria that saw Patchell point to the spot, and Ruairi Keating dispatched the spotter past Paul Martin with the aid of a post with Blues manager Danny Searle also red carded by the referee after the final whistle.