“Whatever happens, we’ll be ready” 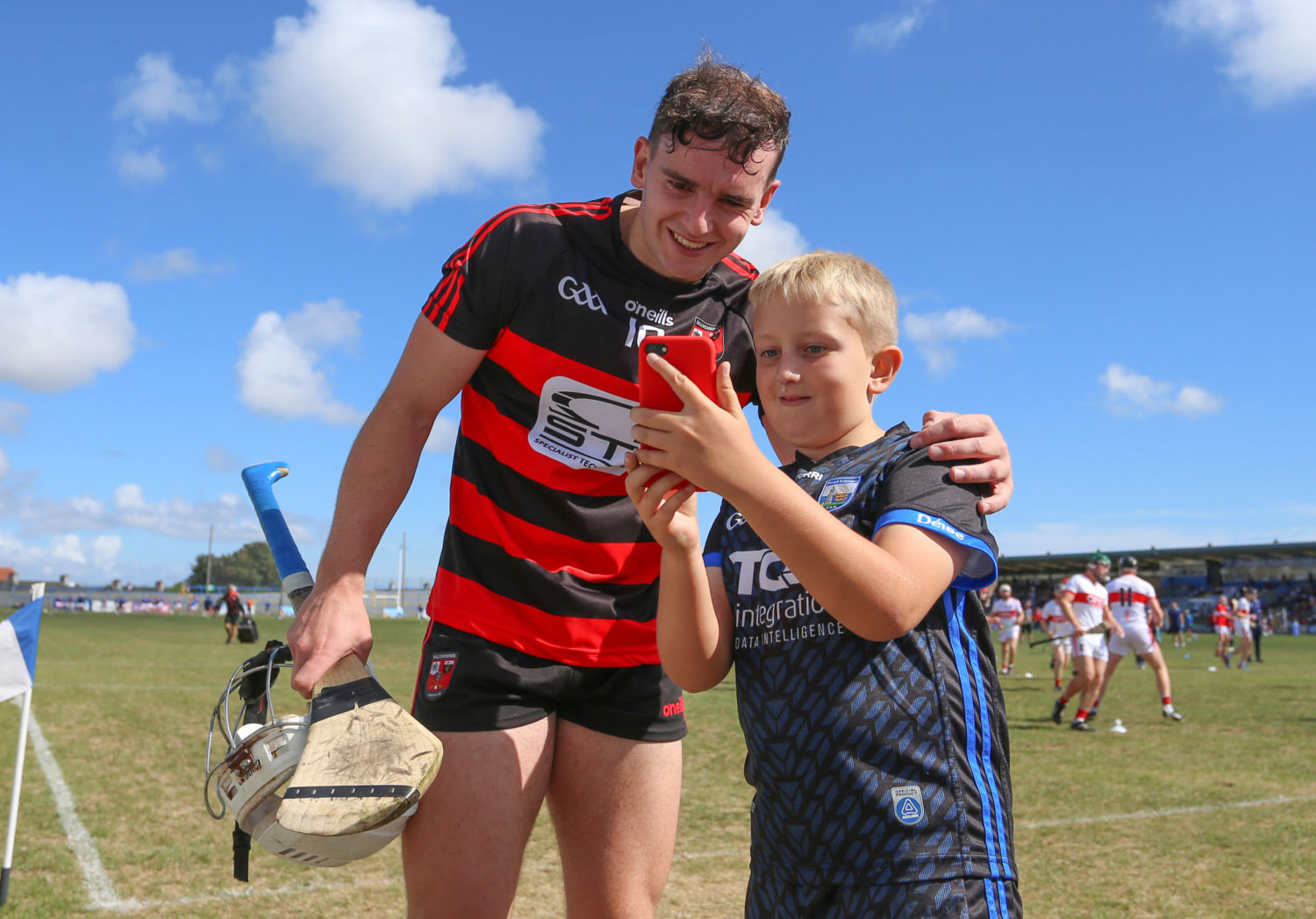 Dessie Hutchinson poses for a selfie with a fan after his side’s SHC semi-final win over Roanmore in Walsh Park. Photo: Inpho.

While the rest of the Ballygunner players warmed down after last Sunday’s win over Roanmore, Dessie Hutchinson was busy signing autographs. The pleas over the public address couldn’t stop his fan club pouring onto the pitch. He even obliged the kids in Mount Sion and De La Salle jerseys.
Despite the eleven-point winning margin, the Sky Blues made the Gunners earn their place in a tenth county final in a row. “In the first half, they made it really tough. To be fair, their work rate was excellent all over the pitch, especially around the middle. It was hard to start our attacks from there, they stopped them at source. I think we got going eventually. We did some silly stuff with the ball in the first half which we’ll have to improve on for next week. Overall, a really tough battle against Roanmore and that’s what we expected.”
The All Ireland champions went in at half time a point to the good but hurled below their best. “It was just to get ourselves going. We knew ourselves when we went into the dressing room that we were after leaving a lot of silly mistakes out there. It was just rectifying them and stopping the silly fouling. With a player like Gavin O’Brien, he is going to put the ball over the bar from placed balls all day.”
The Gunners called on underage star Patrick Fitzgerald after just 26 minutes. They both finished with 1-2 from play. It will be hard to hold the talented teenager in reserve for the county final. “Everybody knows around the county what Patrick has to offer. We knew exactly what we were getting when he came on. He’s had to wait for his chance and be patient. The intermediate was off his back from last week after coming on so he was purely focussed on this week. You see what he’s about, it’s an absolute joy to play with him in there.”
Hutchinson had Kevin Mahony to thank for his first half goal which brought the sides level. “The work he does for the team is absolutely incredible. Sometimes, it’s overlooked by people looking in from the stand or whatever. Kevin is so important to us. The 26 players and the management know exactly how important he is.”

15TH CHAMPIONSHIP GOAL
That was Dessie’s 15th championship goal for the Gunners. He has scored 15-106 in 28 games since making his senior debut against Clonea back in April 2019 (15-102 from play). He has rattled the net against Tallow, De La Salle, Sixmilebridge, Passage, Fourmilewater, Lismore, Ballyduff Upper, Kilmallock, Shamrocks Ballyhale and Roanmore. The number ten is already on 1-16 this season.
His record in county finals stands at 2-16 in three appearances. 1-3 against De La Salle, 0-4 against Passage and 1-9 against Roanmore. “Every game throws up a different challenge. Whatever happens, we’ll be ready.”
Dessie has never lost a Waterford SHC game and doesn’t want to start on Sunday.