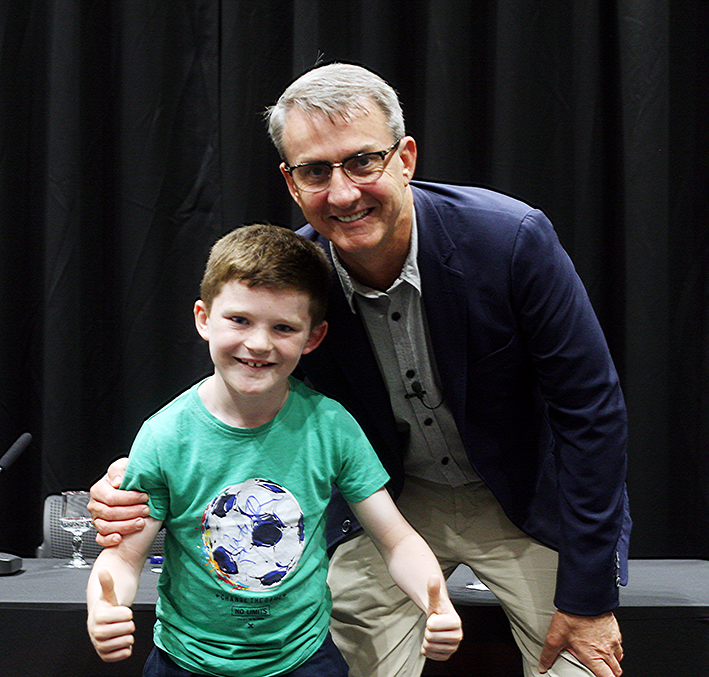 New Waterford FC owner Andy Pilley held a Fans Forum before briefing the local media on his plans for the future at an event held at the SETU Arena on Wednesday evening last where over 300 supporters got to ask their questions to the Blackpool native.
Pilley was joined at the forum by his son Jamie, who is a director of the club, Will Watt, who is Fleetwood Town secretary, Sam Fielding, who is Head of Marketing and Media at Fleetwood and Wayne Bibster, who is Supporters Liaison Officer with Fleetwood Town.
The evening, which was hosted by Will Watt, was also attended by club staff, which included first-team Head Coach Danny Searle, his backroom team, and some players as they listened to the questions from the crowd that brought very positive responses.
There’s no doubting that there is definitely a feel good factor and vibe about the club since Andy Pilley’s takeover from Richard Forrest last month, and this came across in the media briefing that he gave the local media where he outlined that building stability and bridges in the football community is a big priority.

A REAL CHALLENGE
Speaking to the Waterford News & Star, Andy Pilley addressed the need for multiple revenue streams where the club isn’t just relying on his wealth. “This is a challenge that I’ve been working on for the last 18 years since I was chairman of Fleetwood Town and things are going to be very similar in Waterford where I must create a football club that’s not reliant on anyone’s individuals wealth.
“I think that is a very dangerous business model and we must have multiple revenue streams for this football club. That’s what endeavour to do. There are so many obvious things where we want more supporters and we want to be able to trade well.
“By that I mean that we want to be able to sell players to high levels and to get sell-ons. We want have more revenue streams like food and beverage, merchandise, and there’s lots of associated income streams involved with football clubs. I know of those, and I will endeavour to deliver and bring them to Waterford.”
Asked has he spoken to any local or regional businesses about getting involved in the club, Pilley said: “We haven’t a chance yet because it has been something of a whirlwind time at the minute. It’s less than three weeks since my first visit to Waterford.
“From the time we’ve come across, we’ve had to take stock really on what shape the football club is in, and we’ve taken stock. We’re delighted to proceed and I’m only the new custodian of the football club. We have an awful lot to do.
“We need to engage with the fans, which we’ve done tonight, and it seemed like a very successful night, but the next thing we have to do, which is really important, is to engage with the local business community. They will play a huge part in the success of this football club.
“I want to create a model where they can use the football club as a vehicle to promote their businesses, they can be associated with a winning brand, and that’s what we want to do.” 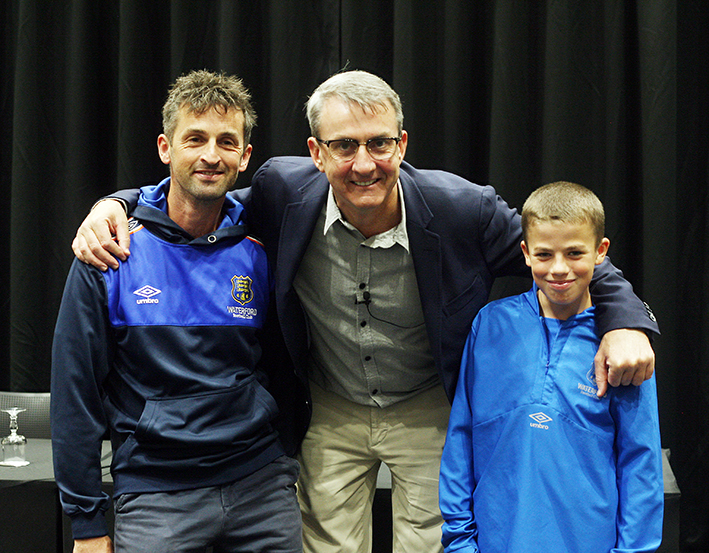 At the Waterford FC Fan Forum at the WIT Arena last Wednesday were, Lory O’Hanlon, Andy Pilley and Denis O’Hanlon.

NEW LEASE AND POTENTIAL CHANGES
On the potential of a new lease on the RSC and make the off-field side of the club a full-time set-up, Pilley added: “We do feel that we’re very close to confirming an extension of the lease on the RSC, and my understanding is that whilst there has been a verbal agreement, nothing has been signed yet.
“The RSC is key obviously. It’s the home stadium of the football club, and I’m delighted that City Council seem to be right behind us in getting us some longevity and continuity. It gives us a great base to build on, and I’m looking forward to meeting them, having a cup of tea with them, and discussing how we take it to new standards and levels.
“It’s absolutely critical that the football club has got a solid infrastructure. I’m only as good as the people around me, and I don’t want to bring in a team of people from England. We do have some very good people associated with this football club already, but the reality is that it’s my belief that we’ll need more people.
“We’re going to need people who are based here in Ireland. Irish Nationals, who are professionals, that can help take this football club to where it needs to be off the field, to enhance the supporters experience, and to have the confidence of the business community.
Asked about the players and management going forward, and planning for a squad for next season, Pilley said: “I think that you’ve got to have good knowledge of the Irish League both First Division and Premier. My take on Danny Searle so far is that he seems incredibly knowledgeable on the other teams. I’d no information that his knowledge is sub-standard, but I take you’re point that it can always be better.
“If it means that we need scouts, but I’m sure that Danny has got a solid agent base or scouts that he can engage with for next season. We’ve got to boost the infrastructure both on and off the pitch. In footballing terms and non-footballing terms, we are committed to doing so.”

BUILDING RELATIONSHIPS
“I think that the message we need to get out to the football players here in Ireland is that if they aspire to play in England, Waterford has a common ownership with an English football club. If they come and play for Waterford, and they are good enough, there will be an opportunity to go across to Fleetwood. There’s also an opportunity for us to bring players across from England to Waterford. It can work in both ways.
“We’ve been on this journey before and we’ve managed to achieve massive success with Fleetwood so there’s no reason why we can’t here in Waterford. It’s a club and a city that should be in the Premier League, and we’re going to work hard to get there. Do all we can to get promoted this year, and if it’s not to be this year, we’ll give our all to achieve it next year. We’ve got work hard to ensure this football club succeed and grows both on and off the pitch.
“I’m not aware of relationships whether they are good, bad or average with the grassroots clubs and leagues in Waterford. It’s been a whistle wind few weeks, and so much to take stock of, but this is something on our to do list because we need good relationships.
“These relationships needs to be as strong as they possible can, and we need to be able to add value to them. We want to be that pathway and roadmap where these rough diamonds can find a way to Waterford where can polish them and they can play for our football club, and beyond.” We look forward to working with Andy and wish him all the very best during his ownership of Waterford FC. 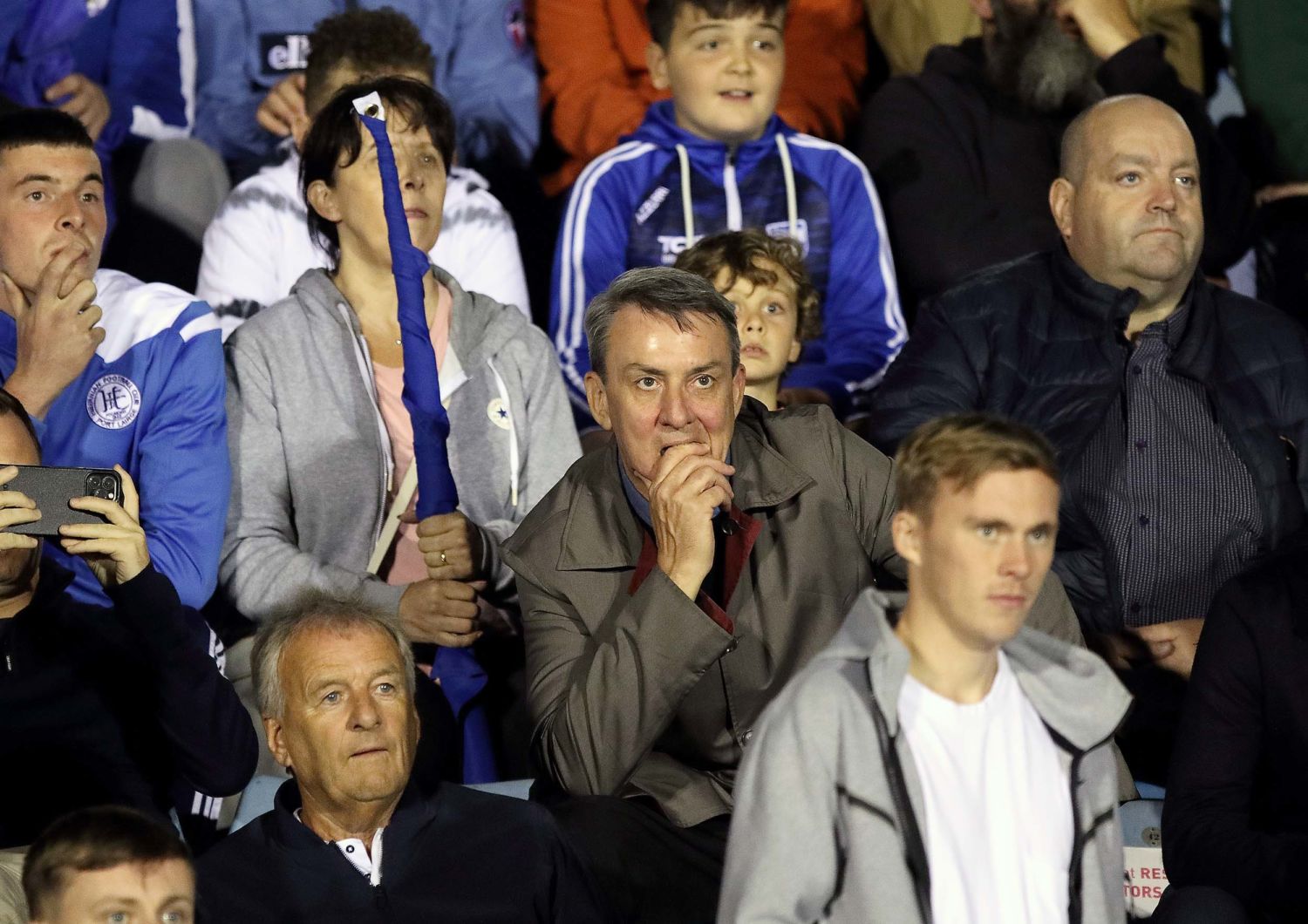 Any Pilley during Friday night’s late late defeat to Cork City at the RSC.