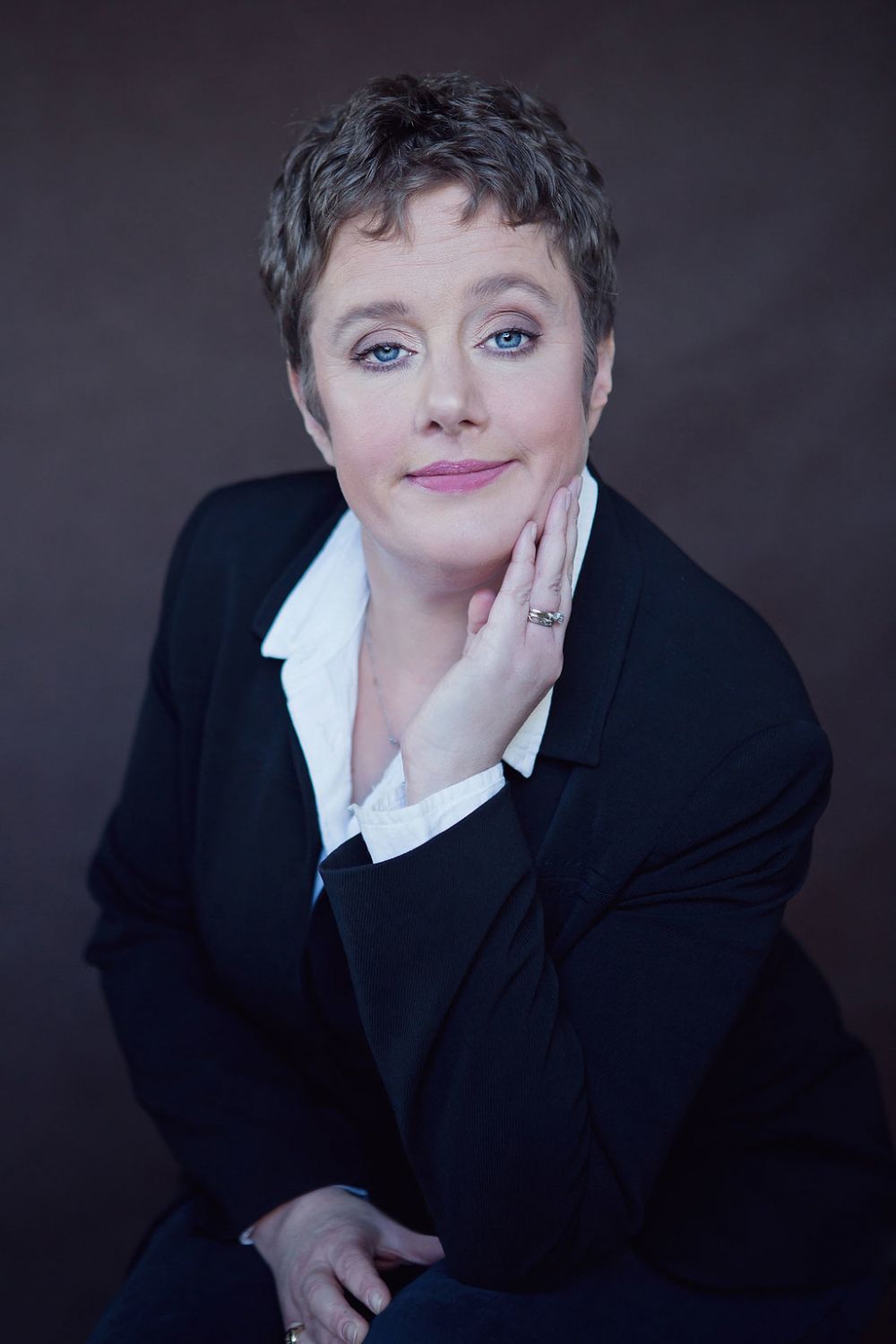 CLONMEL’S Derbhile Graham, who is clinically blind and now living in Tramore, arrives with a whelter of bustling foostering before a full house in Tramore’s Coastguard Arts Centre and declares that the wan “with the wonky eyes” has a lot to get off her mind. “So”, warns the Clonmel author/curmudgeon, “expect turbulence.”

She’s an unapologetic contrarian and in her one-woman show, ‘People Wipe Me’, she traces her curmudgeonly roots back to misunderstandings that arose due to her restricted sight. Derbhile saw toys upside down… failed to read those admonitory faces… never really picked up on irony… or the don’t-do-that’s in growing up.

“I was made for the hard road,” she declares as she sets about challenging the conventions of modern living and underlining the nonsense that she believes goes with it. No window-shopping for Derbhile in her search for items such as the perfect jumper, and she scoffs at the idea of buying a top and having to wear another one with it.

“It’s about the unwritten rules we’re all expected to live by and what happens if you decide to break them,” says Derbhile. She believes that appointments should be on time. Especially hairdressers as she details an appointment that ran 35 minutes late and has left Derbhile pretty cross. No chit-chat with the suffering stylist for Derbhile on this occasion.

This contrarian is a self-declared “straight talker” who says what she means and means what she says. Unlike Irish people “who never say what they mean”, Derbhile’s Toastmaster experience has taught her to come straight to the point.

“Basically,” she laughs “all Irish people want is your name and the details of where you come from.” Those close degrees of separation lead on to comments such as “I have you now!” As far as Deirbhile is concerned, anyone who wants directions should consult Google Maps because “that’s what they’re there for.”

Derbhile takes aim at golf club hierarchies that frown on “blow-ins” and restaurants that believe that the only soup is vegetable and that all seafood chowder is divine. She laughs at foodsters who believe that the best seafood chowder is in some out-of-the-way nook in Galway. It’s the predictability of it all that disturbs Derbhile before she settles into her “who-what-how” routine of her straight-to-the-point disturbing style of questioning.

Derbhile’s audience laughs when she tells us that she likes to walk the Greenway on the wrong side. After all, why shouldn’t she? Her literary background sees her throw grenades into conversations at venues such as writers’ bookfairs where she describes a Maeve Binchy book as “shite”. Definitely a conversation stopper! Thank you letters are not for her, either, because they’re rarely sincere and she questions why people cannot really express their true opinions. “Why not ?” she asks.

Derbhile has that Irish person’s ability to laugh at herself. She laughs at her own naivety in a conversation with a Parisian when she declared that she “didn’t like Paris” or when she announced to an audience that a speaker at a woman’s group was the best speaker they had ever had, while their last speaker sat in the audience and fumed. There’s a general feeling that we’ve all got the t-shirts for comments like that.

However, there are some lessons that she admits were “hard-learned” and that she’s had to pay the price of her contrariness. “I’ve lost a hairdresser,” she admits. Like King Lear, however, she feels “more sinned against than sinning”.

Nevertheless, it’s a je ne regrette riens from Derbhile as she leaves us while beating out her insistent message of confronting beige banality on her toy drum.

“Have I paid the price?… yes! badum!… has it been worth it? Yes! Badum…tissssh!” and leaves her audience standing in applause for the anti-heroine that faces all that life has to throw at her.