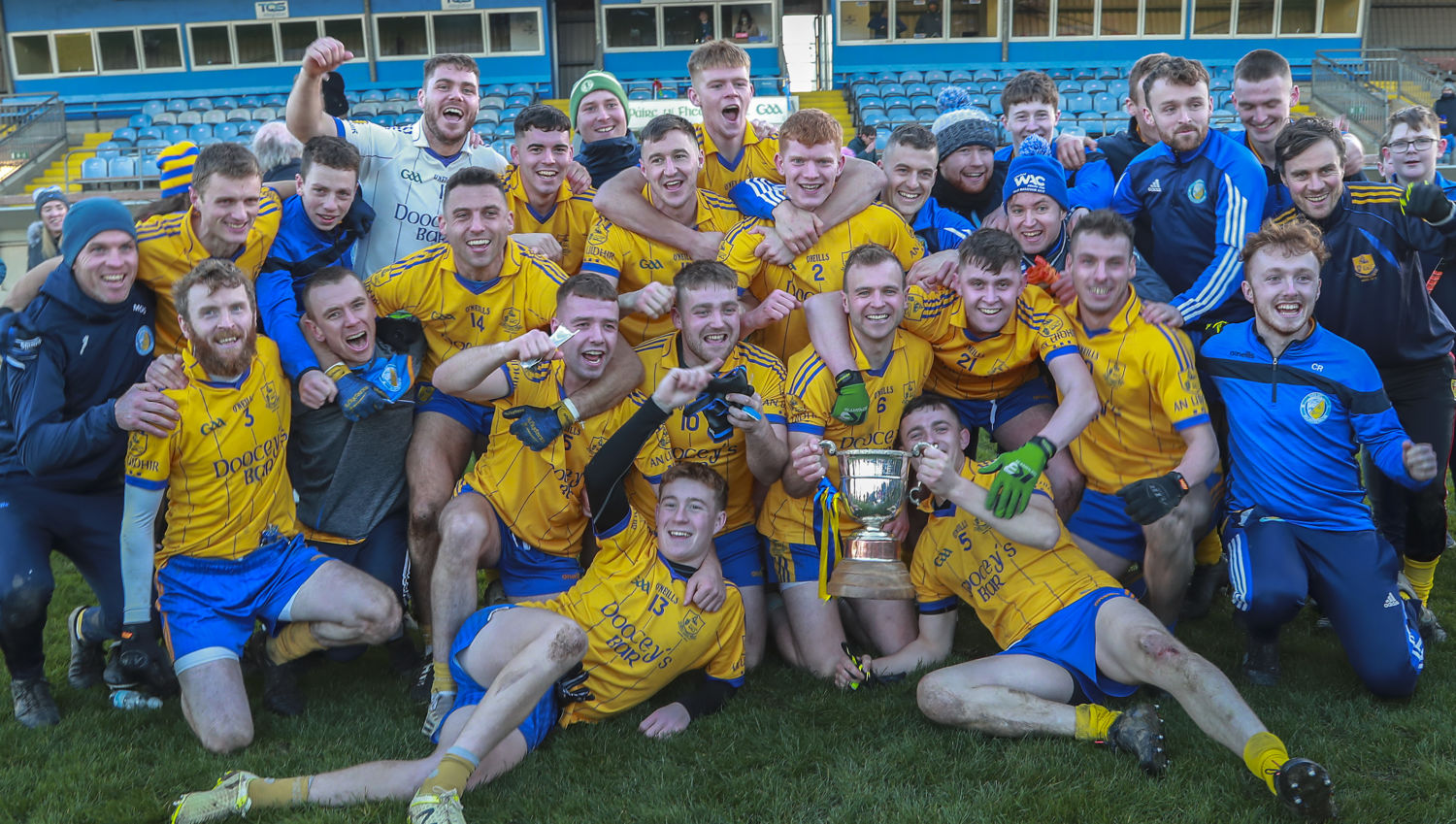 The Nire Players celebrating their win over Rathgormack in the 2021 Waterford Senior Football Championship final in Fraher Field. They will begin their title defence against Stradbally on Saturday night. Photo: Sean Byrne.

With the completion of the hurling championships the county and divisional boards have wasted no time in pushing ahead with the football championships. The Senior Football Championship will be run on the same format as the Senior Hurling with no team eliminated at the end of the group stages where the top team in each group will go into the quarter final and await the winners of the second and third team playoff with the losers there going into the relegation playoffs.

Saturday Next – Walsh Park 2.30 pm. Group C Gaultier V Kilmacthomas
Just one week on from the county hurling final Gaultier’s Ballygunner players will be in action against Kilmacthomas here as the Barony men seek to go one step further than last year’s semi-final appearance in quest of that elusive senior title. The split season should appear to work in their favour where their Passage and Ballygunner players are concerned and they will be strong favourites going in against a Kilmacthomas side whose main objective last year was to avoid the relegation trapdoor. Numbers are not a problem for Gaultier and they will be hoping that Billy O’Keeffe and Dessie Hutchinson will have come through last Sunday’s hurling final without injury to join up with the Fitzgeralds, Lynches and Cullinanes here. Kilmacthomas had a first round win over Brickey Rangers last year that enabled them to avoid the relegation playoff and will be hoping for a similar start here. They will be relying on such as Gary Kiely, Jay Hurton, Reece Power, Jack Dee, David Hallahan and Adam Walsh to come up with big performances but if Gaultier are at full strength it is difficult to see other than a win for them here.

Fraher Field 7 pm. Group D The Nire V Stradbally
This tie would normally be seen as a big championship game but under the present system it is more likely to be a feeling out exercise between bitter rivals. Defending champions Nire will be favourites against a Stradbally side that continues to be in transition. When the sides met last year in the quarter final the Nire came through with something to spare in a tough encounter and will field much of their title winning side here. Stradbally will have a number of young players coming through to join seasoned campaigners such as Michael Walsh, Shane Lannon, Daniel Weldon, Shane Ahearne, Robert Ahearne and Jack Mullaney but The Nire must again be fancied to win this one.

Sunday Next – Fraher Field 1.45 pm. Gr. A Ballinacourty V Clashmore
The first game of this double header sees Ballinacourty in action against Clashmore and while this would normally be seen as a win for Ballinacourty injuries to top players such as Brian Looby and Mark Ferncombe and doubts about the fitness of Conor Prunty would appear to make it a more open contest. Consistency has been Clashmore’s begin this championship, failing to produce back to back big performances. There appear to be concerns about Brian O’Halloran’s fitness but if they can get big performances from Tadhg De Burca, Ciaran Bourke, James O’Leary, Paul O’Connor, Declan Allen and Brian Lynch they will cause problems for Ballinacourty. The Burgery men still have a good squad of players in such as Aaron Beresford, John Elsted, Sean Whelan Barrett, Neil Montgomery, Michael O’Halloran and Patrick Hurney and will be very hard to beat.

Can Ballygunner join the nine-in-a-row club?