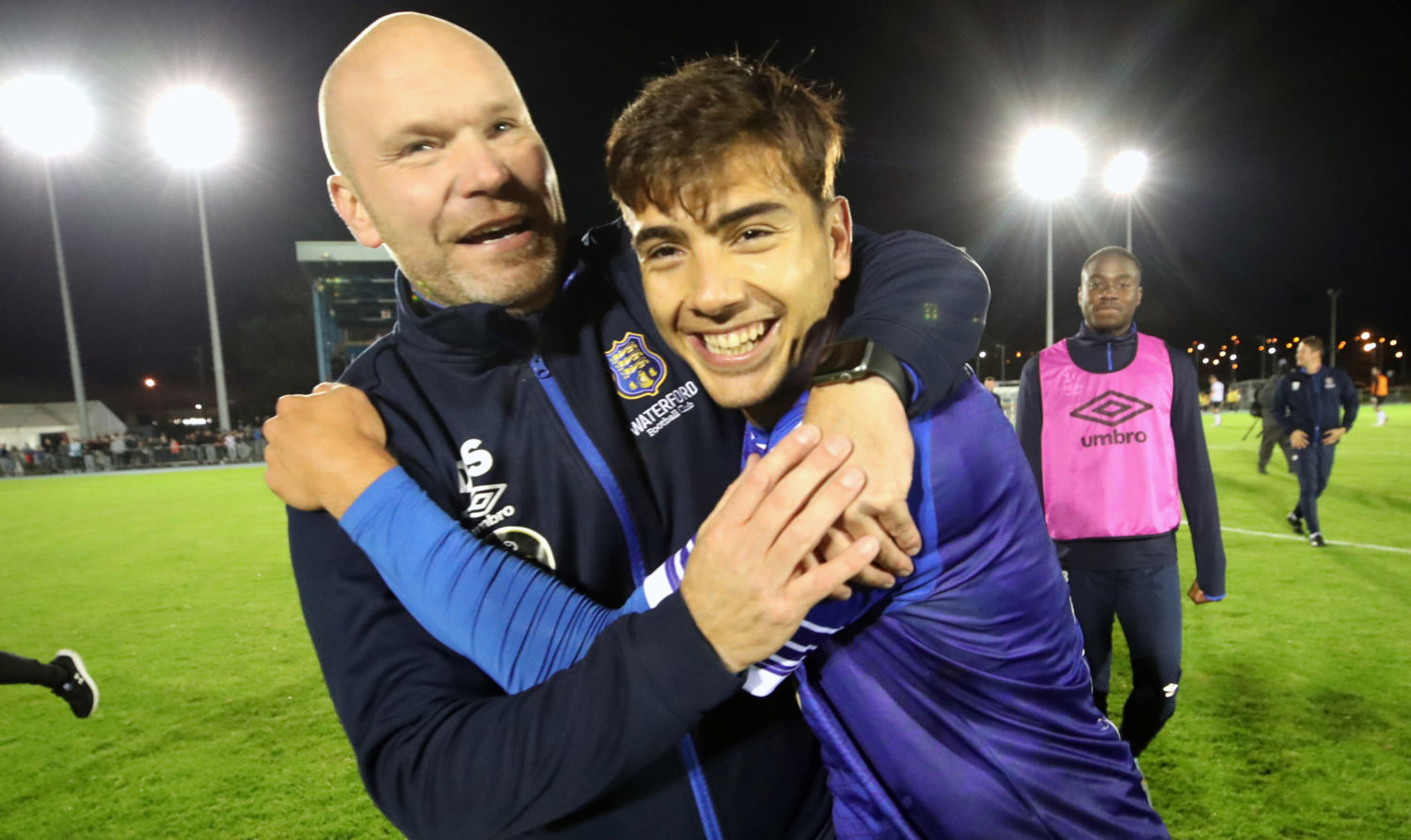 Waterford manager Danny Searle and Raul Uche celebrate after Friday night’s FAI Cup Quarter-final win over Dundalk. Searle is delighted to get another home draw in the semi-final. Photo: Inpho.

After their brilliant FAI Senior Cup quarter-final win over Dundalk, Waterford FC will be at home in the semi-final after they were drawn against Shelbourne following the draw that was made after Sunday’s game that saw Derry City secure an extra-time win over Shamrock Rovers.
The Blues have already dispatched of two Premier Division sides this season in the cup after wins over St. Patrick’s Athletic and Dundalk, but now they face another stiff test as they take on Damien Duff’s charges on Sunday, October 16 with a kick-off time to be confirmed.
Goals from Shane Griffin, Darragh Power and Phoenix Patterson in front of 3,612 supporters in Friday’s quarter-final will give the Blues great hope going into the last four tie against a Shelbourne team that won their North Dublin derby meeting with Bohemian FC on Sunday by three goals to nil.
The news that the club was waiting for was to be drawn at home and this will be welcomed by Head Coach Danny Searle, his players, and the club in general where there’s no doubting that this cup semi-final fixture will attract another massive crowd.

“A CRACKING ATMOSPHERE”
Waterford last played Shelbourne in the FAI Cup back in 2017 when they lost 3-0 at the RSC with David McDaid missing a penalty. John Sheridan’s first game in charge of the Blues in 2020 saw John Martin’s lone goal winning a league game at Tolka Park 1-0 with the return league game at the RSC ending in a 1-0 defeat with Ryan Brennan netting the winner.
Over 7,000 fans have turned up to the RSC for Waterford’s last two games – home to Cork City in the league and also last Friday’s last eight tie, and Danny Searle is now looking forward to another big occasion at the RSC where the Blues hope to progress to their first final appearance since October 2004.
Speaking to the Waterford News & Star on the draw, Searle said: “When you get to this stage there are no easy draws but for us to get another home draw is fantastic. The cracking atmosphere created at the RSC on Friday was outstanding and I’m confident it will be even better when Shelbourne arrive.”
Ticket details and the confirmation of a kick-off time for the game will be announced in due course. Derry City will have home advantage in the other semi-final against Treaty United, who beat UCD, with the final scheduled for the Aviva Stadium on Sunday, November 13, with a 3pm kick-off.