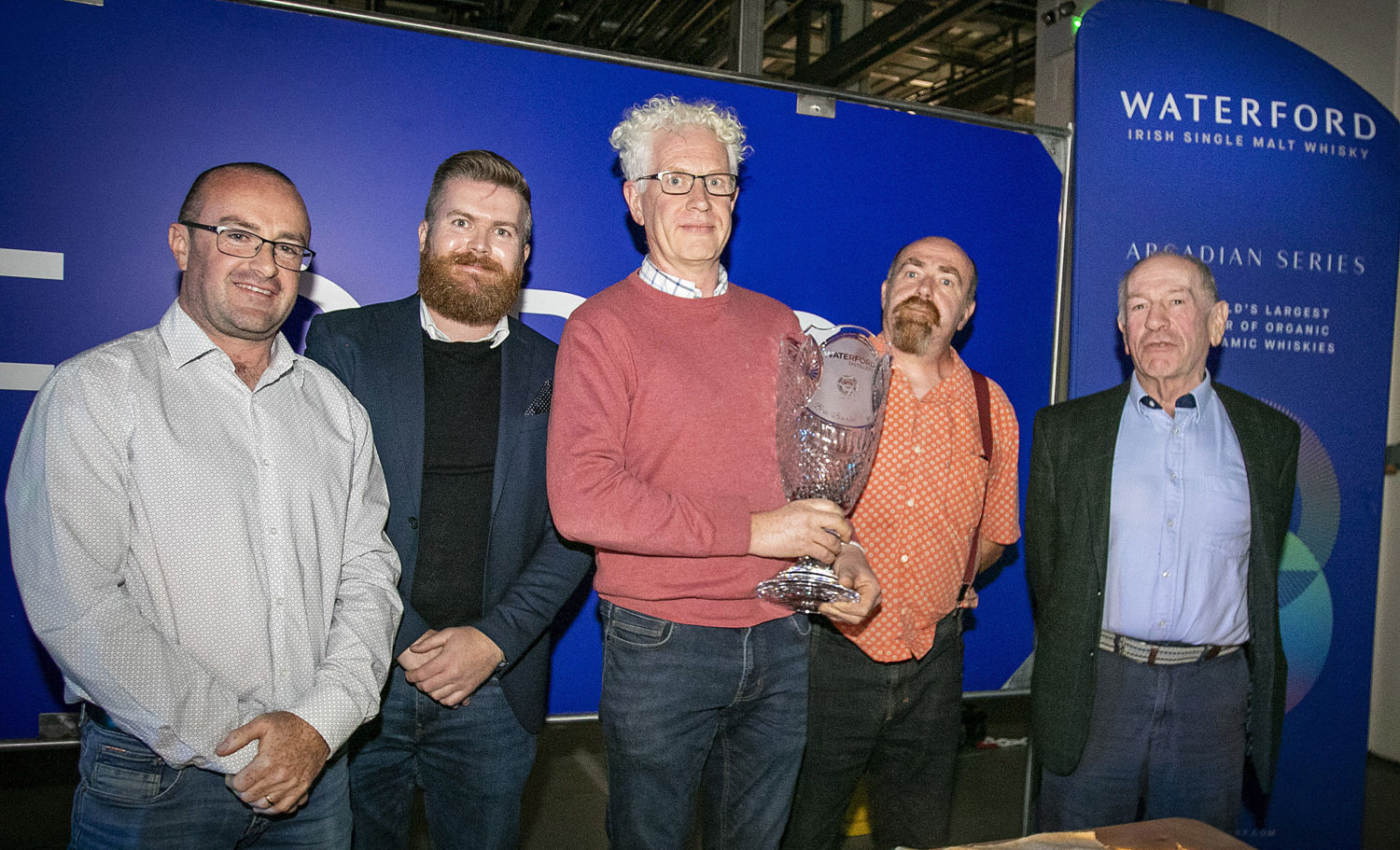 THE three farmers who successfully committed themselves to growing barley in an ‘uber-dynamic’ manner to help produce the world’s first biodynamic whisky have been named as Minch Malt/Waterford Distillery Growers of the Year.

Trevor Harris, John McDonnell and Alan Mooney were named as the joint winners of the 2021 Award at the Grower’s Gathering, which was held at the Distillery on Grattan Quay on Thursday evening last.

“Crop ’21 produced some outstanding barley,” said David O’Hare, Minch Malt’s Ireland Sales Manager. “So we felt it was only right to present it to a group of growers, which is why we awarded it to the biodynamic growers of John, Alan and Trevor.”

Distillery Head Brewer and Production Manager Neil Conway added: “These guys, well I won’t say there a bit different from the rest of all our growers here tonight but in fairness you have to hand it to them. When we started this project, there was nobody (in Ireland) growing any barley biodynamically so these guys have really stepped up to the plate. Year on year, the quality of biodynamic barley has improved and it’s perceived very well on the international market, particularly in France and Canada and I think once Irish palates and whisky enthusiasts get used to how biodynamic whisky tastes, it’s going to be a very successful project.”

Biodynamic: Luna represented Waterford Whisky’s first foray into production of a spirit brought about by a “radical farming philosophy” as part of the brand’s commitment to unearth whisky’s most natural flavour.

Messrs Harris, McDonnell and Mooney “stepped up to the challenge” and adopted barley growing practices in accordance to the principles derived from a 1924 series of lectures by Austrian philosopher Rudolf Steiner.

According to Waterford Distillery founder and Chief Executive Mark Reynier: “Apart from the fact that it’s a world first, and apart from the fact that no-one else in Ireland will ever do one, it just struck me that it’s something we ought to be quite proud of as a region. It’s quite a complicated idea, it’s a rather obscure idea. You quite often hear any number of things being described as the best in the world when in truth few things ever described in such terms ever are. But this actually is the first whisky in the world to be produced from biodynamic barley and that’s a fact. And it’s something that we in Waterford ought to be proud of and specifically because it’s agriculturally based. This is not a product that can trace its origins in bits and pieces assembled from everywhere: this is actually from the ground, from the earth, from a farming procedure and is distilled in Waterford City.”

Speaking to the Waterford News & Star in October 2021, Mr Reynier said: “The purpose of what Steiner advocated was to produce vibrant, chemical-free soil,” explained Mark.

“Now this was something I’d previously trialled at Bruichladdich (Distillery on the Scottish isle of Islay) but we couldn’t get Scottish biodynamic barley because no-one could grow it. So when I first arrived in Waterford in 2015, we had a meeting up in Athy and we got all the farmers together with Minch Malt (Ireland’s oldest and largest malt producer in the brewing/distilling industry) and I explained the principle of the single farm logistical set-up that I wanted to create, and of course part of that was that I wanted to get organically grown barley too.

“Now there were six farmers there who said they’d could grow organic and I remember saying at the time had any of them ever thought about going up to biodynamic – and I wasn’t even sure if any of them had ever heard of it. But then three of them said they would but that they wanted more guidance – and really what they wanted was inspiration. So I took them to Alsace in France where we visited three producers and spent a whole day with arguably the world’s greatest white wine maker, a guy called Olivier Humbrecht and our time with him really got under the skin of what biodynamics is all about which is, at the end of the day, regenerative agriculture.”

Mark continued: “But here’s the thing: it wasn’t called regenerative agriculture because they weren’t regenerating anything at the time – it’s what agriculture was if you get my drift. And then following on from that inspirational visit, we made a film about it which is on our website. So the three growers agreed to up the stakes by taking on board all of the biodynamic protocols. And you’re talking about a way of life; it’s not something that you play with. It revolves around the fact that as a farmer, everything you need from your farm is on your farm…

“And what I think is really intriguing about biodynamics is how it represents the culmination of 16,000 years of farming know-how, since the last Ice Age. Rudolf Steiner realised it was all being lost what with people leaving the land and going to the cities along with the advent of the agri-chemical industry that emerged from the munitions factories following the First World War…the soil was being chemically abused so Steiner resolved to do something about it: how to run a farm with all that accumulated know-how that constitutes biodynamic farming – and here we are, honouring those principles with this particular whisky. I’m not trying to save the planet; I’m just on a quest for natural flavour.”

Neil Conway thanked Minch Malt and all the additional inputs committed to by the growers as the distillery maintains its commitment to producing a truly distinctive single farm product.

Following the formalities, Head Distiller Ned Gahan brought guests through a tasting of Waterford’s most recent release, the Heritage Single Malt which uses the hunter variety of barley that hadn’t been grown in Ireland since the 1970s. 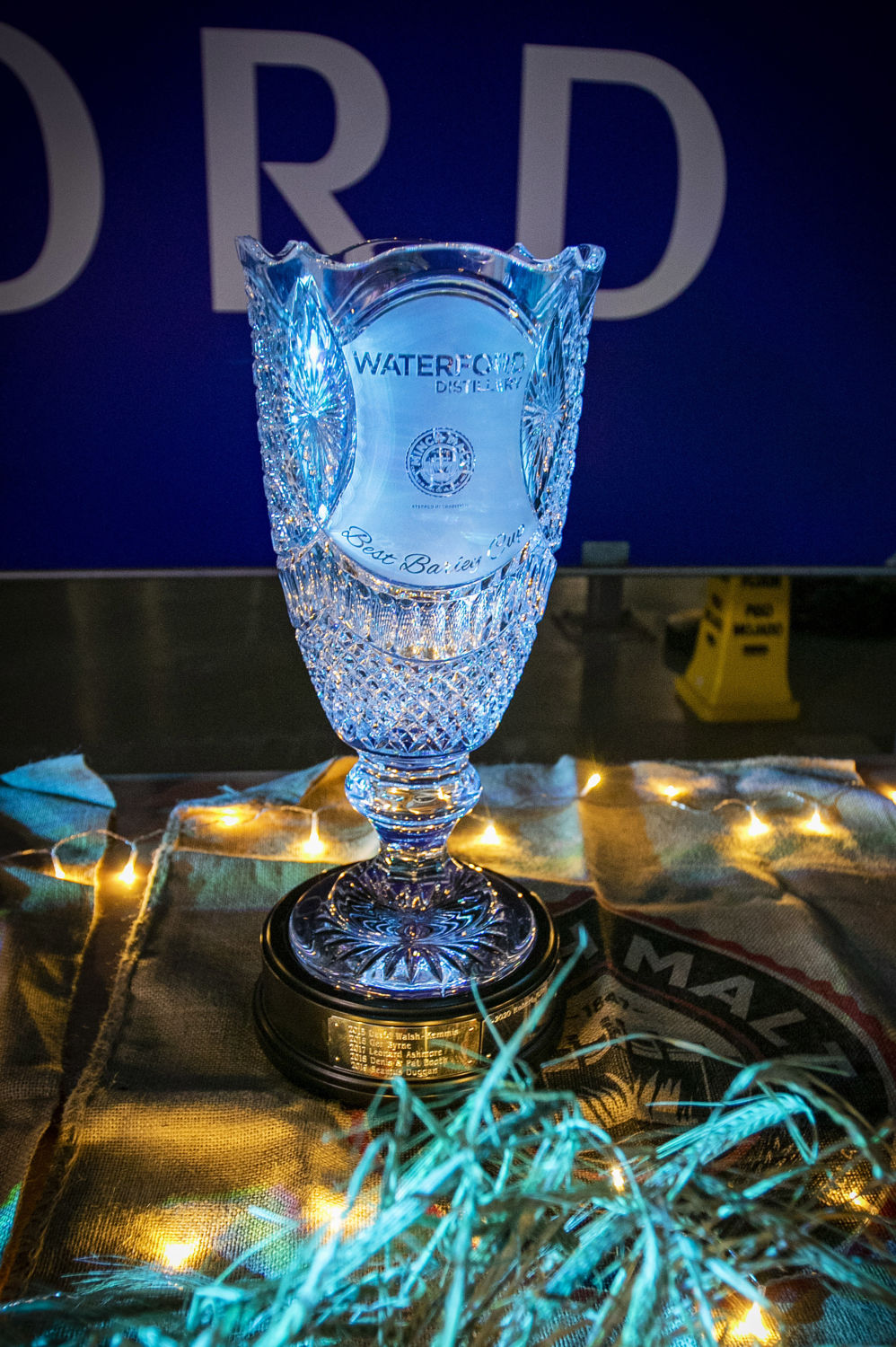 Growers from the South East and beyond attended last Thursday’s event, held a little earlier than usual in recognition of this year’s harvest.