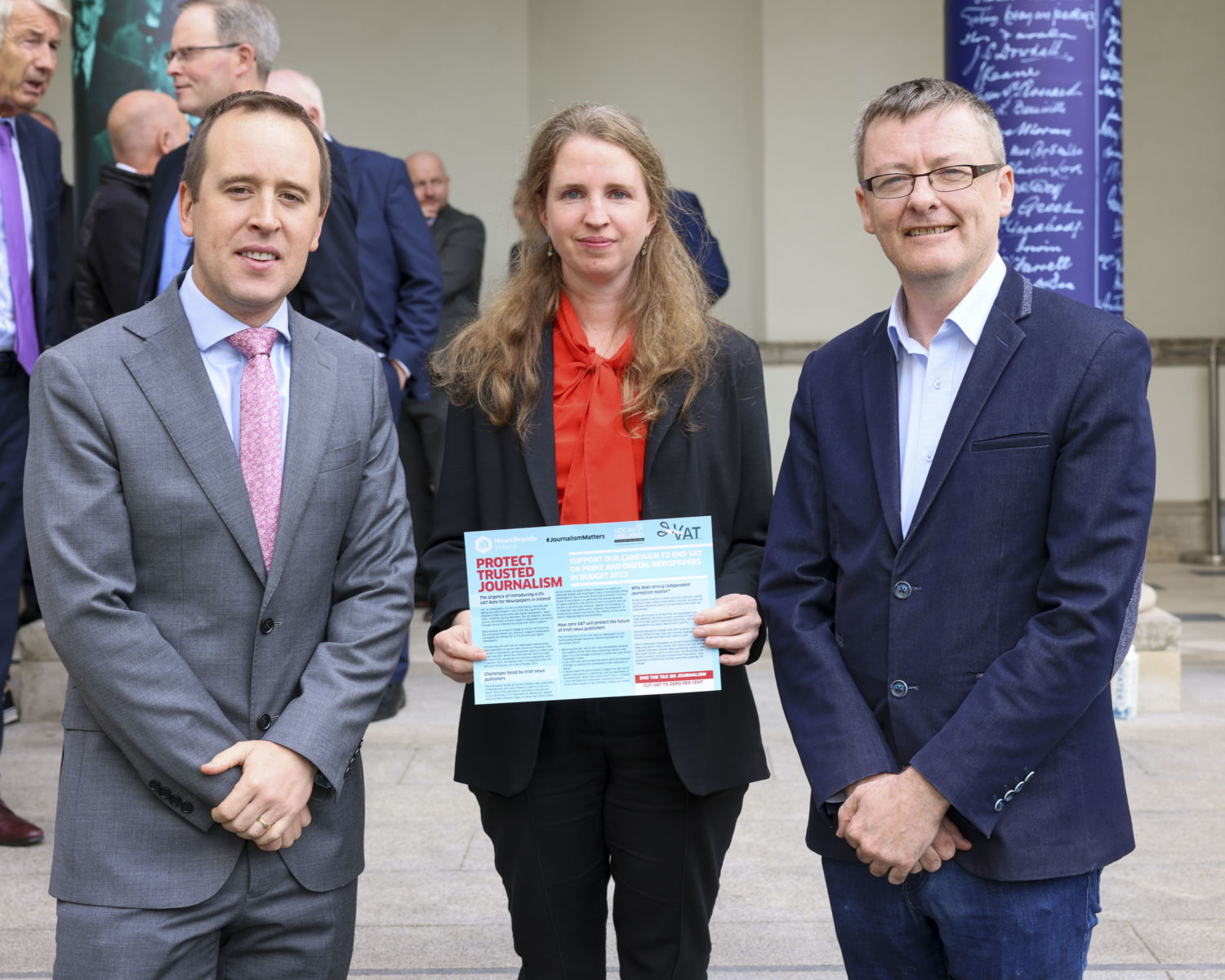 THE campaign to remove VAT for print and online newspapers has built momentum in recent years as we demand that the Government properly, and in a meaningful way, supports Irish Journalism. Newspaper editors and managers from across the country, including Mary Frances Ryan, editor of the Waterford News & Star, took our message to Leinster House last week, to impress upon Government Ministers and TDs that this is crucial for Budget 2023, in order to protect the future of independent journalism in Ireland.

Here are some facts around why this is essential for Irish journalism, for national newspapers, and for regional papers such as the Waterford News & Star.

Journalism is under threat. The growing power of the big tech platforms is disrupting journalism worldwide. New digital advertising models have put enormous pressure on local and national media. Alongside this, the growth of disinformation online means trusted, professional sources of news are more vital than ever – and key to democracy itself.

‘Left to keep struggling on under the current punitive VAT rate, more and more journalists will leave the industry, newsrooms will be forced to downsize, and some just won’t survive’

As put plainly by Justine McCarthy, journalist with The Sunday Times, and one of Ireland’s most respected commentators on politics and culture, “If society doesn’t have verifiable truth then society is at risk.”

This became particularly apparent during the Covid-19 pandemic, when Irish journalism provided excellent coverage, speaking truth to power, and ensuring that people were fully informed in relation to the virus, its trajectory and dangers, the vaccines and their rollout.

There is nothing to stop Dáil Éireann acting now. The government can robustly support newspapers under the new EU VAT Directive. In simple terms, this means the Irish government now has the power to remove VAT on print and online newspapers.

Why should they? Local newspapers are vital to our communities – we provide factual sources to inform views and policy decisions. Quality, professional journalism is essential for a healthy democracy, and also supports the wider news eco-system for broadcasters and digital publishers. That RTÉ news report or Nationwide feature profiling a Déise business or community initiative or serious lacking in government provision in health, education or other? There’s a high likelihood that was first brought to light within the pages of the Waterford News & Star. The mortuary debacle at UHW is a case in point – action on that only happened after the issue was raised robustly through the pages of the Waterford News & Star (a story which garnered Local Ireland News Series of the Year award for this newspaper). Without newspapers and our digital content, without our journalists working assiduously on the ground, countless important stories like this would not be told.

A detailed submission in relation to this campaign was made to the Department of Finance before the summer recess. It emphasised that introducing a 0% VAT rate in Budget 2023 would provide critical support to journalism and news publishers. The measure to help national and local newspapers would realise €18.5 million for our sector.

Other European countries support journalism with zero or lower rate VAT. Ireland’s VAT rate for news publishers is 9%. The UK is Zero.

Left to keep struggling on under the current punitive VAT rate, more and more journalists will leave the industry, newsrooms will be forced to downsize, and some just won’t survive. Journalism faces challenges from the cost of living crisis, the growing commercial power of tech platforms, the legacy of the pandemic, which hit advertising and circulation, and the soaring costs of newsprint – the latter alone has increased 240% over the last 18 months.

Zero VAT would allow Irish news publishers to help secure our future by investing in the business of journalism, giving greater value to readers and preserving jobs.

Doing nothing is not an option. The Irish government needs to act now.