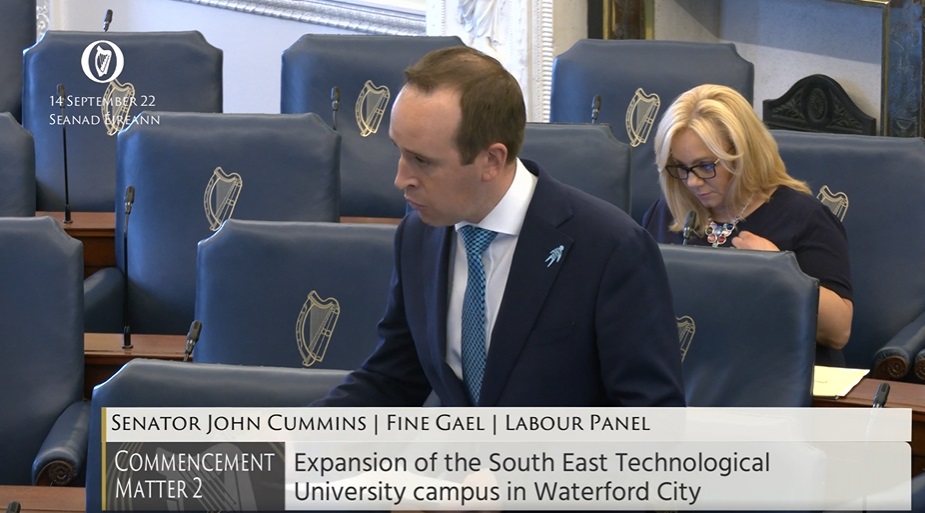 THE noise from both Simon Harris, Minister for Further Education, and Senator John Cummins in a carefully choreographed Seanad question and answer session about “permission from the Department of Public Expenditure to commence formal negotiations to purchase the Waterford Glass derelict site for SETU (WIT)”, has all the hallmarks of a dead cat. It’s a bit tiresome when genuine concerns expressed here about the extraordinary delay in delivering capital expenditure to Waterford is met with political rhetoric. It’s no wonder that the WIT college lecturing staff are getting restive.

They were promised a university and despite all the virtue signalling from the minister, his party and its local representatives, they have seen little progress. Sites on the Cork Road, empty since 2006, are still there. Instead of blather, could we just have delivery of what was clearly promised? But then maybe this is what politicians do.

“Oh look, there’s a dead cat,” they say, pointing away from the extraordinary delay in commencing construction of the proposed new engineering building at SETU Waterford and instead talking about their “ambition” for Waterford and repeating promises about expanding the footprint of the place. We are all anxious to see the glass site bought for the college, we all have ambition, but while  the glass site is a desirable, natural fit for SETU,  the place does not need extra land that badly. Capital expenditure is the key and Waterford has seen none of it at WIT (SETU) for nearly 20 years, since the humanities building on the Cork Road was built.

That should make us all nervous. Given the national and international financial and economic situation and the probability of a significant pull back in the government’s capital expenditure budget, the great fear is that the resources train will arrive empty in Waterford because of demands from other sectors.

This investment under Project Ireland 2040 was to be in in two bundles with a focus on STEM, ICT, Engineering and Life Sciences at 11 Institutes of Technology in and Technological University campus locations around Ireland. On August 18, 2020, Minister for Further and Higher Education, Simon Harris announced a key milestone on a programme to deliver 11 new higher education buildings, to facilitate some 8,000 additional student enrolments. The tender for the first bundle under this PPP would proceed to tender immediately to include six projects in the eastern and southern regions and in the midlands. These projects were in the TU Dublin Tallaght and Blanchardstown campuses; in CIT and IT Tralee, which were to merge to create the new Munster Technological University in January 2021; in the Institute of Art, Design and Technology, Dún Laoghaire; and in Athlone Institute of Technology. The second bundle of five projects included was expected to go to tender in Q1 2021. The projects were located in WIT and IT Carlow, which were part of the consortium seeking to establish a Technological University for the South East; in GMIT and Letterkenny IT, which were part of the Connacht Ulster Alliance; and in Limerick IT which formed a consortium with Athlone IT.

All the projects in the first PPP tranche are well underway and will deliver new facilities to, amongst others, Dublin and Cork, the two places which need them least. Minister Harris made the decision to place the new engineering building at WIT into the second tranche for reasons of his own. Had it been in the first tranche of PPP, it would be under construction now.  The anecdotal rumour is that Minister Harris delayed the WIT building to force our college into the TUSE process with Carlow. That’s where we are now, but still without the capital investment. The second bundle of the PPP, which includes our engineering building, was preliminarily advertised in September 2020. A tender process closed on March 5, 2021, with four companies registering their interest: BAM, Enbarr, EquiSisk and Sacyr. The project may have been retendered since, with no further action to date. When will we see progress?

On the subject of the purchase of the Glass site for WIT, we have Jesuitical reasoning. It is misleading for anyone to suggest that negotiations for this only commenced in May 2022, when SETU was formally established. Tánaiste Leo Varadkar stated in the Dáil in February 2021, “We’re very strongly supportive as a government of expanding the footprint of the TU in Waterford City and are examining the old Waterford Crystal in particular as a potential site that could be purchased and used to expand the TU once it’s established.”

It is common public knowledge that WIT management were in negotiation with the site owners for some years. It is also relevant that if WIT were an independent entity they would have purchased the site themselves years ago in the same way that UL bought an old Dunnes Stores shopping centre in Limerick. Financial independence was always denied the Institute of Technology sector (including WIT) to keep it under the thumb of the HEA and the minister for education. That financial independence has still not been allowed to SETU.

We are the only city region without a national “normal” university and as such there must be allowance made for that. Apparently Minister Harris will be in Waterford sometime next month. Should he come bearing only the news that “DEPR have granted permission for formal negotiations to commence on the purchase of the Glass site”, then it will be obvious where his ambition for Waterford lies.