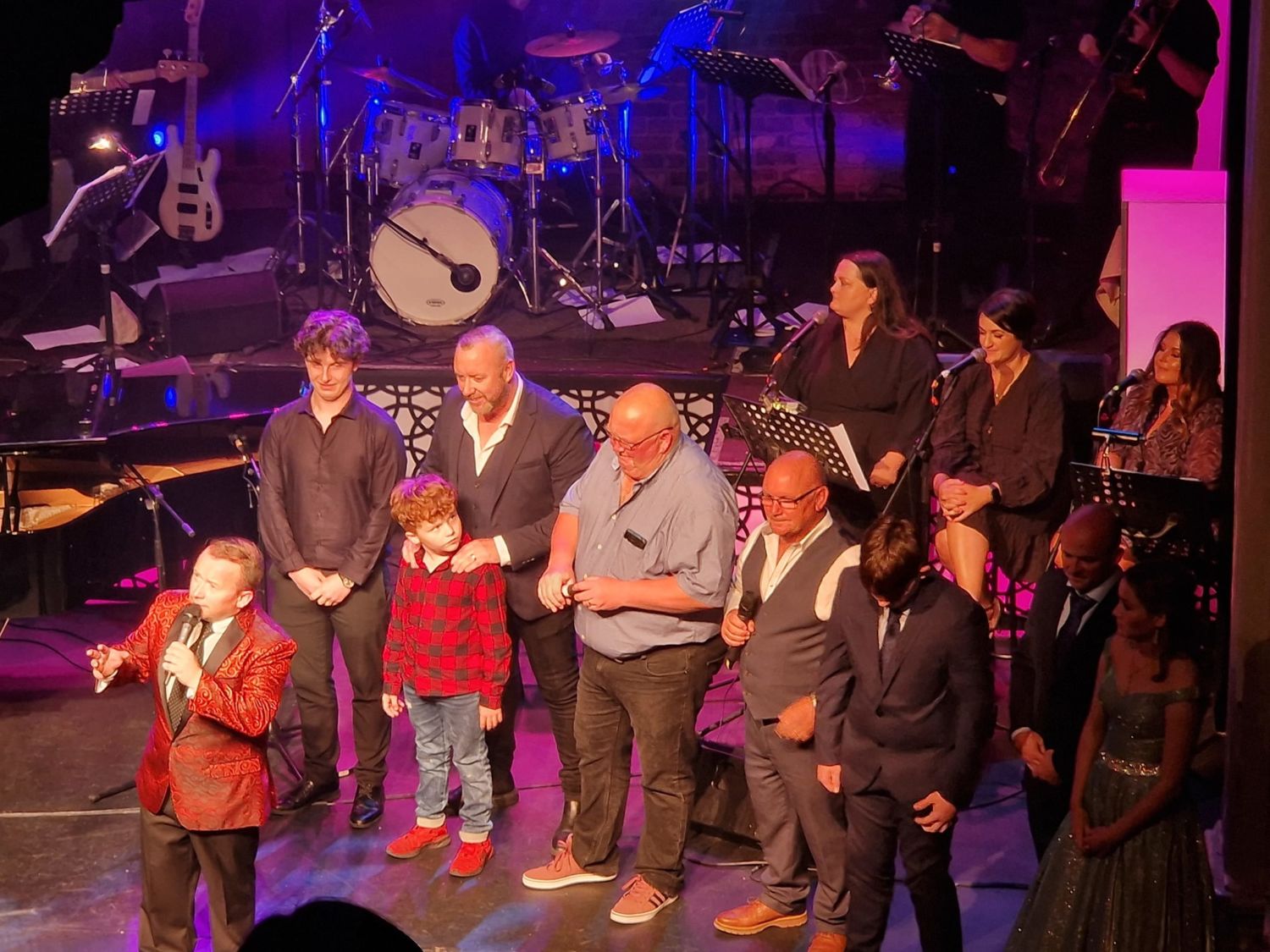 The Hayes family perform at the Dick Hayes Tribute.

IT’S a show that does exactly what it says on the tin. An evening in the Theatre Royal that is packed with his friends and fans to celebrate the life of a man who was born with an extraordinary gift to sing and entertain and constantly re-invent himself as singing fashions changed and new performance styles emerged.

Dick’s magnificent ballad voice was always going to be in fashion and his lifelong friend, fellow-performer and journalist John O’Connor filled us in on the life and times of his old friend. Dick went to London at the early age of 17 and was immediately signed up by well-regarded agent Larry Barnes who had pop-stars such as Matt Munroe on his books. But it was the Beatles era of guitar bands and big-ballad singers such as Dick were falling out of fashion and so Dick returned to the city that loved him so much.

“And then Dick met Martin Hayes,” explains John, “and life suddenly looked a lot brighter.” As anyone who attended The Boat Club dances in the late fifties and early sixties with Don Duggan and the Avengers would tell you. The audience laughs when he remembers rowing people across the river in the darkness after Dick and the boys had them dancing and laughing all night.

Dick moved on to the Decca showband that was managed by Noel Sinnott who also had record stores in Johnstown and Michael St. The showband era was also drawing to a close and Dick’s ability to re-invent himself stood to him yet again. There followed a succession of cabaret groups that attracted loyal audiences – many of them were sitting in tonight’s audience –  greeting all these reminiscences and songs with affectionate “aahs… yeses… mms” as memory travelled down nostalgia lane to the Showboat, the De Luxe, the Majestic and Alfie’s. Especially Alfie’s and my sporting hero is here with anecdotes of trips to Swansea and nights on the hill and video footage to go with them.

I’m not quite sure if Dick was ever actually a member of the Barrack St. Band but much-respected Musical Director Georgie Brett is here to describe his old friend as an honorary one. Dick was always available to the band for fundraisers and for the annual Christmas day bash following the band’s participation in the celebration of Christmas morning mass at the cathedral. The audience roars with laughter as Georgie recalls one Christmas day knees-up at the band room when Dick’s exasperated wife Nancy arrived over to the band room with his Christmas dinner at 5pm while Dick was in full voice.

It’s that kind of evening. Dick’s brothers and grandchildren sing and remember the balladeer with the golden voice that never aged and that held onto those finishing top notes that seemed to last an eternity. A special feature of this evening is video footage of Dick in full voice along with imaginatively simulated duets between tonight’s performers and Dick’s recordings of numbers such as “Grace” that has the audience singing along. In fact, the audience never stops singing along. 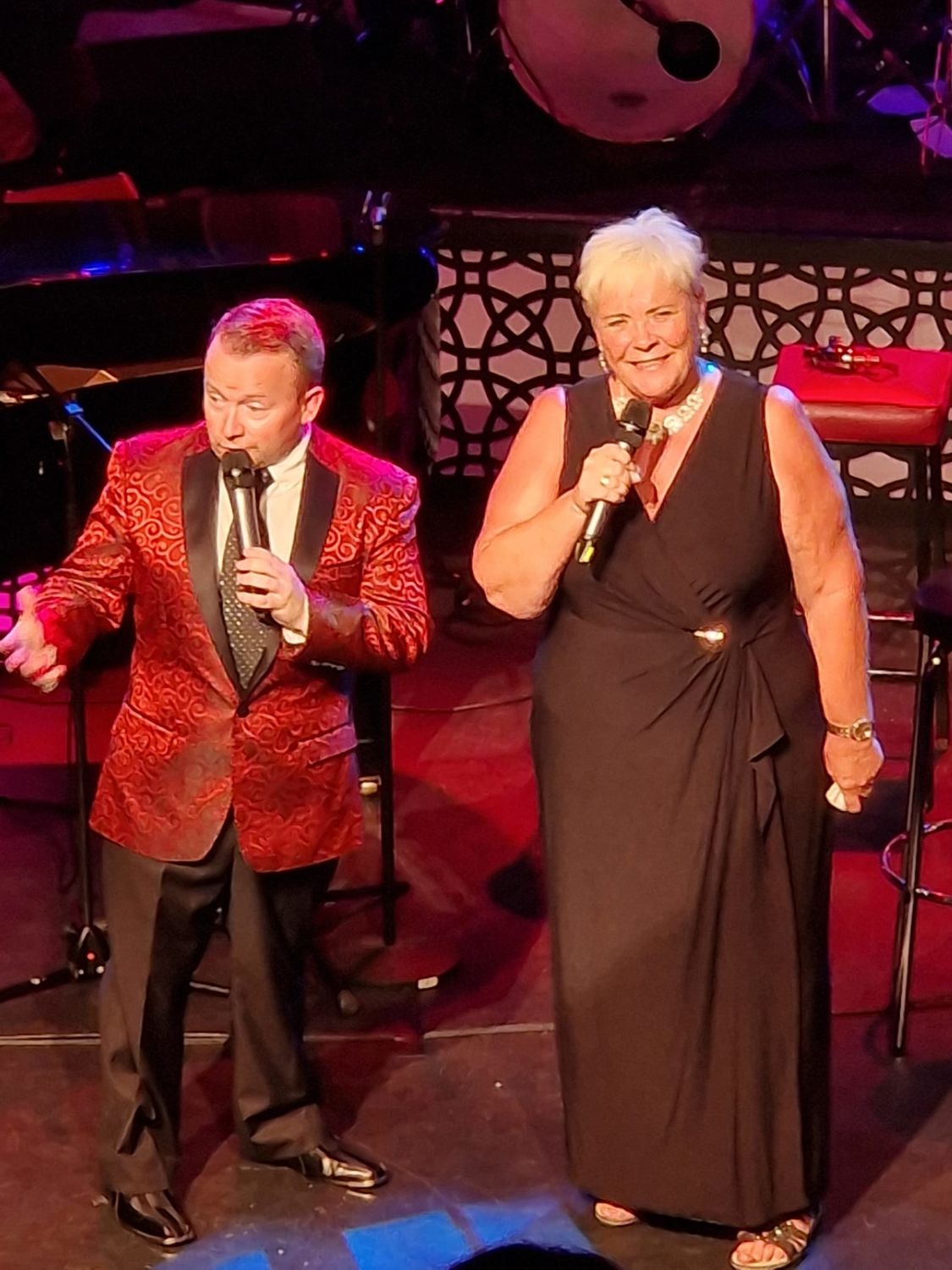 Tops memories flood across the apron of the stage. John Hayes revives his old Tommy Cooper routine, while Matt Keane and Timmy Ryan tell tales that have the audience roaring with laughter… Dick singing on his mike from everywhere including… the loo!… the roof of the stage in the Majestic, while dressed in bizarre stars and stripes regalia.

Timmy also recalls all the work that Dick did for charity… singing in nursing homes, at funerals and, of course, at mass. Matt mentions Dick’s last “gig” – at Christmas morning mass where he sang “O Holy Night” on the morning before he died. It’s the perfect way to remember a legend of Waterford music that brought so much joy to so many Waterford people – through his life, his talent and his generosity.

Dick’s son Richie’s hosting tonight is brilliant. Richie is compere, raconteur, gossiper supreme and has a word for everyone in the audience. Dick’s son is blessed with that same golden voice as his father and his Joe Dolan set has the house rocking. His on-stage ease is perfect for such an evening and this older audience clearly has a place in their hearts for Dick’s son. A great night of nostalgia at the Royal for a legend of the Waterford music scene.

God bless you, Dick, you were one of our own.