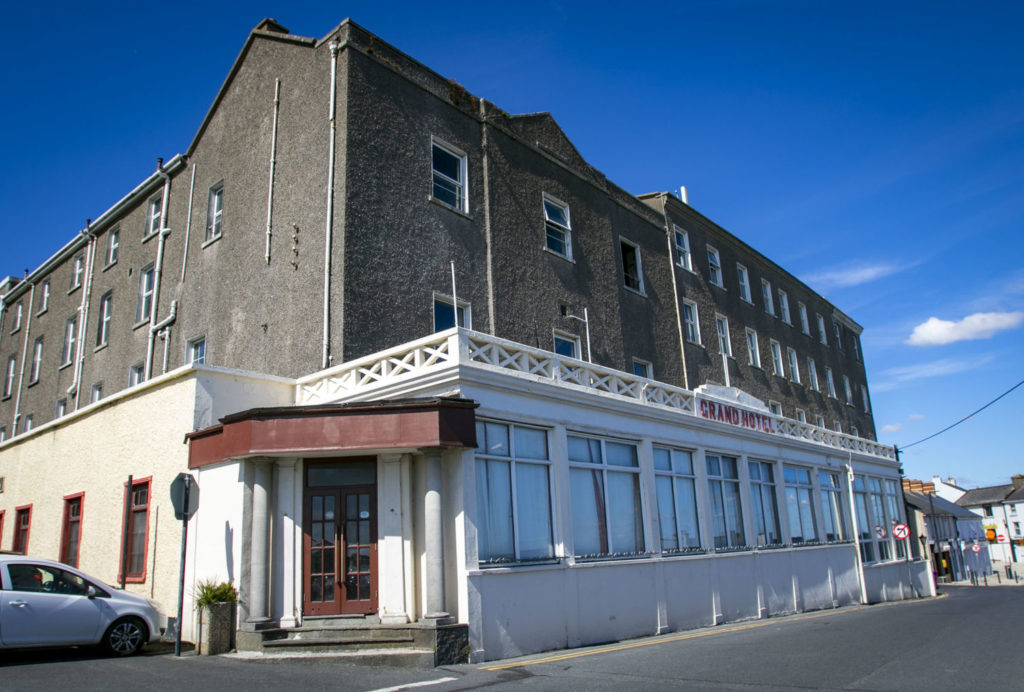 The exterior of the Grand Hotel as it is today. Photo: Joe Evans

FOLLOWING the news that the Grand Hotel – one of Ireland’s oldest hotels and once the jewel in Tramore’s crown – is officially up for sale, the Waterford News & Star stepped through its doors this week, and looked back on its illustrious history.

At the end of December 2013, the Grand Hotel, with its 81 bedrooms, ceased trading for good, although staff and customers didn’t know it at the time. Management had assured them that they would be back to work within a month or so but as the weeks went on, fears grew that the doors were to be closed for good. On February 11, 2014 a notice was placed on the Grand Hotel’s website announcing its permanent closure. “It is with great sadness that we announce that the Grand Hotel Tramore has ceased trading after 30 years owned by the Treacy Family. We wish to thank all of our customers for their business and support over the years – thank you.” 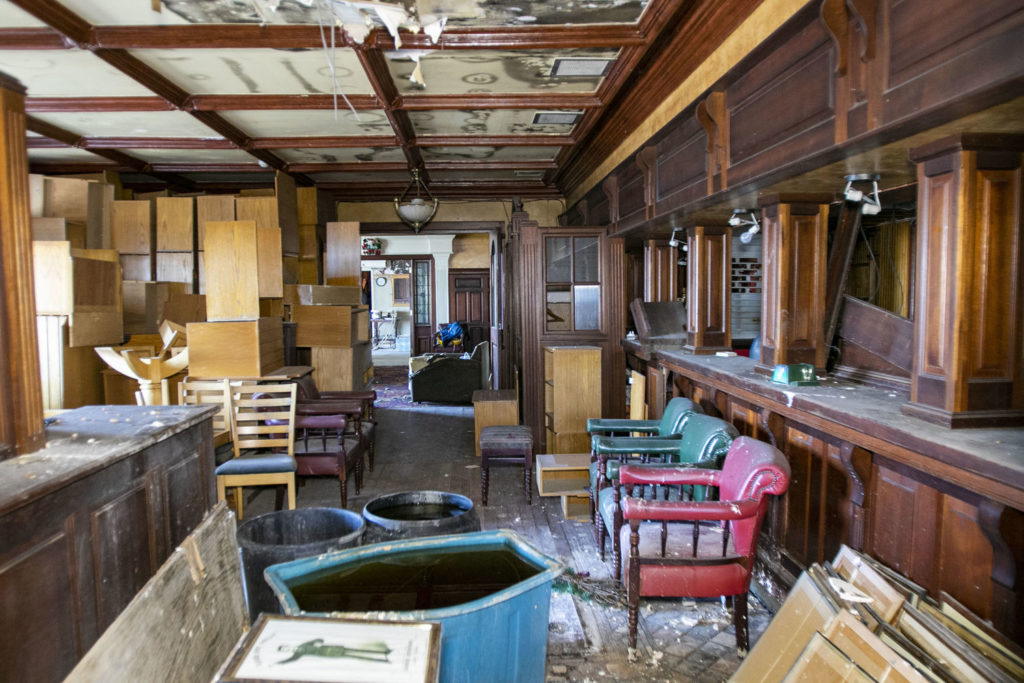 The old Bar in the Grand Hotel. Photo: Joe Evans

The hotel had been trading in Tramore for 224 years. Speaking at the time of the closure, Tramore Town Councillor Maxine Keoghan said that it was a “devastating loss for the town”.

“It’s a devastating loss, not only for the owner and employees but for the overall town aesthetic, which is also the heart of Tramore’s Victorian past,” Ms Keoghan said. “The Grand Hotel is not only the oldest hotel in Tramore, but is one of Tramore’s oldest structures, which was built in the eighteenth century by Bartholomew Rivers. Throughout the years, the Grand Hotel was noted for its style and ambience, with a guest list that included church dignitaries and prominent political and artistic figures.” 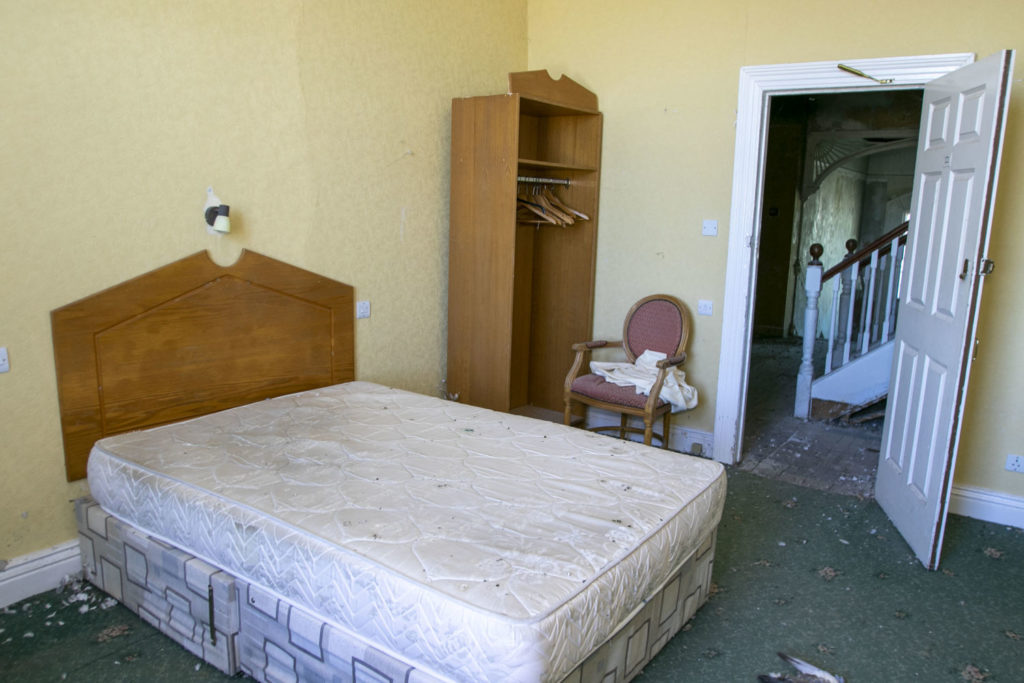 One of the old rooms as it looks today. Photo: Joe Evans

In December 2014 – 12 months after the doors were closed – the Grand Hotel was put up for sale in an online auction for a reserve price of between €520k and €570k. It had been reported earlier that year that there were “many interested parties” viewing the hotel. Surprisingly, the Allsops online auction of December 9, 2014 ended with the famous hotel receiving no offers at all. Some time later, it was purchased by a Chinese businessman named Colm Wu. On Tuesday, June 7, 2016, Mr Wu set up Tramore Celtic Grand Hotel Limited, seemingly with the intention of refurbishing the hotel, which was in visibly poor health. For reasons unknown, the hotel never reopened and is now up for sale, for €1.5m more than its 2014 reserve price. 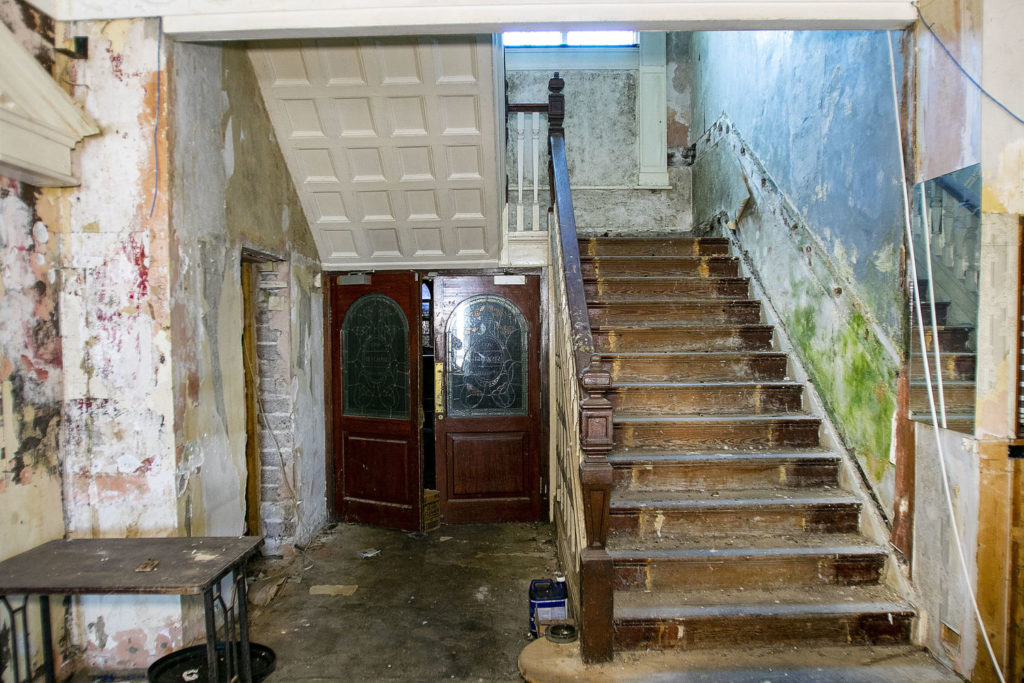 The stairs to the rooms and the entrance to the Ballroom. Photo: Joe Evans

This week, the Waterford News & Star accompanied John Rohan, selling agent for the hotel, and a member of the Wu family into the hotel with a warning to “watch where we were going”. As the photos of Joe Evans show, for the most part, it looks like time has stood still for the hotel. For the many Waterford people – and especially Tramore residents – who have worked, played and rested in the hotel, its abandoned site is as fascinating as it is sad. Keys, which once opened doors to all kinds of possibilities, gathered dust in the same cubby holes that they sat in back in 2013, fully expecting to be used again some time. There were old beer mats, kegs, and glasses, all of which witnessed some great nights down the years. The legendary ballroom, which is smaller than remembered, is now full to the ceiling with beds and mattresses, having been stripped from the 81 en-suite bedrooms. The main residents of the hotel now are pigeons and the carpet is almost entirely covered in their droppings. 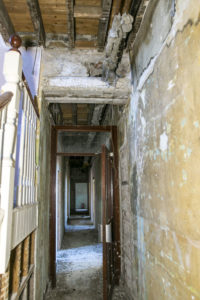 Upstairs in the Grand Hotel and the corridor leading to the rooms. Photo: Joe Evans

There are holes in the ceilings and we were warned not to go higher than the second floor for “health and safety reasons”. It’s an eerie sight, walking down abandoned corridors, stepping into rooms that were once filled with so much life. It’s almost difficult to imagine how they could ever come back to life. However, John Rohan believes that’s exactly what will happen. 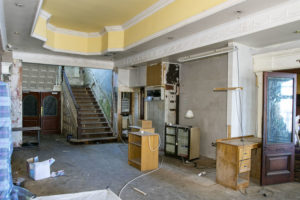 The reception area of the Grand Hotel as it looks today. Photo: Joe Evans

“There’s been considerable interest and we are actively talking to people about the hotel,” John said. “It’s early days yet, and we’ve only just completed the brochure but it is an iconic hotel and once we go to the market this week, I expect a positive response. It is in a poor condition, but we’re selling the location. We’re selling Tramore. It’s the best place there is and the views are just fantastic. We have a list of quality hoteliers that have already made enquiries about the Grand and other hotels so we will be contacting them as well. We are extremely hopeful.”

And so we wait to see what the next chapter of the Grand Hotel has in store for us.