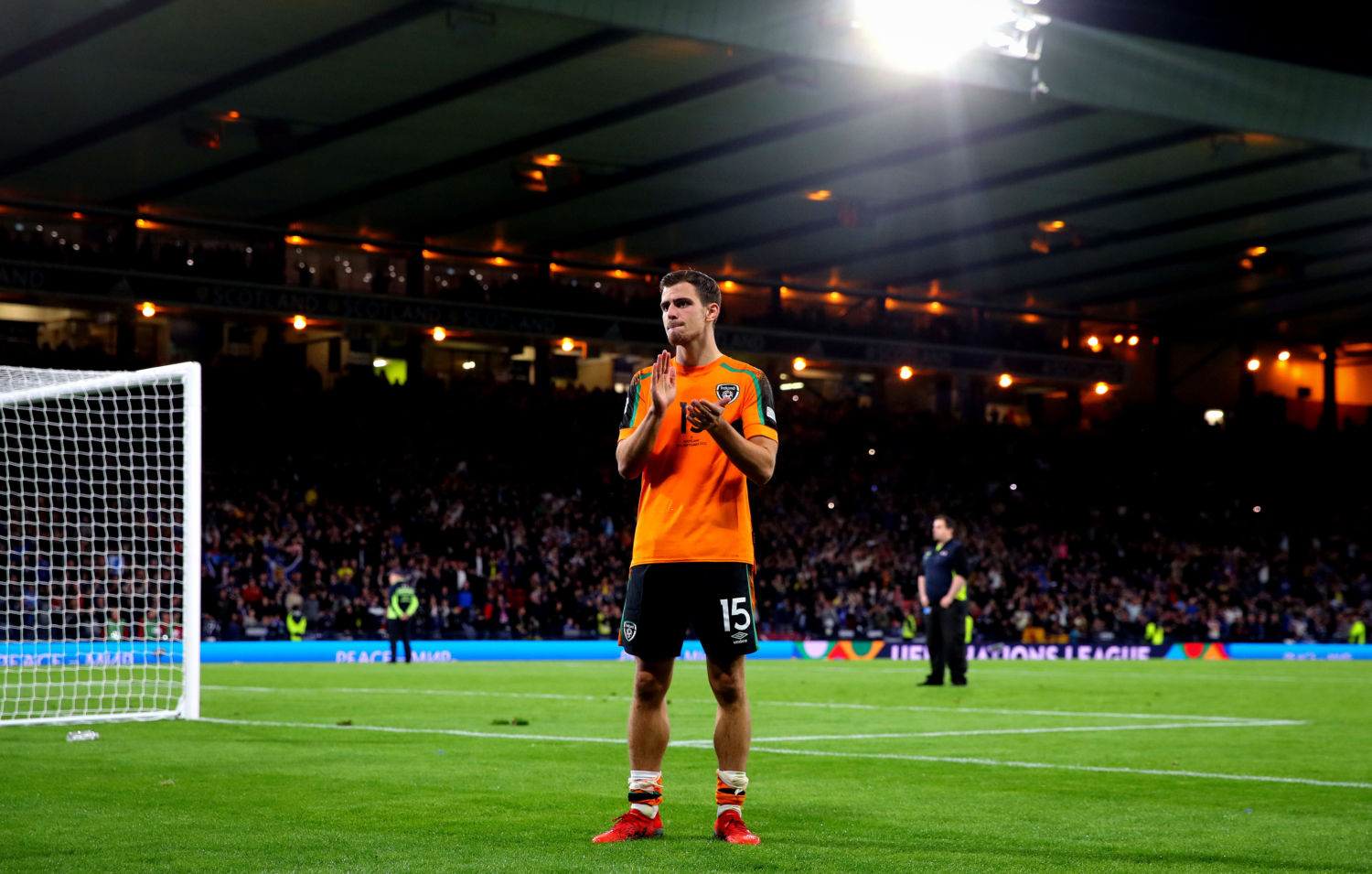 Waterford’s Jayson Molumby salutes the Irish fans after their defeat to Scotland in Hampden Park on Saturday night. Photo: Inpho.

Waterford’s Jayson Molumby expressed his “disappointment” after the Republic of Ireland slipped to a 2-1 defeat against Scotland in their UEFA Nations League game played at Hampden Park on Saturday evening as the hosts came from a goal down to win.
After recording a 3-0 win over the Scots when the sides met in Dublin earlier in the campaign, Stephen Kenny’s side were a goal to the good at the half-time break through a John Egan, but the hosts struck twice in the second-half to secure a win.
After picking up the man of the match accolade as part of the RTÉ coverage of the game at Hampden Park, the Cappoquin native when speaking to Tony O’Donoghue said: “It’s obviously disappointing. I haven’t had the chance to process that defeat to be honest. Obviously we went in one nil ahead at half-time, and I thought that we were very comfortable.
“We just didn’t start quick enough in the second-half, and it’s ultimately after ending up costing us so. I’m not sure what happened in the second-half. We’ll have to sit down and analysis it. I just don’t know to be honest, but for me I just don’t think that we started quick enough.
“We knew that they were going to start quick second-half, and yes it’s disappointing for us. I didn’t have a view of the penalty, and that’s obviously something to look at as well, but for me, the penalty shouldn’t come about in the first place.”

TOUGH GAME AND ATMOSPHERE
“I don’t think that we should concede the first goal so early in the second-half. We had a couple of chances as well that we’ll be obviously disappointed with that we didn’t take. I think that we should have finished the game off.
“Obviously what we done to them the last day at the Aviva, we were expecting a tough game and atmosphere. That was always the way it was going to be here this evening. I thought in the first-half that we were excellent and we were organised.
“We matched them in every battle all over the field and won every second ball. We’re just disappointed because that seemed to fade in the second-half. I can feel the growth in this team. We beat Scotland 3-0, we should win against Ukraine and should win tonight. It’s disappointing, but we’ll take a lot of positives, and we’ll try put it right against Armenia.”

Ireland are back in action tomorrow (Tuesday) night when they take on Armenia at home in the Aviva Stadium at 7.45pm in a game they really must win to avoid relegation.