“Hugo O’Donovan was born to perform” 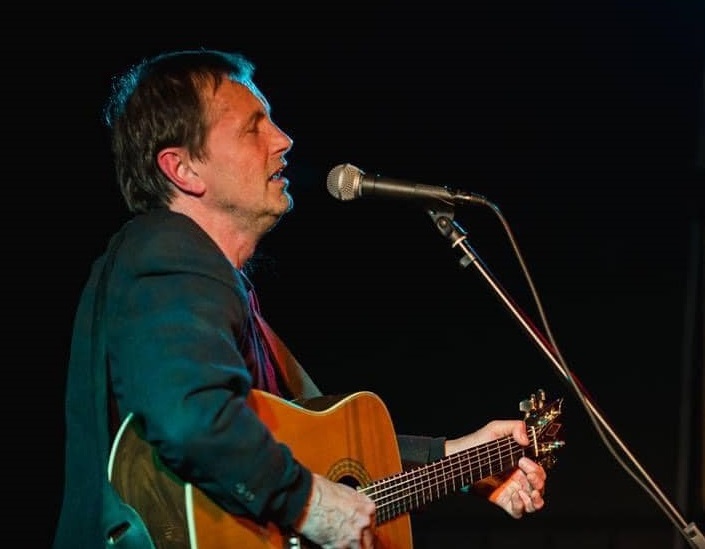 Actor and performer Hugo O’Donovan, who died on Saturday, September 17. “We’re devastated to hear of the passing of our dear friend Hugo O’Donovan,” read a Facebook post by Central Arts. “Rest well Hugo, you will be sadly missed.”

HUGO O’Donovan, who died on Saturday, September 17, was ‘known widely and (was) deeply loved for his exuberant, passionate and totally unique way of walking in this world’.

The actor, performer and director, of ‘Couse Mill’ on the Old Tramore Road was a company director with Waterford-based Guildhall Construction, the firm which did sterling work at Jordan’s Bar on The Quay.

Married to Patricia and father to Emilyrose, Hugo was a regular collaborator with a host of local directors down through the years, including Jim Nolan. Since the sad news broke, the tributes extended to Hugo have been as heartfelt as they’ve been plentiful.

“It was with disbelief that I learned of the death of Hugo O’Donovan last week,” said Waterford News & Star Arts Correspondent Pat McEvoy.

“I knew Hugo since he was a young teenager who lived on the back road to Tramore at Blackcaps. He was regularly in The Little Theatre in Henrietta Street where his sister Caroline – who went on to have a very successful career as a professional actress – appeared in a number of Waterford Dramatic Society (WDS) productions that I was cast in.”

Pat continued: “Hugo O’Donovan was born to perform. I had the privilege of sharing the stage with Hugo on a number of occasions and I recall, in particular, his tour-de-force performance as Biff in our production of ‘Death of a Salesman’ that played to packed houses at the Theatre Royal. We were also cast in a local film ‘Late Night Poker’ where, yet again, Hugo played a huge role.

“He was multi-talented and the most giving of performers. Everyone that shared the stage with Hugo always remarked on his ability to draw out the best of performance in his fellow actors and the unending sense of camaraderie that he created. Above all, Hugo had that great sense of fun that made him so likeable. He was a friend to everyone he performed with. Hugo was always full of news of things he had done or was about to perform and loved his gigs at Central Hall where he carved out a niche for himself as a singer/songwriter. God bless you, Hugo. You were one of our own.”

In a Facebook post, friend Ollie Breslin said that Hugo’s willingness to accommodate all manner of requests, including his frequent counsel to several Waterford Youth Arts productions, was always appreciated.

“He never seemed to say no,” said Ollie. “And with young people directing him, he would give them the same respect, energy and commitment as he would if he was working with Jim Nolan.

I met him at John Buckley’s removal in Thompson’s a few weeks ago and told him that he was very good in the short film by Steve O’Connell, ‘The Funeral Path’, and he was delighted to hear that it was good and worth seeing. He was always fun to work with and always had a glint in his eye that brightened every rehearsal, stage or social occasion. We are all a bit sad and in shock that he is gone but we will remember him with a smile on our faces.”

Anna Jordan said that Hugo “was so much to so many. He managed to bring an extra energy to everything he did and all at Jordan’s will miss him forever. He was great craic on the Jordans Sesh and every stage in Waterford is echoing memories. There he is down there in the pic with his work brother Tony, on the top of Jordan’s with the Eagle. He’s braver than many.

Thanks to Hugo and his Guildhall Team our lovely building on the Quay is strong as an ox and will outlive us all. Hugo had been part of the Jordans fabric for many decades through friendship, scene and labour. We’d like to send our love to his family and friends”.

Heartbroken playwright Martina Collender described Hugo as one of the greatest actors she ever got to work with.

“He was so talented and worked so hard and was so very kind to me in my early days of stage managing when I didn’t have a clue what I was doing. He was so very talented on and off the stage, with his acting and ability for music. He was a charmer and an absolute gentleman.”

Martina added: “I saw him perform at Central Arts Open Mic Nights and he had the whole audience on their feet. He deeply loved his family; I know because of how his voice sounded when talking about them. A cheeky grin and a joke for everyone. We danced in shorts together one night, drunk on giddiness and the love for life. Once during the tech for ‘Mount Prospect’, I was sellotaping carpet in the wings and he asked if I wanted help (even though he was on stage taking notes from Jim [Nolan] and very busy!) And when I said no, he made me a cup of tea and bought it out to me…he had a beautiful ability for to make you see the best in yourself. He was terribly funny, always joking and keeping spirits up. He was beautifully kind giving advice a plenty to young people like me who wanted to be involved in theatre. He worked so hard at his craft which he was talented at making him one of the true greats.”

The strength of Hugo’s spirit was commented upon by Craig Ó Mathúna: “I’ve never seen such a passionate and free soul on the stage, singing and playing like the world depended on it, and it did. He brought a righteous fire to the stage, and a true, kind and gentler warmth to everyone when he was off of it. I knew him only a short time in total spent together at gigs and our chats online, but I saw him as a true friend, a fellow musical soul and crusader. Hugo will always be an inspiration to me, and I’m sure to many. Light like his never goes out, it simply transforms. Sing on dear Hugo, as I know you always will.”

Obituary: Caroline Comerford was as thoughtful as she was kind