A TRAMORE Garda has been recognised by the Order of Malta and the National Ambulance Service for her role in saving the life of a man who experienced a cardiac arrest on the side of the road earlier this year. A private gathering was held in Tramore Order of Malta station on Tuesday, September 20 to celebrate the efforts of Garda Caitlin Kelly, who administered life-saving CPR to Thomas Flood. He was in attendance last Tuesday to offer his thanks. 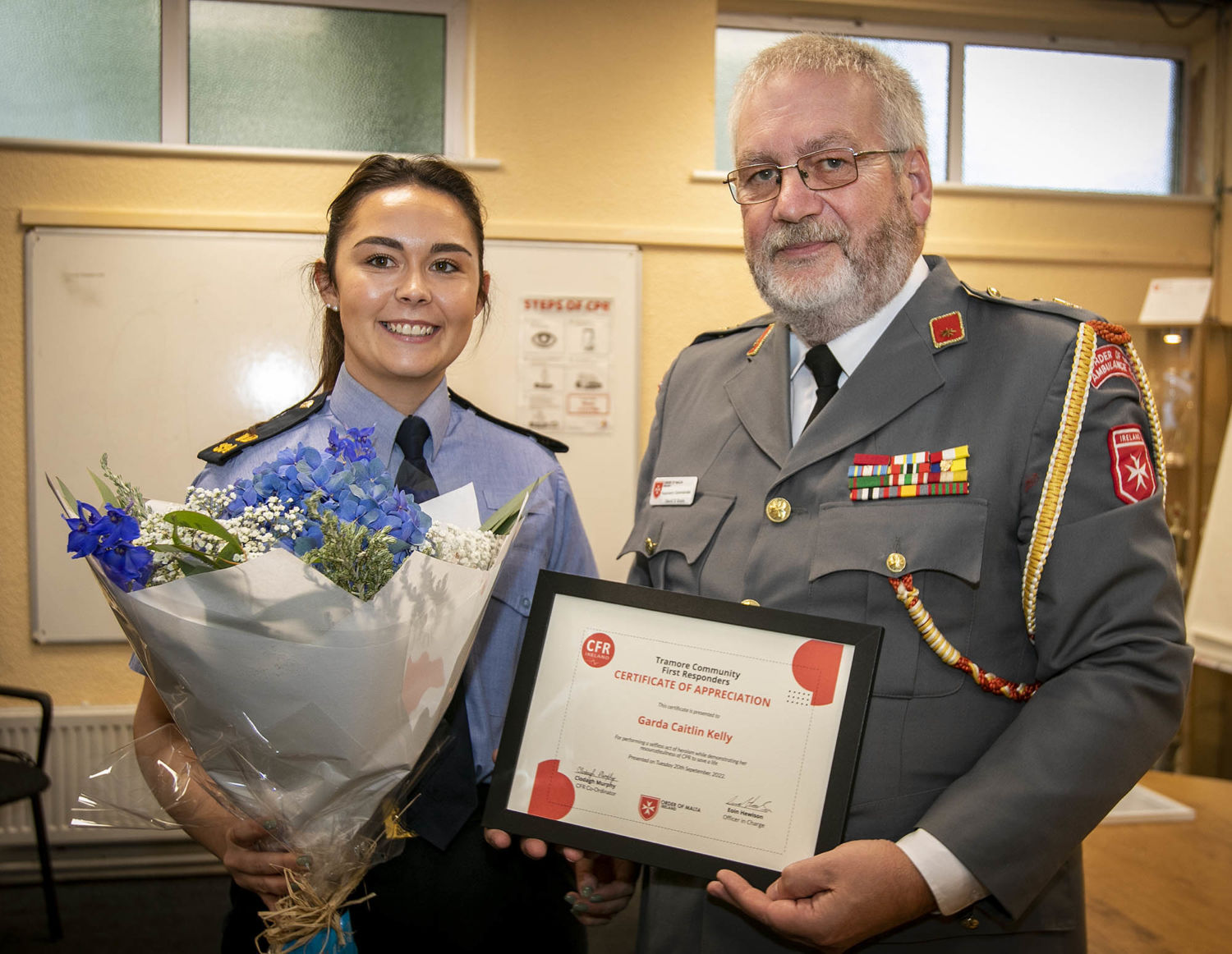 Garda Caitlin Kelly received a Certificate of Appreciation from David O’Grady, Regional Director Order of Malta, for performing CPR to save a life. Photo: Joe Evans

Speaking to the Waterford News & Star about her actions on that day, Garda Kelly said: “I was driving down the Old Waterford Road towards Tivoli Terrace and I noticed a male lying on the road, he had blood coming from his head and I immediately parked the car.”

Garda Kelly very quickly realised that the male did not have a pulse and she radioed for assistance from her unit. While waiting for assistance, she immediately began administering compressions and CPR as per her first aid training.

Present on Tuesday were members of on An Garda Siochana, the Order of Malta, and the National Ambulance Service to partake in and witness the presentation of awards to Garda Kelly.

Chief Superintendent Padraig Dunne is responsible for policing in Waterford, Kilkenny, and Carlow, and while he is based in Waterford city, he lives in Tramore so this was of a personal nature for him.

He said: “I’m just delighted to be here this evening to celebrate this achievement by Caitlin. I’m delighted to know that there are people here to help, people who if I had an incident of a similar nature, that Caitlin and others might be around to help me.” 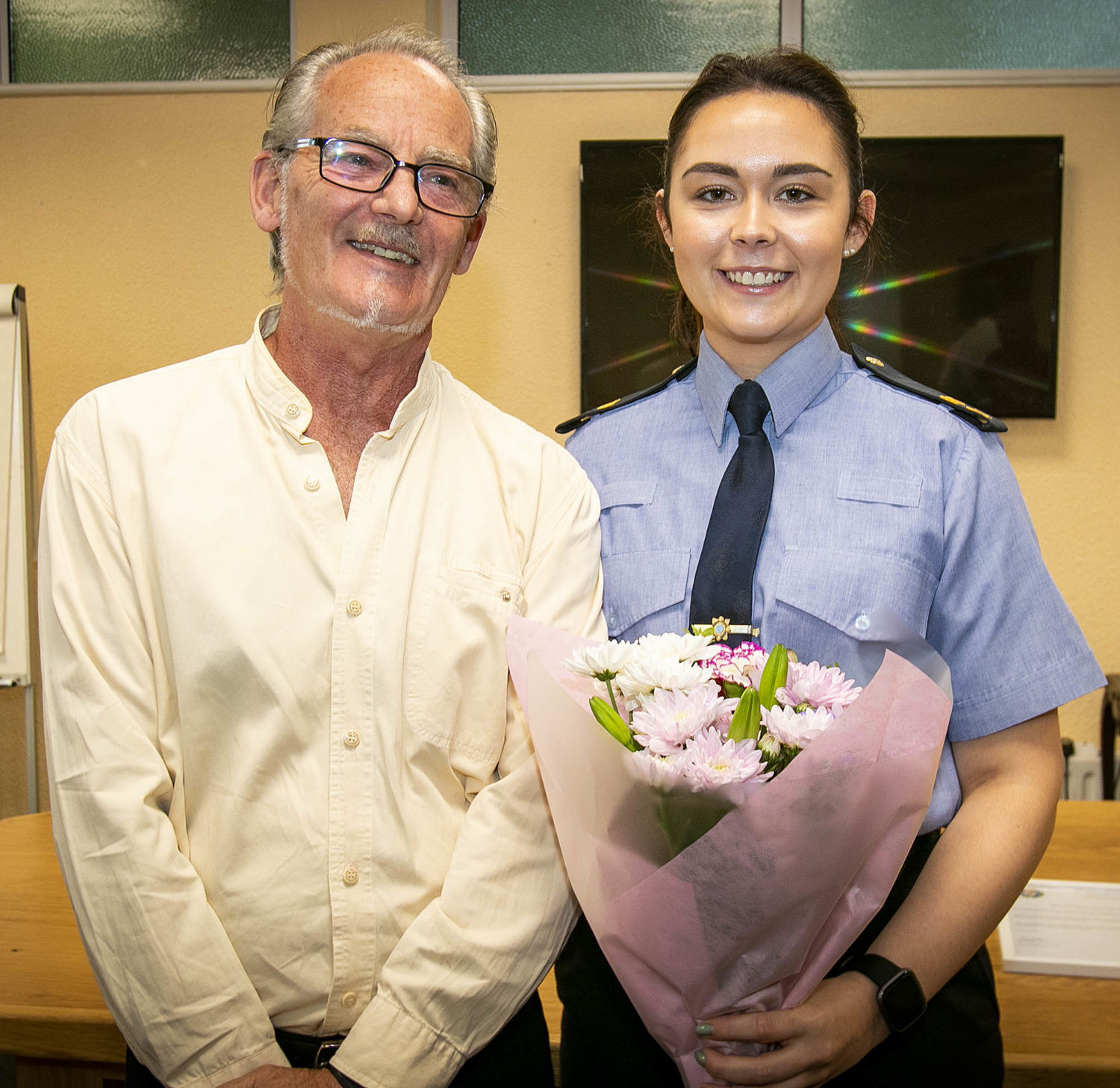 Tommy Flood with Garda Caitlin Kelly, who performed CPR on Tommy which helped to save his life. Photo: Joe Evans

Newly appointed to the Tramore region, Superintendent Fiona Fogarty was not the operational commander at the time the incident took place in April of this year, however she had known Garda Kelly well from Templemore Garda College.

“I was in the Garda college when she was doing her training (during) the intake at the start of the Covid pandemic,” said Superintendent Fogarty. “She did incredibly well in her training in the Garda college so I’m not at all surprised that she performs so well down here in Tramore. We are incredibly proud of her for her response on the date and it really made a life-changing and life-altering outcome for Mr. Flood. I’m so glad you’re here with us today, it’s a team effort always when we are first responders but it really illustrates how incumbent it is upon us to have the requisite training and Caitlin would have got that training in the college. Caitlin is a proud Tipperary woman and her family are here with her today, her Mam and her sister, and again I think they’re very proud of her as well and the response that she gave.”

Having received the first responder training during her time in Templemore Garda College, Garda Kelly was brave enough to react and to put that training into practice. This is something which David O’Grady, Regional Director of the Order of Malta for Wexford, Waterford, Carlow and Kilkenny, commented is not always an easy thing to do.

“One of the apples of our eye is here in Tramore, as they have been responding 24 hours a day, 365 days a year. Caitlin epitomises the emergency services, that it just transfers right across the board that your training was put into action above and beyond the call of duty. To be able to hand Mr. Flood back into the loving arms of his family just says it all. For what Caitlin did, it takes heroism to go out there with the training and then to actually put it into action, that takes dedication.”

While Caitlin was quick to dismiss her efforts as being a case of ‘right place, right time’, Mick Fanning for the National Ambulance Service said the direct consequences of her actions were that Mr. Flood was sitting right there in the room to thank her for saving his life.

Garda Caitlin Kelly said: “I feel like everyone else here is out doing a lot more than I am, you’re dealing with this on a daily basis. I’d like to really thank everyone for organising this, it is a true Tramore thing that everyone is so nice. If this was anywhere else, I don’t know if this would be happening and thank you so much for the recognition.”

While the award ceremony was ongoing, Thomas Flood sat with flowers in his hands for the Tipperary woman who saved his life. Originally from Clontarf in Dublin, Thomas spent two decades working in China before moving back home to settle in Ireland two-and-a-half year ago. It’s not a usual occurrence to sit in a room surrounded by others, to pay homage to someone who saved your life. 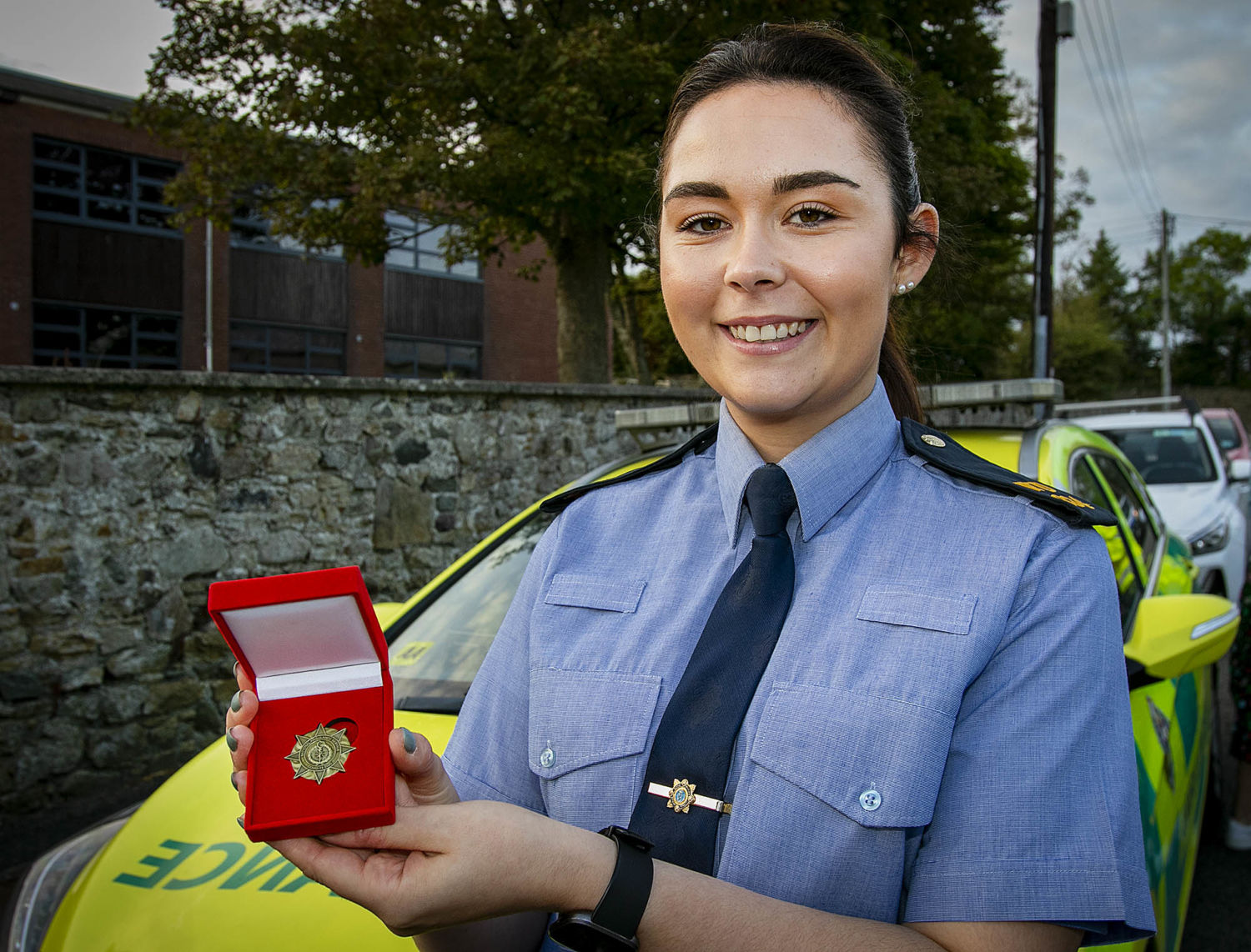 Garda Caitlin Kelly, who was honoured at Tramore Order of Malta for performing CPR which helped save a life. PhotoJoe Evans

Speaking to this newspaper, Thomas said: “I didn’t know what had happened, only that I woke up in hospital. I had been working very hard all my life so I knew that eventually something was going to happen, there was a lot of strain. I wouldn’t call it a shock so much as a wake-up call.”

Since April, Thomas has seized what he sees as his second chance at life and he is living healthier and feeling better.

“If it had happened even on the other side of the road, the story might have had a different ending. This is all a little unusual because I’m not used to being the centre of attention, I prefer to blend into the background. I have my slow days and my fast days but overall I’m doing well and I just really want to thank her for what she did, for saving me.”