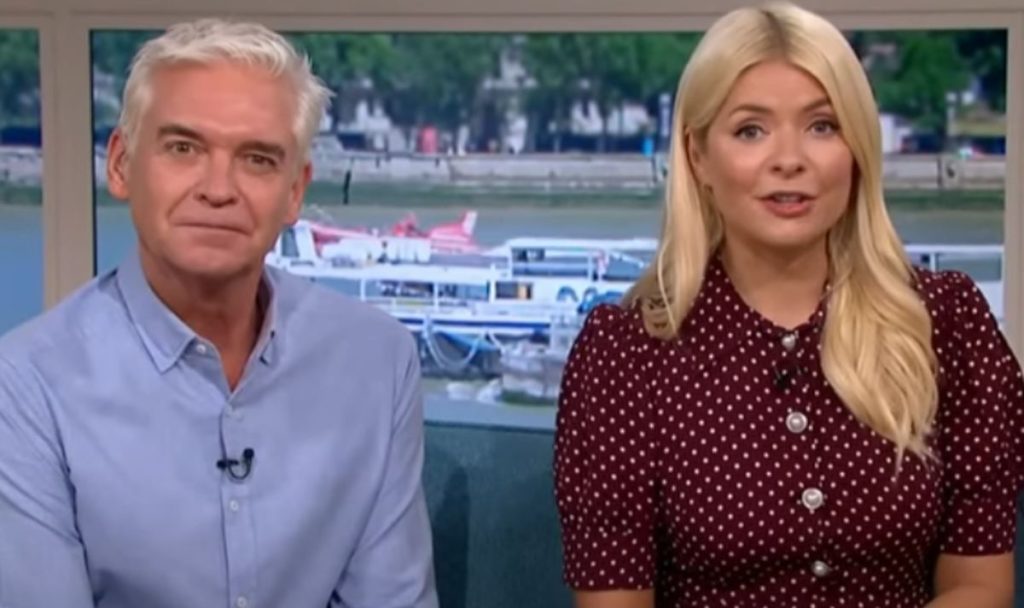 AS I write this column, a petition has been set up in England to have Philip Schofield and Holly Willoughby – two of the most inoffensive people in British media – removed from their jobs. 55,000 people have signed at last glance. It’s as ridiculous as it is unsurprising.

Last week, I was sick in my bed for a couple of days – there’s a bad doss going around don’t you know – and I was spending more time than usual on TikTok.

There, I found video after video of people, of little or no consequence, making videos about how disgraceful it was that Philip and Holly skipped a queue to pay their respects to the Queen.

First of all, it was equally as ridiculous and unsurprising how few people, outraged by the TV presenters, were actually able to spell the word ‘queue’, but that’s a different conversation for a different day.

I am now convinced more than ever before that we live in a world of pure and utter hypocrisy and it’s going to continue, and get worse and worse, until a giant mirror is placed in front of the perpetrators and they can see exactly what their behaviour really looks like.

Firstly, in relation to Philip and Holly, most of the people giving out about them couldn’t give two sh*ts about the Queen.

There’s something about outrage, and outrage alone, that irritates the life out of me. Social media has provided a platform for certain people, most of whom have absolutely nothing better to do, to be enraged by anyone they think has a better life than them.

There’s an underlying bitterness about how their lives have evolved and they use social media to take it out on everyone else. They hunt in packs as well. They see everyone else piling in on – in this case Philip and Holly – so the easiest thing to do is to join in. For future reference by the way, the easiest thing to do is roll your eyes and just get on with your life. It’s rarely worth taking on these people because they’ll pile on you too, and nobody needs that kind of negativity following them around for the day. They pile on in great numbers because they don’t really see Philip and Holly as real people. They’re ‘celebrities’ who, as we all know, are legitimate targets when it comes to online abuse.

Many keyboard warriors, who let’s face it, are probably not living their best lives, think that TV personalities are the complete opposites to them. No money worries, the best of houses and the best of clothes etc.

Because of this, they deserve to be abused online and their jobs taken off them, because they committed the heinous crime of, allegedly, skipping the queue to see the Queen lying in state.

Before you write that comment on the Journal.ie, or indeed under a Waterford News & Star story, have a think for a second. Is your outrage actually warranted? Do you really care enough about this to join the legion of the enraged?

A lot of people have clearly not learned from the aftermath of Caroline Flack’s death. It doesn’t matter what your profession is, whether it’s a celebrity or a politician, at the end of the day, you’re a human being like everyone else, and you go home to the people that love you, wondering why it is that everyone hates you.

Caroline Flack had mental health issues almost her entire life. That didn’t stop her from wanting to be a TV presenter though, as indeed it shouldn’t. She was riddled with insecurities and self-doubt, all of which contributed to a life of jumping from relationship to relationship, waiting for that one day where she could finally feel content.

That day never came and in the aftermath of an emotional breakdown, the type of thing that happens in private for most people, the same people who are attacking Philip and Holly for, let’s face it, NOTHING, piled on her.

A lot of people who posted hateful comments about her online would never dream of thinking that they contributed to her suicide. These people feel so strongly about how their world is so far away from that of a celebrity’s, that they don’t think their abuse will be seen. More often than not, it is seen and even if it’s not, it prompts others to join in.

Inevitably, after Caroline’s death, social media started to look a bit different – if only for a few weeks. People were posting a quote by author Jennifer Dukes Lee that Flack had requoted: “In a world where you can be anything, be kind”. Sadly, it wasn’t too long before the next victim of the enraged arrived.

It’s okay to be outraged, especially about the failings in our society and in our Government but we owe it to ourselves to use that rage constructively. Ask yourself before you say anything, especially on the internet, “What would my Nanny think of this…”