Blues host Cobh as Cup sold out signs go up 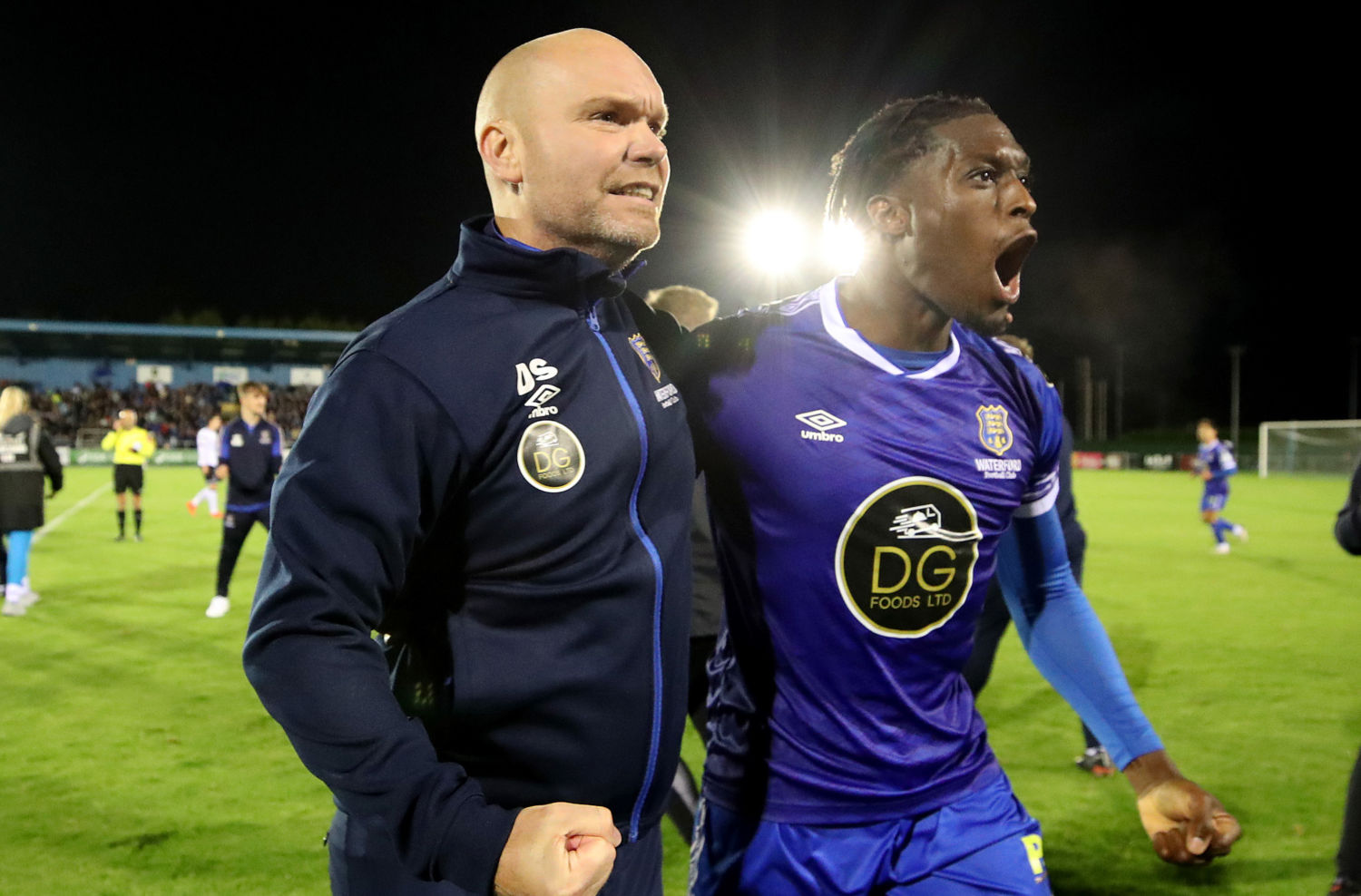 Danny Searle and Tunmise Sobowale celebrate at the final whistle of their FAI Cup quarter-final win over Dundalk. Both men are suspended for tonight’s visit of Cobh. Photo: Inpho.

With the SOLD OUT signs erected for stand tickets ahead of the eagerly awaited FAI Senior Cup semi-final against Shelbourne at the RSC on Sunday, October 16, Waterford FC will return to league action tonight when they take on Cobh Ramblers at the home with a 7.45pm kick-off.
Another bumper crowd is expected at the RSC for the game this evening where the Blues will hope to win over their Munster counterparts for the fourth time this season with the club also set to play on Monday next, October 3, away to Longford Town.
The news that the two stands have been sold out two weeks before the cup semi-final fixture is definitely a sign of exciting times ahead for the club under the new ownership of Andy Pilley, and it’s expected that up to 2500 standing tickets will be made available to fans in the coming days.
In an unpreceded demand for tickets for this cup fixture, the club made some tickets available to spectators attending tonight’s game where Danny Searle’s men will be looking to make it three wins on the bounce in the league to keep the winning momentum going.
Searle will once again have to sit out this fixture as he serves the second of a four-game ban after he was shown a red card by referee Alan Patchell in the feisty Munster derby defeat to Cork City, but will be happy that his side come into the game on the back of Sunday’s 3-0 win over Bray Wanderers at the Carlisle Grounds.
The side’s last meeting saw an in-form Blues ease past the Ramblers with a comprehensive five-star performance in St. Colman’s Park where two goals from Wassim Aouachria, and strikes from Cian Kavanagh, Junior Quitirna, and Callum Stringer, who has since left the club to join local Premier side Southend United, wrapped up the points.

“NO EASY TASK”
Speaking ahead of Friday’s match against Cobh Ramblers, head coach Danny Searle said: “Sunday’s game in Bray was another good performance. We did our jobs early and were able to control much of the game. More good goals scored, a first start for Alex [Baptiste] and another penalty save from Paul Martin too.
“Shane Keegan is an experienced coach and will no doubt be looking to pick up points before the end of the season. [Cobh] have got some good young players and we’ve seen them perform well against Galway, Treaty and Cork in recent matches so we know it won’t be easy. We want to keep our good form going and need to make sure we fully concentrate on Cobh.”