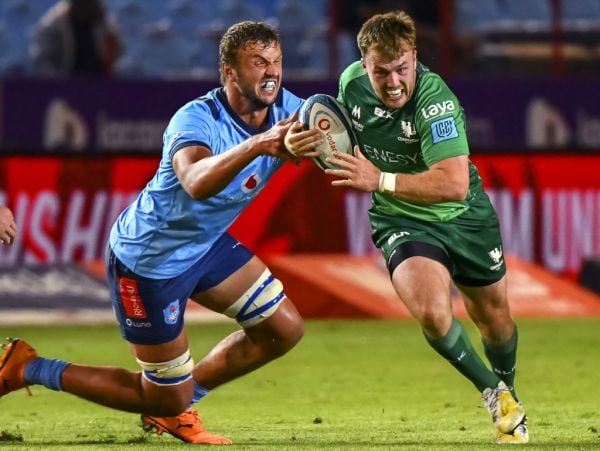 Connacht’s poor start to their United Rugby Championship campaign continued with a 28-14 defeat against the Bulls in Pretoria.

Connacht had plenty of promising moments, but they could not recover from a nightmare start as full-back Kurt-Lee Arendse and scrum-half Zak Burger scored tries during the opening 10 minutes at Loftus Versfeld.

Fly-half Johan Goosen converted both touchdowns, and he also added the extras to tries from Marcell Coetzee and a second by Burger, with prop Jack Aungier and fly-half David Hawkshaw claiming late consolations for Connacht, and Hawkshaw adding two conversions.

The Bulls showcased their enviable forward power after just two minutes when hooker Johan Grobbelaar touched down following a lineout drive, but the try was disallowed for a flying wedge movement.

Connacht players were back behind the posts just five minutes later, and this time there was no reprieve after Arendse sprinted clear for an opportunist try that Goosen converted.

The visitors were then shredded in defence by a blistering Bulls counter-attack, before Burger scored from close range and Goosen added the extras for a 14-point advantage.

Connacht looked to regroup, and their cause was helped by a yellow card for Bulls flanker Marco van Staden, but they could not reduce the deficit despite some attacking in-roads made by Ireland international wing Mack Hansen.

In terms of territory and possession, Connacht were firmly in the game, yet they were undone again just before half-time.

The Bulls’ patience was rewarded as skipper Coetzee powered over for his team’s third try, with Goosen’s conversion opening up a 21-0 interval lead.

Connacht fell further behind just minutes into second period as the Bulls clinched a try bonus-point when lock Ruan Nortje surged clear in open play and sent Burger over for his second score.

There was no way back now for the visitors, and it appeared a case of damage limitation as the Bulls threatened further scores.

Bulls’ replacement hooker Jan-Hendrik Wessels was then sin-binned for a late challenge, and Connacht capitalised through Aungier’s try that Hawkshaw converted, before Hawkshaw added the extras to his own touchdown during a strong finish.