Leinster triumph over Ulster at Ravenhill 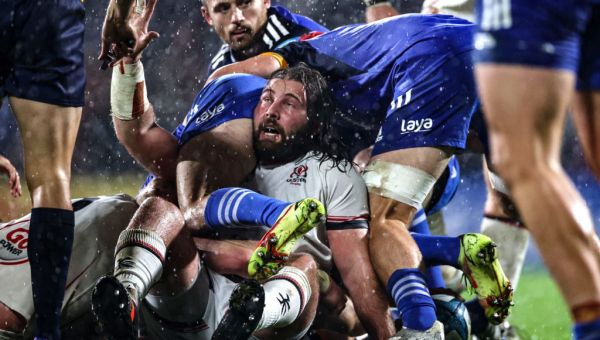 A dominant first half helped Leinster triumph 20-13 and go three wins from three in a top-of-the-table Irish derby clash with Ulster at a rain-swept Kingspan Stadium in Belfast.

Tries from Ryan Baird and Dan Sheehan, along with two conversions and two penalties from Ross Byrne, brought Leinster the four points on an evening when Ireland skipper Johnny Sexton made his first appearance of the season off the bench.

After trailing 17-3 at the break, Ulster battled back through a John Andrew try which was supplemented by two penalties and a conversion from John Cooney to claim the losing bonus point.

Leinster’s Baird scored the game’s first points after seven minutes when the visitors moved the ball at pace down the left flank, with quick hands from Garry Ringrose and Dave Kearney creating the space for Baird to make the corner.

Byrne added a great conversion to make it 7-0 to the visitors.

On 20 minutes, Leinster had their second try when Sheehan smashed his way over from a lineout maul which Byrne again converted.

The remainder of the half was dominated by a torrential downpour and the only score came from the boot of Byrne after Leinster opted for the posts with a 37th-minute penalty.

Jacob Stockdale failed to return for the new half after picking up a worrying-looking ankle problem, having endured a similar issue last season.

With Jimmy O’Brien sin-binned in the 61st minute, Ulster put the penalty to the corner and, from the maul, replacement hooker Andrew touched down. Cooney’s conversion cut Leinster’s lead to 10 points.

Ulster worked Aaron Sexton over the line in the 68th minute only for Charlie Ngatai to dislodge the ball in the act of scoring and the try was ruled out.

Cooney kicked a 71st-minute penalty to make it 20-13 to Leinster but, from there, the game petered out with neither side able to score again.